The eyewitnesses said the shooting was triggered by a quarrel over a land dispute. The deceased are South Sudanese nationals,  and include  a woman.

“Justice must prevail! People are being put under injustice and this is not fair, we have to be given equal opportunities and he must face the law, that is what we are calling for,” said Garang Peter, one of the protestors.

The protestors’ further call for the government to actually serve justice, otherwise things will fall apart across the country.

According to protestors, Lual – marine, Kiir’s nephew has been threatening the livelihood at the Sherikat residential for quiet long.

It was few months ago, President Kiir’s nephew, cleared out a cemetery around Sherikat residential of Juba and built his hotel without any authorization or permission from the state authority.

He, Lual attempted to take a public toilet in Bor Bus Park which belongs to some guys. The dispute parties were in court and court ruled in favor of folks.

Despite the court decision, the claimed army officer Lual extended his fence to include the disputed a plot. In turn, the owner responds in destroying the fence in his present on Tuesday afternoon.

But he reported kept quiet, left and mobilized his military force which led to killing on Wednesday, according to eyewitnesses.

Eyewitnesses say that the group of land owners and Lual later fought each other in which Lual is accused of starting the fighting. He was ‘hit back’ and that when the soldier with him started shooting at random at the civilians.

The killing of unarmed civilians by Lual Marine, president Kiir’s nephew, who is said to be a soldier, has ignited protests there, hundreds of residents flooded the street with some protesters carrying “Kiir Must Go,” Kiir is our corona virus,” Lual Is A killer’, ‘We Don’t Need a Killing Regime in placards, also written ‘justice must prevail’ this time.

Major Gen. Daniel Justin, Police spokesperson explained that the cause of fighting was land dispute between one army officer and local person, which resulted to the killings of five people, four men and one woman.

“We have arrested the suspects – they are six [6], as since the suspects are arrested and the case is opened and now is being investigating, let them be calm and give us the chance, as the law enforcement to finish our work,” Justin told this media.

A statement from the president’s office, signed by Press Secretary Ateny Wek Ateny, said Mr Kiir “is saddened about the shooting and further condemned it.” It added that the incident would be investigated thoroughly.

“The perpetrator has been apprehended by authorities and is under close monitor in hospital, in a critical condition. It is unclear whether he was injured during the incident or after his arrest. The killings of five people are a very serious criminal act the perpetrator [s] must be punished,” said in part of the statement, by president Kiir.

President Kiir’s family has strongly denied Lual Akook’s paternity saying he is not the biological son of the President.

Ateny Wek Ateny says Lual Akook is purported to be “distant relative” from President Kiir’s clan, but he was acting alone.

“The incident would be investigated and public will informed of the outcome through the court of law,” Ateny said in the statement, further warns of politicizing the clear criminal matter.

But many people says Lual is a biological son of the president Kiir despite denial him at the moment.

In Facebook post in 2019, the Office of the President identified Lual as Kiir’s nephew at his wedding.

“We are calling on the South Sudan government to intervene, because killing of unarmed civilians is against humanity – this impunity must end,” said Bol Deng. “We are tired of this gibberish.”

The killings received condemnations from the civil society groups and urged the president to intervene.

The chiefs of the army, military intelligence, police and other government agencies went to the demonstrations scene to cool the situation but were resisted by the protectors. The road was remained blocking and protesting is expected to resume.

“We shall overcome! Our lives matters too – being Dinka is a pre-requisite to mismanage the country – we demand justice,” said Peter Arok, a relative of the one of deceased.

Observers say the dude uses Kiir’s name and state powers to terrorize and kill at will.

“It is high treason chaps!”- How the joy of reading could have put Nelson Mandela and his struggle comrades behind bars. 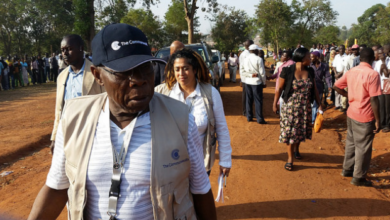