The two US deportees who were speaking to journalist on Saturday 20th June  at their apartment at the Stadium Hostels , West of Freetown , said in August 14th last year, they were wrongfully deported to a country that they weren’t born stating that they have no ties with Sierra Leone as they were from the Caribbean thus been begging the government to help them get out of the country.

Speaking to journalists , one of the deportees , Saren Idaho 55, said he has been in the country wrongfully since August last year when he was deported to the wrong place stating that  he was from  originally the Dominican the common wealth in the Caribbean  and thus said he  had no ties with Sierra Leone.

“They brought us to this country on  , August 14th , 2019 , I came down from the flight and told the people at the airport that I was not from here . If America wants  to send me, they can send me to my country . My wife and children born and bred in  America. They took us in and lock us up for five and half months at the CID. They let us out of there on February 4th of  this year, ‘’he said , adding that they took them to the Ministry of Foreign Affairs  and arranged for them to stay  at the Charm Beach Hotel which he said the government  could not pay their bills.

He added that  with the intervention of the BBC’s Umaru Fofana , he helped settled their  bill  at the hotel, fed them and did his best  during their stay at the hotel and even advised the government to provide  them the hostels at the National Stadium  for them live as it was less costly.

“  I am going to be plain , this is a simple thing why should it take a nation a whole year , to take me out in their country .  Get me out! We are almost by August that I have been in this solitary confinement,’’ he lamented.

He said he was originally , from Dominican the Commonwealth and has been in the United States of America for a very long time adding that he has a family and properties in the States thus saying it was crazy for him to be sent he doesn’t even know in his entire life.

“They tried to send me  to Dominican the Commonwealth on their own , that is government of this country,  but I told them they are going to be able to do it because there is no third-party repatriation nation in the world. The American Embassy know we are here , they told the government of Sierra Leone you took them in , you cannot come back like seven months or six months later to say take this people they are your responsibility. How that works I don’t know ,’’Idaho explained.

Idaho told journalists that the American government knew his identity as they tried to deport him to his home country of the Dominican the Commonwealth which he said his nation of birth refused as they didn’t submit correct paper work to them.

‘’ I am homeless , there is not a place for me . I used to live comfortably in the US , I have my children , I have a wife . I talked to them every day despite time differences no matter . I am begging the government and the  people of this country to do the right thing . Get us out! Don’t let anybody tell you what to do in your  own house . It doesn’t make sense.’’

Prince Artman Latoya on his part said, it  wasn’t his intention to come to  the country alleging that it was the US government and the SL embassy  who connived to bring them in a country that they he didn’t know and ever heard about in his life.

“Now this is how it happened  in 2012, I was interviewed by Mr. Kawa in York county , Pennsylvania and Mr. Kawa told the immigration , this man is not from Sierra Leone . So,  why in 2019 , he turned around , and issue this travel documents for Americans to bring me here which means somebody got paid.  And at the same time , we  had interview  with the foreign affairs ,  with the director ONS , and  CID, Social Welfare , everybody came together . The ONS admitted that he himself flag our names and give it to Washington and said  do not bring these people ,’’he revealed.

He said he is not a Sierra Leonean and thus he didn’t belong in this part of the world adding that even upon arrival he  told the airport authorities that he wasn’t born and bread here but assured them they will sort it out only to be here now almost a year.

‘’ On the side of government, they are not doing anything , they are keeping us here in limbo  you got me , medical attention is zero ,  feeding now is a problem . It’s been over  a month they have not given us  any money to keep ourselves,’’ Latoya added.

Latoya however stressed about the challenges they were facing together his colleague adding that there is  no medical attention thus pleading to the government to help them out back to the United states  where they have families and properties. 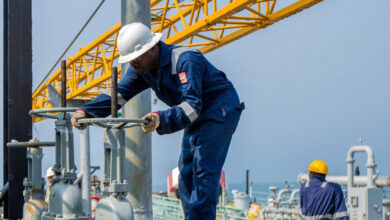 Following Nigeria’s Example: Developing Marginal Fields Is More Important Than Ever for Africa