Father Augustine Berewa, Son of the Late former states man of Sierra Leone, Solomon Ekuma Berewa together with former Minister of Basic and Senior Secondary School (MBSSE) has, turned the sod for the construction of the Solomon Ekuma Berewa Academy at the Mongegba Community, Regent, in Freetown.

Speaking at the turning of the sod Mass and historical block laying, Representative of the Berewa Family, Mrs. Annie Lansana thanked the proprietor for thinking not only when their father died, but when he was alive by honouring him by naming a school after him adding that some people only honour someone after he has passed away.

She said her late father hailed from a humble background from the village of Yengema, Bompe Chiefdom, in Bo District stating that their dad was able to reach the pinnacle of his life through education which she said her dad cherished so much.

“This community as Mr. Sesay has spoken do not take their children to school, maybe they do not understand the value of education and may be they do not know one person in this village, tomorrow will be emerged to be president just as my father turns out to be president from that small village of Yengema,’’ she said.

Madam Annie Lansana admonished community people to take their children to the school urging them not to deprive their kids from attending the school because of the name of the school as his father though an SLPP but was a Sierra Leonean and believe in education.

Madam Lansana went on to say that  the family will support the development of the school as it is an honour for them as a family for a school to be named in honour of their late father.

“That school that was name after him at Charlotte, me and my husband have always gone there to visit the school, and so this one again, we are not going to leave this and by God’s grace we will be part of this community. This place very soon we will call it home . Hon. Solo B believed so much in education , respect elders, bringing up children well , teaching them good values in life,’’ she lamented.

“The late States man believe in education but one thing that I want to mention about him in relation to education that the fact say he was a teacher.  A lot of people know Pa Berewa as a lawyer and politician but very few people knew he was a teacher. So, the fact that they haven’t name a community centre after his name , or a  stadium after his name  but a school. Even before he past away he smiles at this thought and even where he is now he will be proud, ‘’he said.

He said when he saw the blue print of the school , he told Moses that this was a big task adding that this is a laudable venture and believed this is great thing which they will support.

“The Free Quality Education Programme came in to help the children of this nation and our objective is to create access to any children of the country to go to school . we want every child to get access to go to school to get education that has quality. I am really happy to say in one year , that the introduction of FQE , in the country, there was an increase in enrolment of  over 700,000 children which tells you that there were so many children that were not attending school,’’ Amara Sowa explained.

Proprietor of the school, Moses E.N. Sesay said he first came to Mogegba and Mothaim community when he came to buy a land in the community but quickly realised there was not any school in the area thus the community stakeholders met him an explained to him about their school constraints as soon as they realised that he works for the government under the Free Quality Education.

“ Before I got this job , I made a covenant with God that if he blessed him with a job , I will make sure that I will help with half of my salary to the poor and the needy and also support God’s divine work,’’ he said.

He added that he decided to name the school after the erstwhile vice president because he believed that the former statesman is a true father of democracy, stating that he deserves a lot of respect and honour.

“Last year, August 6th on the day of his birthday, he did the turning of the sod of the school.  The first school building, which I constructed, at upper Mogegba but the Minister of Lands Hon Sandy said a school should not be part that community as it is purely residential of which my self-support and I met the head man and stakeholders when they showed me a free government land and today we are here to turned the sod of the school, ‘’ Moses Sesay Lamented.

Alpha Osman Timbo, former Minister of Basic and Senior Secondary School (MBSSE) congratulated Moses Sesay for his brilliant initiative in investing in education stating that it was a great venture.

“Anything that is done in honour of Solomon Berewa and some of us are around, we will be at the forefront to make sure that it is achieved,’’ he said, adding that he was very proud of the former statesman as his commitment to serve humanity is unparalleled.

He called on the community to take the project as theirs, adding that everybody in the Mogegba and Mothaim communities will be the first to benefit from the school. 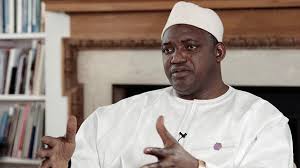