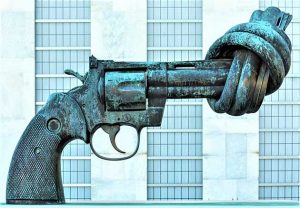 Just as the U.S. is haunted by the 1963 murder of John F. Kennedy, Sweden is troubled by the 1986 murder of its Prime Minister Olof Palme. The American feelings were aired on Bob Dylan´s latest album, Rough and Rowdy Ways, containing a 16 minutes long song with lines like:

It happened so quickly, so quick, by surprise
right there in front of everyone’s eyes.
Greatest magic trick ever under the sun,
perfectly executed, skillfully done.

I said the soul of a nation been torn away
and it’s beginning to go into a slow decay.

On the evening of the 10th of June this year, a significant part of the Swedish population sat eagerly waiting in front of their TV sets. The Palme Commission was going to reveal the definite results of 34 years of official investigations into the murder of Olof Palme.

He had, in a street corner at the very centre of Stockholm, at short range, been shot dead in front of his wife. He was killed with a single bullet in the back. The Prime Minister had in the afternoon told his body guards they could take the evening off, something he often did when he was not on duty. Olof Palme’s evening had been quite typical for a Swede at the time, even for a high level, controversial politician, with an international fame rivalled only by the music group ABBA. Swedes had grown accustomed to a low level of violent crimes. After a regular day at work, Palme arrived home at 18:30. He ate dinner prepared and served by his wife. At 20:42 the couple caught the subway, three stations later they descended just in time to meet their son Mårten and his fiancé and for Palme to buy tickets for the four of them to watch the Swedish film The Brothers Mozart, which I saw a few years later, thinking it was a pity that Palme had to watch such a bad Fellini-wannabe movie just before he died.

After the movie, Palme and his wife were quietly walking back home when a taxi driver at 23:21 from his car witnessed how Palme’s wife fell to the ground slightly wounded by a bullet, while her husband lay bleeding on the ground. The murderer was running from the crime scene. The driver immediately called the switchboard of his taxi rank, which alerted the police. Within a minute a police patrol car had arrived. An ambulance happened to pass by and stopped while a police ran after the murderer, though he lost him.

When all this happened my wife and I were in Santo Domingo, capital of the Dominican Republic. The evening was going to be the highpoint of the carnival season and we were getting ready for the festivities. The TV was on, but we were not paying it much attention. As I was putting on the fangs which completed my vampire outfit, I glanced at the TV screen, glimpsing a portrait of Olof Palme.

”Something must have happened in Sweden – they have just shown a picture of Palme” I said, and turned up the sound only to find that other news were coming in. ”I don´t suppose it was anything serious”, my wife said. During the evening, I could not stop wondering about the picture of Palme and imagined I had heard the word asesinato. We came back to our flat at three in the morning and I called my father.

”What time is it in Sweden?”
”9 o´clock in the morning. Why? Has anything happened?”
”I saw something about Palme on TV, but didn’t hear anything. It was more than 12 hours ago.”
In faraway Hässleholm my father put the radio on. With a sense of shock I heard him say:
”They’re playing some sort of funeral music. Wait a moment … Olof Palme has been murdered! He is dead. He was shot in a street in Stockholm.”

I was still dressed up as vampire. Everything was absurd. I put on the TV and saw people weeping in the street outside Café Opera, Stockholm’s fanciest restaurant. What had happened?

After I had come back to my teaching job in Sweden five subjects had been set up for that year’s final exams, one of them being ”What Olof Palme and his death mean for me”. Every Swedish teacher at the school had to comment on his/her colleagues´essays and thus I came to read more than 150 student essays. To my suprise I found that every single pupil had chosen to write about Palme’s death. Most surprising was that the thoughts expressed in all essays were more or less the same: ”Sweden is now like every other country in the world. We have lost our innocence. We are not unique any more. Politicians are murdered even here. Swedish society and politics are just as corrupt as in the rest of the world. Palme’s death was the end of our secure welfare state. We live in a changed country.” It was like waking up in an unfamiliar landscape after a good night´s sleep. A vacuum had arisen in the Swedish self-awareness.

A Dutch friend of mine told me: ”When the President of a neat little democracy like Sweden is murdered you will soon witness how all kind of maggots will be creeping out of the corpse.” He was right. During the search for the killer different ”tracks” constantly opened up, each indicating an ”affair”, pointing to strange covert actions, all of them ultimately leading to a dead end.

After the assassination, Hans Holmér, Chief Constable of the Stockholm County Police, took charge of the investigations. He assumed the murder was of a political nature, but not related to the domestic political scene. Under his command, suspicions almost exclusively centred on his personal convictions. Crime scene investigations and witness interviews were fatally flawed. Resources were directed towards investigating radical immigrant groups, notably the Kurdish Liberation Movement PKK. After a raid when numerous Kurdish immigrants with presumed PKK connections were arrested, only to be released due to lack of evidence, Holmér had to resign.

Holmér shared a flat with Ebbe Carlsson, a publisher close to the inner circles of the governing Social Democratic Party. After Holmér had been removed from the Palme investigation, Carlsson was caught smuggling surveillance equipment into Sweden on behalf of Holmér. It turned out that Carlsson had acted with the consent of the Minister of Justice, who was forced to resign and the scandal thickened. Holmér had recruited infamously violent police officers with right-wing leanings, who furthermore had been suspiciously involved with narcotics- and arms dealers in Stockholm’s underworld, some of them had just before Palme’s death been spotted with walkie-talkies close to the murder scene. The Swedish secret police, SÄPO, had been marginalized from the investigations. Accordingly, several international affairs and connections with foreign Secret Service Agencies had not been fully investigated.

Among them was the so-called Bofors Scandal. The Swedish arms manufacturer Bofors had paid USD 9 Million in kickbacks to top Indian politicians. Furthermore, the company had apparently illegally exported sophisticated weaponry to Iran, Nigeria, and the United Arab Emirates. A year after Palme’s death, a State appointed Weapons Inspector ”fell” bakwards in front of a subway train and killed a few hours after a meeting with the head of the Nobel Industries, one of the co-owners of Bofors. Some illegal weapon deals had allegedly been brokered with the help of the East German secret police, STASI. Two Swedish journalists who had followed this trail had, two years before the inspector’s death, been found drowned in a car just outside Stockholm. None of these deaths was explained, even if the Foreign Minister just over a year after Palme’s death declared that: ”The dirty linen of the arms deals will be washed in the open.”

Speculations spread like wildfire after it was alleged that Bofors had been involved in arms sales to Iran during the infamous Iran-Contra Scandal. A former CIA agent, Dois Gene ”Chip” Tatum, who 1986 – 1992 had been active in several of CIA’s covert actions, was in an interview asked if he knew anything about the murder of Olof Palme. He answered: ”I was informed that the OSG [Operations Sub-Group] was behind and used the ”assets” [professional killers] in South Africa.” According to Tatum the reason for the murder was that agents in charge of the Iran-Contra deal had approached Olof Palme and become alarmed when learning that the Swedish Prime Minister was unaware of Bofors’s illegal activities and declared that he was going to take up the issue within the UN.

The Swedish Social Democrat Government was a known supporter of anti-Apartheid forces and by the end of September 1996 Eugene de Kock, a former South African police officer, gave evidence to the Supreme Court in Pretoria stating that Palme had been killed as part of an operation headed by a Secret Service agent, Craig Williamson, who had been in contact with Swedish mercenaries who had served under the South African Apartheid Regime.

None of the above cases have been validated by the Swedish authorities and represent just a few of several ”affairs” that surfaced in connection with Palme’s death. My Dutch friend’s prophecy proved to be correct – an unresolved, political murder would reveal what goes on under the surface of an affluent and ”just” society. My pupils were also right – with the murder of Olof Palme Sweden lost its innocence and its citizens have not recuperated from the shock. After approximately 600 million SEK spent on investigations, a reward of 5 million USD to anyone who can present convincing evidence of whom the killer was, and 130 confessed killers, the Palme murder continues to gnaw on the mind of many Swedes.

What did the Palme Commission reveal on TV? It had been been globally announced that definite facts about the murder were going to be exposed and explained. However, 34 years after Palme’s murder the Commission came up with yet another alleged killer, a loner like so many other earlier suspects. The Commission declared that the alibi of a certain Stig Engström had not been throuroughly investigated and that he was the probable killer. Twenty years after his death, Sweden now got its own Lee Harvey Oswald, though he had not even been arrested during his lifetime, even less officially accused of any crime. The Commission proclaimed the case closed. Not many were content with that conclusion.

The post ”Murder Most Foul” – the Death of Olof Palme appeared first on Inter Press Service.