President Adama Barrow has told his colleague Heads of State and Government that The Gambia remains committed to achieving the goals of the ECOWAS single currency, the ECO.

He gave this assurance at a virtual meeting organised for Member States of the West African Monetary Zone (WAMZ) this morning on 23 June, 2020.

The Gambian leader said while the ECOWAS Authority has made progress on the proposed introduction of the ECOWAS Single Currency by the year 2020. The Francophone countries in ECOWAS, through its West African Economic and Monetary Union (UMOEA also recently announced a similar programme with opposing exchange rate monetary policies within the same region.

“There is need, therefore, to review these decisions in line with Article 15 of the 48th Ordinary session of the Authority of the Heads of States and Governments of 16th December 2015,” President Barrow told the meeting, attended by Presidents of Sierra Leone, Liberia, Guinea, Ghana and Nigeria.

Decisions have been made already on the name and symbol of the future currency; the exchange rate regime, the monetary policy framework, the model Central Bank, and the name of the common Central Bank.

The Gambian President urged that the Authority of Heads of State and Government of the Zone should provide guidance on this crucial issue, calling for a review of the parallel monetary programmes in the West Africa sub region.

“I will emphasise here that The Gambia remains committed to the revised roadmap of the ECOWAS Monetary Cooperation Programme. This commitment has been translated into sustained improvements on achieving the set of macroeconomic convergence criteria,” he said.

Meanwhile, the meeting Chaired by the Chairman of the ECOWAS Authority of Heads of State and Government, H.E Julius Maada Bio of Sierra Leone concluded with two propositions:

1.Convene an emergency Summit of Heads of State to discuss a way forward for the two monetary unions’ decision on the ECO

2. Call on UMEOA community not to go ahead with the launch of the ECO pending the proposed meeting of Heads of State of the ECOWAS. 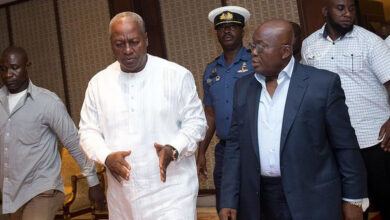 Coronavirus: Ghanaians will not pay water bills for three months

Zimbabwe: I’m On My Way Out – Mugabe