Alice Bah Kuhnke and Dr Pierrette Herzberger-Fofana, both members of the European Parliament, in this opinion piece, note that Europe has seen an increase in right-wing extremism and a shift to the political right in the last decade. This, they argue, has led to an increase in both racially and religiously motivated attacks against minority communities. They called for concrete political action to combat the systemic racism that is prevalent in European societies.

The murders of George Floyd and Breonna Taylor have highlighted the prevalence of racism, inequality and instability within our societies.

The subsequent uprisings have underlined the need for real political change. All over the world, people are gathering in their thousands to protest against racism and to show solidarity with the Black Lives Matter movement.

The time for change is now. The momentum has long been building. We need concrete political action to combat the systemic racism that is prevalent in our societies.

Racism is something we have both personally experienced in our lives.

The European Union is not an exception to the problem. We have both been stopped on several occasions by security personnel in the European Parliament asking us what business we had on the premises. None of our White colleagues have reported such experiences.

Europe is home to more than 15 million people of African descent. Attacks driven by racism against people of colour are common.

Only 15 out of 27 EU member states have dedicated action plans and strategies to combat racism and ethnic discrimination and the European Union still lacks a framework for a strategy to combat all forms of racism.

During the last decade we have seen an increase in right-wing extremism and a shift to the political right. It is no coincidence that there has also been an increase in both racially and religiously motivated attacks against racialised communities.

For people of African descent, discrimination is multi-faceted especially when gender, sexual orientation and nationality, are taken in to consideration.

It is our duty as policy makers to acknowledge this complexity and to ensure that any legislation is drafted from an inter-sectional perspective.

Together, we must stand against all kinds of discrimination both offline and online. That change must also take place at European level in the form of strong legislation.

The lack of ethnic diversity in the EU institutions is shameful. We are supposed to reflect the people we represent – not only in the European Parliament, but across the institutions – and we have failed.

Only three percent of MEPs are people of colour; there is not a single commissioner of colour and there never has been.

These figures are a result of both institutionalised racism and discrimination. The diversity and inclusion strategy of the European Commission needs to be updated to include consideration of racial/ethnic origin and it must be implemented across all of our institutions.

The EU still lacks legislation on discrimination outside of the workplace.

The Directive on Equal Treatment, drafted to address this issue, has been blocked in the council since 2008.

This deadlock must be broken. We as Greens have taken the lead to push for action from the parliament in this regard.

Alice Bah Kuhnke [one of the co-authors of this piece] will meet shortly with the German presidency to discuss strategies the way forward. It is imperative that anti-discrimination legislation is adopted do that we can adequately address all forms of discrimination in the EU.

Bah Kuhnke has initiated a parliamentary debate with resolution to address the ongoing situation in the US. The European Union must show solidarity with the American people in a loud and critical protest against the misuse of power from the President, police brutality, attacks against journalists and the structural, systematic racism against the African-American people.

Moreover, the commission must also address the racial discrimination and police brutality within the EU.

As Black members of the European Parliament we led an initiative together with MEP Monica Semedo resulting in a letter signed by 121 of our colleagues, from four different political groups, calling on the commission to acknowledge and condemn systemic racism and police brutality in the European Union.

We also call on the commission to request studies from the Fundamental Rights Agency and Europol to investigate police brutality in the member states.

The collection of data in such studies must be dis-aggregated by racial and/or ethnic origin (as defined by the EU race directive) so that we can understand the true scope of the problem and develop relevant ways of addressing it.

We must make use of this moment to push for change. The leaders of our countries, all White, and predominantly male, must use their positions and their privilege to put the struggle against systemic racism and the resulting socioeconomic inequality at the top of the political agenda.

Equally, if president Ursula von der Leyen is serious about having a Europe that “leaves no one behind” we need concrete European legislation to address these issues, especially in the wake of the Covid-19 crisis that has reinforced existing inequalities.

The time for change is now. Protesters need to know that the politicians are listening to the millions of people all over Europe calling for political action.

As Martin Luther King said, “a riot is the language of the unheard”. It is time that we listen.

Note: Members of Parliament (MEP) are – Alice Bah Kuhnke is a Swedish MEP and vice-president Greens/EFA group. Dr Pierrette Herzberger-Fofana is a German Green MEP and co-president of the Anti-Racism and Diversity Intergroup.

What you need to know about the coronavirus right now 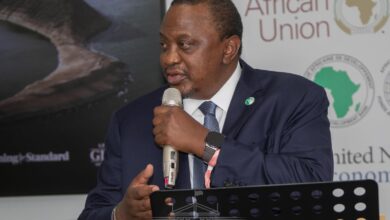