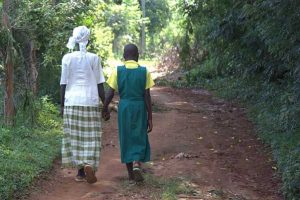 A mother and daughter in Kenya. The daughter was a victim of sexual violence. Credit: Tara Carey, Equality Now

In Malawi, Mary* was only 14 years old when she was recruited and trafficked to the city of Blantyre and sold for sex in a bar. A man had arrived in her village looking for girls to work as domestic helpers for families.

He appeared genuine and for Mary – and many girls who are out of school and living in poverty – this seemed a way out and a chance to earn money to support her family. She was living with her grandmother, who had hardly enough to buy food.

When Mary arrived in Blantyre, the promised work never materialized. Instead, the man sold her to a bar owner who in turn sold her for sex to his customers. Isolated and traumatized, Mary was trapped for over three months, and only escaped when the bar owner went away one night.

Although it has now been over two years since his arrest, the case is still pending in court. With no fixed time limit, the legal process has dragged on, leaving Mary waiting indefinitely and stuck in limbo. Meanwhile, the man who recruited her from the village has never been arrested.

Mary would have abandoned her fight for justice long ago had it not been for the support of Equality Now and our partner People Serving Girls at Risk, who have been providing psycho-social assistance to help Mary rebuild her life and navigate the difficult legal process.

This includes covering her transport costs and accompanying her to numerous court hearings that to date have resulted in only postponements, disappointment, and upset.

Worryingly, the many legal obstacles faced by Mary are neither uncommon in sex trafficking cases, nor are they unique to Malawi. Across Africa, traffickers who recruit, abuse, and sexually exploit vulnerable and impoverished women and children are going unpunished because governments and criminal justice systems are failing in their duty to hold perpetrators to account.

Take for instance, the horrific case of German national Bernhard Glaser, who was arrested in Ugandan in February 2019 and charged with multiple counts of sex trafficking and abusing girls aged 10 to 16 who were living at an unlicensed shelter Glaser had established ostensibly to “help” vulnerable children.

The story made international headlines and caused huge public uproar amongst Ugandans who were appalled at how this predator had betrayed the community’s trust and abused his position of power to sexually exploit many girls over a long period of time.

Despite widespread public outrage, more than a year after Glaser’s arrest, the case was still pending, delayed by multiple adjournments, with Glaser yet to even enter his plea. He died from cancer in April 2020, a day after being granted bail.

The girls never got their day in court. Nor has the Ugandan state addressed the issues making them vulnerable to exploitation or provided assistance to help them overcome their ordeal, instead leaving them at risk of further abuse.

Meanwhile, 61-year-old American Christian missionary Gregory Dow has pleaded guilty in a US court to sexually abusing girls in Kenya. Back in 1996, he was convicted in America for assault with intent to commit sexual abuse against a teenager and was sentenced to two years’ probation and ordered to register as a sex offender.

He later travelled to Kenya and in 2008 established a home for orphaned children where he violated girls in his care.

In 2017, Dow fled back to the United States after Kenyan authorities attempted to arrest him. He was eventually taken into custody after being located by FBI agents and US police.

A statement by the US Department of Justice said: “The defendant purported to be a Christian missionary who cared for these children and asked them to call him “Dad.” But instead of being a father figure, he preyed on their youth and vulnerability.”

Sexual exploitation is both a cause and a consequence of discrimination and the unequal status of women and girls. Adolescent girls are in an especially disadvantaged position, which is underpinned by multiple layers of discrimination directed at them for being young, female, and sexualized by society.

These structural inequalities exist across Africa, as they do in all the regions of the world. High levels of poverty alongside harmful cultural practices make girls particularly susceptible to sexual predators and traffickers, who take advantage of shortcomings in social safety nets, local child protection systems, law enforcement, and judicial processes.

The current pandemic exposes and exacerbates deep-rooted structural inequalities that run along the cultural fault lines of gender, sexuality, race, disability, and class. In the wake of COVID-19, an economic crisis is placing further burdens on underprivileged communities, with many suffering severe financial hardship.

The United Nations has warned human traffickers are becoming increasingly active, targeting impoverished women and children who have lost their income as a consequence of lockdown and social distancing measures introduced to limit the spread of coronavirus.

Meanwhile, school closures have interrupted the education of over 1.5 billion students worldwide, and protection systems have been severely disrupted. Predators are seeking to take advantage of youngsters spending more time unsupervised on the internet.

Across Africa, the expansion of inexpensive, high-speed internet and the growth in smartphone, tablet, and laptop ownership is swelling the number of children who can be targeted in the digital realm. Girls are particularly vulnerable to online grooming, sexual coercion, and sextortion, accounting for 90% of those featured in online child abuse materials.

Coupled with this is a disturbing global surge in demand for child abuse content. The worldwide impact of COVID-19 means people have been spending more time online, fuelling what was already a vast and rapidly expanding form of cybercrime intersecting national boundaries.

Exponential growth in the volume of digital content is making the cybersphere harder to police, and emboldened distributors of child sexual exploitation material are targeting mainstream platforms to reach wider audiences.

It is commendable that numerous African governments, including those in Kenya, Malawi, and Uganda, have enacted anti-trafficking and child protection laws that can be used to safeguard children and punish offenders. It is an important step. However, implementation is often very weak. Sex trafficking and sexual exploitation cases are not prioritized.

In many African countries, courts have closed, reduced, or adjusted their operations, making the situation even worse for girls seeking justice. Mounting backlogs of legal cases will further prolong judicial and administrative proceedings.

Without functioning judicial oversight, girls’ access to justice and protection from sexual exploitation will be undermined to an even greater extent.

It is more urgent than ever that the justice system responds to the realities of children whose rights have been violated. States must put in place measures to ensure that girls have access to protection and justice in meaningful ways during and after the pandemic.

Governments need to do more to ensure survivors of sexual exploitation are protected and supported in their recovery. When victims and their families cannot trust the courts to deliver justice, it undermines the power of the law and emboldens offenders to continue exploiting and abusing with impunity. 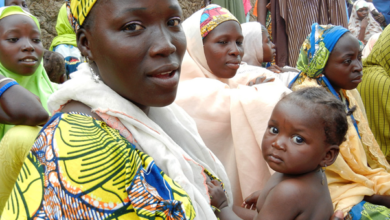 Mozambique:Hundreds of women and girls abducted in Cabo Delgado

Cameroon: Thousands at risk as Doctors Without Borders Withdraws from the North West .