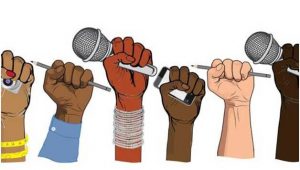 This year’s World Press Freedom Day on 3 May falls during COVID-19 lockdowns in many of our countries. Restriction on movement means journalists all over the world are facing obstacles in getting interviews and data, and verifying stories before publishing.

In addition, the global pandemic has been used by many governments to control not just the people’s movement but also their right to information. Journalists have been intimidated or attacked, and photojournalists and videographers on the frontlines often risk getting infected while documenting stories.

Two recent webinars conducted by Global Investigative Journalism Network (GIJN) and Finance Uncovered (FU) showed that recent government moves to restrict the press in Nepal are not unique – they are happening in many countries around the world.

The global pandemic has been used by many governments to control not just the people’s movement but also their right to information. Journalists have been intimidated or attacked, and photojournalists and videographers on the frontlines often risk getting infected while documenting stories

There have been efforts by authorities to criminalise journalism, and this is putting journalists reporting on the pandemic at risk, noted Courtney Radsch of the Center to Protect Journalists at the GIJN webinar. In Nepal, too, there have been attempts by various government agencies to censor information.

Last month, the portal Kathmandu Press posted a story about alleged corruption during the purchase of medical equipment involving people in high places. This story was deleted from the site by a software company maintaining the portal’s homepage which had links to individuals in the Prime Minister’s Office involved in the deal.

On 27 April, Radio Nepal aired a live interview of former prime minister Baburam Bhattarai that was sharply critical of Prime Minister K P Oli. The government asked the head of the state-owned radio station and its news editor for an explanation, and got the interview deleted from Radio Nepal’s site.

On 18 April, Press Council Nepal (PCN) sent a letter to Nepal Telecommunication Authority to shut down certain web-based portals and ban them from publishing false news. In all these recent cases, the government appears to be using the cover of the COVID-19 crisis and the excuse of protecting privacy and shielding the public from fake news and character assassination to crackdown on the free press.

“Many supposedly democratic countries like the United States, India and Nepal are censoring the press and making it very difficult for press freedom to prevail while covering COVID 19,” said Kosmos Biswokarma editor of Kathmandu Press. Tampering with the website without permission raised grave questions of freedom of press in this country, he added.

The mission of journalism is to use the citizens’ right to freedom of expression to keep them informed. Journalists go to great lengths, and put themselves at considerable risk, to gather and investigate factual information to alert the public and authorities about wrong-doing and malpractice.

However, citizens today get their information not just from the mass media but also from the Internet. The dissemination of fake news, rumours, defamation, violation of privacy on social media is not journalism. Governments should make that distinction.

The authorities should not mistake misinformation for journalism, and not use objectionable social media content for blanket suppression of journalistic information. There has to be a mechanism to track such content and take action against perpetrators. It is the Press Council Nepal’s job to trace these sources, and not issue directives to ban portals. In fact it is not the PCN’s job to close down the media at all.

During emergencies like the COVID-19 pandemic, due diligence rules are relaxed and there is a lack of transparency in big deals. Because it is the journalist’s job to speak truth to power, this often gets them into trouble, as happened in Nepal with the coverage of the Omni Business Corporate International in the direct purchase of test kits and medical equipment from China at inflated cost.

Shiva Gaunle of the Centre for Investigative Journalism Nepal (CIJ-N) says the biggest problem journalists are facing during the present crisis is getting data and verifying them. “It is not just the lockdown and restrictions on mobility, news items are taken off home pages or shut down, how can Nepal claim to have right to information and rule of law?” he asks.

Journalism is not a crime, and fake news is not journalism. Governments should be able to separate the two, especially during emergencies like this global pandemic.

The post Journalism is Not a Crime…and Fake News on Social Media is Not Journalism appeared first on Inter Press Service.