The directive was issued on Monday, May 18, after FKF-Amrouche dispute was re-submitted to Fifa’s Disciplinary Committee for evaluation after defaulted on payment.

The World governing body on February 28, 2020 wrote to Nick Mwendwa-led federation directed them to pay Amrouche by March 3 but the federation wrote back requesting for more time. The Zurich body gave FKF up to March 9 to settle the matter; however, they did not act.

Two weeks later, FIFA wrote again to FKF warning them of dire consequences including expulsion from Fifa completions if they fail to pay the Botswana coach in a period of 30 days.  Nonetheless, the federation still failed to honour the order forcing the body re-submit the matter to the Disciplinary Committee.

In a letter dated April 24 addressed to FKF CEO Barry Otieno, the body set May 18, as the day the African country would know its fate concerning the case. Fortunately, Kenya survived Fifa’s sanctions after being given another 30 days to settle the matter.

“In this regard, we take due note from the content of the above-mentioned correspondence that the Football Kenya Federation allegedly did not pay the amounts due to the coach Adel Amrouche within the granted deadline and that the latter therefore requests that further disciplinary sanctions be imposed on the Football Kenya Federation,” read a letter.

“In this sense, we kindly inform the parties that, in accordance with point 4. of the decision passed by the Chairman of the Fifa Disciplinary Committee on 23 March 2020, the case will be resubmitted to a member of the Fifa Disciplinary Committee on 18 May 2020 for evaluation in order to decide on harsher sanctions to be imposed on the Football Kenya Federation, which may lead, among others, to possible expulsion from Fifa competitions,” the letter added.

FKF boss Nick Mwendwa had sought government’s intervention but the Sports Minister Amina Mohamed revealed the government will not pay for what she termed as mistakes by the federation.

Amrouche had narrated his suffering tale after Kenya sacked his after Harambee Stars was bundled out of 2015 AFCON qualifiers.

“I have been waiting since 2014 and for me one month or more (moratorium) is the same. But its a question of principle, because FKF deserted me when Caf banned me for something I never did. I was thrown out of my apartment with no car, no money and I was struggling alone to pay a lawyer for two years while I was jobless. I spent all my money and family money, but I never said anything bad about Kenya. I was innocent and my only mistake was to be coach of Kenya,” lamented Amrouche. 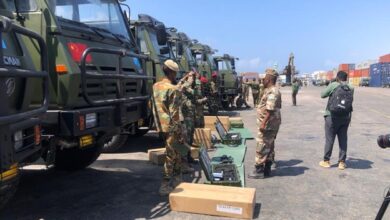