The Crises of 2020 Will Delay the Transition to Clean Energy 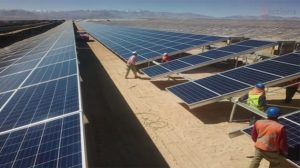 Employees work on the solar panels of the El Romero plant, with a capacity of 196 megawatts, in the desert region of Atacama in northern Chile, a country that has set out to develop its solar power potential. CREDIT: Acciona

The oil slump, global recession and uncertainty about the magnitude of the COVID-19 pandemic will fuel the appetite for cheaper fossil fuel energy and delay investments in renewables, affecting the targets of the Paris Agreement on climate change and the Sustainable Development Goals (SDGs).

The countries of the developing South, and in particular oil exporters, will be affected as suppliers to shrinking economies and as seekers of investment in clean energy, in a world that will compete fiercely for low-cost recovery, warned experts consulted by IPS.

The crises, “in view of the abundance and low prices of oil, far from accelerating a change of era that would leave behind fossil fuels and embrace renewable energies, will postpone for a long time that aim, outlined in the SDGs,” said Venezuelan oil expert Elie Habalián.

One of the targets of SDG 7, which calls for affordable clean energy, is to “increase substantially the share of renewable energy in the global energy mix” by 2030.

This is in line with the Paris Agreement on climate change, signed in 2015, which enters into force at the end of this year. The accord includes energy transition measures: national contributions to replace fossil fuels with clean energy, reduce greenhouse gas emissions and curb the increase in temperature to 1.5 degrees Celsius.

These commitments are undermined by the impact of the COVID-19 pandemic, which will cause a severe recession, with the global economy projected to shrink three percent this year and six percent in large countries in the North like the United States and in the South like Brazil.

With that forecast, “it seems that the efforts of governments will tend to sustain and deepen the extractivist model, including hydrocarbons,” said researcher María Marta di Paola, of Argentina’s Environment and Natural Resources Foundation.

In 2018, according to British oil giant BP, global consumption of primary energy (the energy embodied in natural resources before undergoing any human-made conversions or transformations) was 13,865 million tons of oil equivalent (Mtoe), with a predominance of fossil fuels: oil 33.6 percent, coal 27.2 percent and gas 23.8 percent.

The Paris Agreement, aimed at adapting to and mitigating the climate emergency, establishes that developing countries will take longer to comply with the agreement and that the reductions to which they commit will be made on the basis of equity and in the context of their fight against poverty and for sustainable development.

But in the face of the crises caused by the pandemic, many of the 196 signatory countries, “seeking to take advantage of their installed capacity and regulate impacts on employment and consumption, will relax environmental standards and miss the opportunity to begin a clean, fair and inclusive energy transition,” said Di Paola.

Lisa Viscidi of the Washington-based think tank Inter-American Dialogue said that “although rates of return are currently higher for renewables than for fossil fuels, there are indications that it will be difficult to attract investment in solar or wind energy before demand recovers.”

View of a gas plant in Abu Dhabi, United Arab Emirates, a major oil exporter. The outlook of abundant oil and lower prices in the midst of the crisis points to intense demand for and use of fossil fuels in the short and even medium term. CREDIT: ADNOC

She cited “the plunge in demand for electricity due to the self-isolation (to curb the spread of COVID-19), which strongly impacts the auctions of renewables, leading to their cancellation” – a reference to the mechanism for buying and selling electricity between suppliers and distributors.

With the collapse of oil prices, governments like those of Latin America “will not be inclined towards renewable energy for now, calculating that it could have higher costs,” said Viscidi, head of the energy area in her organisation.

But also when the current world health crisis ends, “the post-pandemic economy will pose insurmountable obstacles for many countries in the global South to achieve a transformation of their energy mix,” said Alejandro López-González, an expert in sustainability from the Polytechnic University of Catalonia in Spain.

This, he argued, is because “the transformation of the energy mix in countries of the South depends on trade in commodities with industrialised countries,” that is, on securing good markets and prices for their products, which provide revenue with which to adopt cleaner energy sources.

Throughout the developing South, the global recession will result in fewer exports, business closures, job losses, lower tax revenues and reduced investment, according to projections by multilateral bodies, leaving capital- and technology-intensive initiatives, such as solar or wind farms, without resources.

Currently, in the developing South, only India, with solar and wind energy plants, and Brazil (wind and biomass) are attempting to keep up with the giants that possess large non-conventional clean energy installations: China, the United States, Germany and Japan.

Peter Fox-Penner, head of Boston University’s Institute for Sustainable Energy, said in an article distributed by The Conversation that “Economy-driven demand reductions, which are likely worldwide, will hurt new renewable installations.

“Utilities will tighten their budgets and defer building new plants. Companies that make solar cells, wind turbines, and other green energy technologies will shelve their growth plans and adopt austerity measures,” in the context of the global recession, he wrote.

But “Countervailing factors will partly offset this decline, at least in wealthy countries,” Fox-Penner said. “Many renewable plants are being installed for reasons other than demand growth, such as clean power targets in state laws and regulations,” and public pressure that forces utilities to close down coal-fired power plants, he added.

The outlook for oil

Along these lines, Venezuelan economist José Manuel Puente predicted that “the energy transition will happen, there are more and more regulations, electric and hybrid cars, and the problem for Venezuela, Nigeria or Mexico is that we will remain poor countries with deposits of black sludge underground.”

López-González is also in favour of countries like Venezuela – with an enormous potential for wind energy due to the strong, constant trade winds that blow in the northwest – fully exploiting their hydrocarbon resources in order to finance changes in their energy mix.

But these strategies were suspended for members of the Organisation of Petroleum Exporting Countries (OPEC), and for other crude oil producers, when oil prices collapsed to the point that on Apr. 20 they reached negative values, for the first time in history.

U.S. benchmark West Texas Intermediate was quoted that day on the New York futures market at -37 dollars per barrel, 50 dollars below its opening price that day of 13 dollars.

The prices plunged because, as stockpiles overwhelmed storage facilities, buyers did not want to be forced to receive agreed shipments for delivery on that “Black Monday”, and preferred to assume the cost of getting out of the commitment.

That day illustrated the decline in demand that had already started before the arrival of coronavirus in Europe and the Americas, and which gave rise in March to a supply reduction agreement between the 11 OPEC partners and 10 other exporters.

The recession triggered by COVID-19 will mean that the world will consume 30 percent less this year: 70 million barrels a day of oil, down from 100 million in 2019.

This oil crisis “brings very bad news for producers in the Gulf, Russia, Mexico, Venezuela and others: it is the end of absolute income, and the extreme minimisation of the differential income of oil,” said Habalián, a former Venezuelan ambassador to OPEC.

For years, oil exporting nations benefited from setting reference prices for oil before it reached the markets. And in addition, due to the wide gap between costs and prices, they piled up profits that are being pulverised by the current crisis.

Also affected are dozens of companies facing bankruptcy since the growing demand and strong oil prices had allowed them to extract, mainly in the United States, shale oil and gas by means of fracking (hydraulic fracturing), an environmentally questionable technique.

Finally, the energy landscape will be impacted by the behaviors that consumers adopt in the wake of the pandemic – such as their use of energy or demand for travel – or by changes in labour relations after the extensive experiment in off-site work as a result of the COVID-19 self-isolation.

The post The Crises of 2020 Will Delay the Transition to Clean Energy appeared first on Inter Press Service.