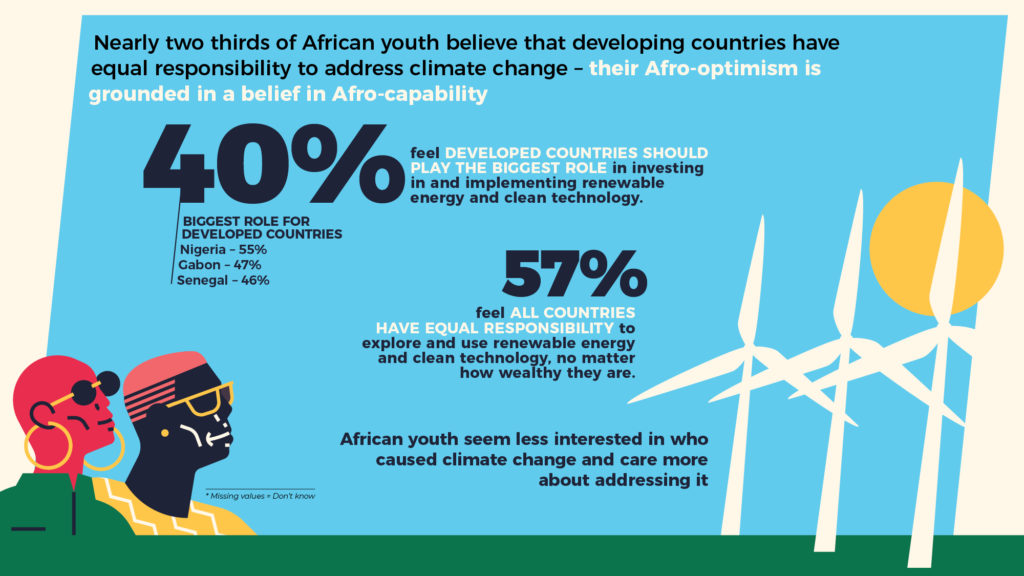 Johannesburg, South Africa. 22 April 2020. Overwhelming majorities of young Africans voiced serious concerns about environmental damages to their countries and continent in a sweeping survey that canvassed 4,200 18 to 24 year olds across 14 African nations, entitled, the ‘African Youth Survey 2020’. As the continent that is arguably the most vulnerable to the effects of climate change and least responsible for its causes, its youth remain anxious about a host of threats to their environment:

The findings of the multinational Survey, commissioned by the Ichikowitz Foundation and conducted by PSB Research, are meant to help develop foundations for a better global understanding of an African youth demographic all too often misunderstood.

Across the sample, 57% report that all countries have an equal responsibility to address climate change through renewable energy and clean technology, while 40% believe that most responsibility lies with the developed world. The following countries, in particular, supported the latter statement: Nigeria (55%), Gabon (47%), Senegal (46%) and Congo-Brazzaville (45%). Ultimately, African youth seem less interested in who caused climate change and care more about addressing it, suggesting an emerging sense of Afro-Responsibility.

However, climate change and environmental degradation are not yet major concerns for African youth when viewed in the context of what they believe to be the most pressing issues. Only 2% of the youth interviewed believe that climate change is the most pressing issue in their country today, pointing instead to unemployment (26%), corruption (14%), political instability (9%) and the rising cost of living (9%) as primary concerns.

Ivor Ichikowitz, African industrialist, philanthropist and Chairman of the Ichikowitz Family Foundation said: “It is clear that Africa’s youth are severely impacted by the causes of climate change. In one of the most insightful findings, the African Youth Survey found that a majority of African youth are less interested in who caused climate change and care more about the action needed to tackle it. Most youths hold their own countries and governments responsible, rather than expecting Western nations to address the causes of climate change.  Despite the real environmental threats Africa faces, a sense of Afro-Capability was strong throughout this survey and seen in the willingness and desire of young Africans to confront these problems head-on, whether by calling for the implementation of renewable energies, or demanding action on better recycling programs or wanting to pursue careers in sustainability. It is this spirit which lends hope to solutions being found, but much more has to be done to empower Africa’s youth to lead the charge on climate action.”

While Africa is home to nearly 20% of the World’s population, the continent has only contributed 4% of its carbon emissions. An in-depth report by the Brookings Institute nonetheless suggests that GDP exposure in African nations vulnerable to extreme climate patterns was projected to grow from $895 billion in 2018 to roughly $1.4 trillion in 2023—nearly half of the continent’s GDP.

Ichikowitz added: “We have witnessed the power of Greta Thunberg as a young, inspirational eco-warrior. Our survey indicates that Africa has many of its own armies of Greta Thunbergs, ready to take up the baton in the fight for the preservation of our precious continent and planet. African leadership, public and private sectors, must rethink their approach to engaging African youth in transformational climate action.”

The Ichikowitz Family Foundation is founded upon the belief that Africa’s potential can be unlocked through education, the respect for human rights, a better understanding of Africa’s dynamic history and the conservation of its rich biodiversity. In terms of environmental programmes, the Ichikowitz Family Foundation works to promote personal, communal, and corporate best practices in matters affecting the environment, including the sustainable utilisation of natural resources and conservation of Africa’s unique biodiversity, especially building capacity and support for anti-poaching operations.