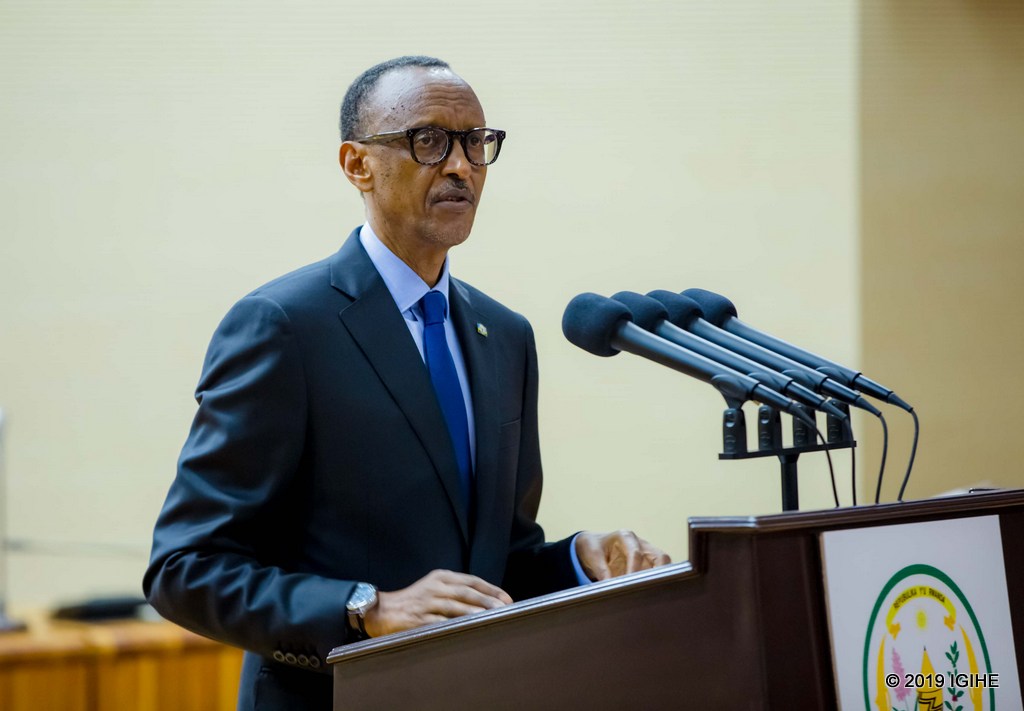 President Paul Kagame is warning those who want to wage a war on Rwanda and everyone who is involved, that the cost on their part will be very high.

He made the comments on   Thursday, 14 November after officiating the swearing in ceremony of new cabinet members.

Among new cabinet members includes General Patrick Nyamvumba who was tasked to lead Internal security ministry. This ministry had been scrapped three years ago.

President Kagame said that  people who are planning to destabilize Rwanda, hiding behind politics are going to face consequences.

Though he did not name them, Kagame could have been saying those who are plotting against his government from inside in cooperation with negative forces from outside.

“I want to warn some people among us who hide behind different things, they hide behind politics, democracy , freedom … that we actually want , it is our responsibility to ensure that there is democracy, there is peace, freedom and everything in our country. For people who hide behind this nonsense and they even backed and praised by people outside ..you are going to face us” he said

In his speech that was being aired live on national television, Kagame said that he cannot accept people who consume security that have cost even people’s lives, to cause problems in the country.

“For those who are involved they better come clean very fast. You cannot be here benefiting from security, peace that we have created, we have paid for in blood, over many years and the you  do things behind our backs to cause us problems. We will put you where you belong… and those ones who make noises about it we will see what they will do.”

Recently Rwanda has been experiencing attacks from rebel groups who say they want to liberate country. Some of them operates from Eastern Democratic Republic of Congo.

In early October, assailants launched an attack in Northern Rwanda where they killed 14 people and wounded dozens.

Those who were captured told local media that they are from RUD Urunana rebel group, a faction group that detached itself from  FDLR, a rebel group in DRC that Rwanda accuses to be made of many who involved in 1994 genocide against the Tutsis.

Kagame warns whoever collaborate with those groups, saying it will cost them highly.

“We are going to raise the costs on the part of anybody who wants to destabilize our security. The cost is going to be very high whether it is the means, we are going to put into that to make sure that we have everything it takes  to ensure security and stability of our country and our people and our development. The source of the cost mainly those people who destabilize our country who want ..it going to be a very high cost on their part absolutely. I mean it and you know that I mean it”, he added.