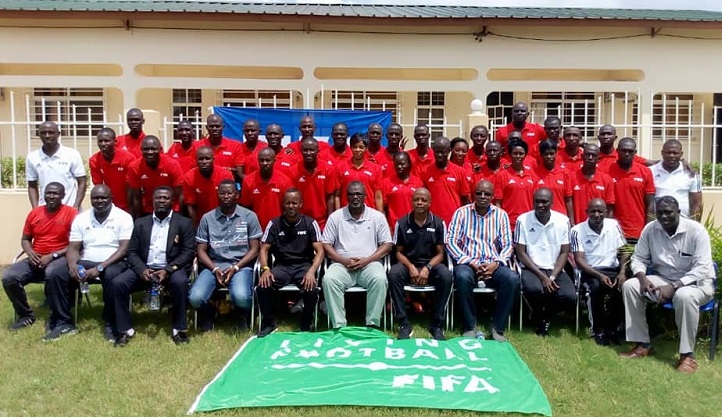 The five days Coaching training eye marked for GFF Female League Coaches from Div 1 and 2 has ended on Sunday 29th September, 2019 at the National Technical Training Center in Yundum.

The training organized by the German-Gambian Women’s Football partnership is aimed at strengthening the knowledge of the Female League Coaches in the beautiful game while also honing their skills in some game management skills ahead of the new League season in December.

Speaking at the closing ceremony over the weekend, training Coordinator Monika Staab said the course is key and timely ahead of the beginning of a new season. She noted that the training will help coaches to recollect and learn from the previous season.
“It was an intensive week of sessions and I am glad that we were able to refresh our minds on the past season to do better this time around. All the first and second division female club coaches were here and we shared great experience together” she said. She thanked the participants for their steadfast and dedication. “You all are a step ahead because we have ‘C’ and ‘D’ license holders with us”.
The renowned Women’s football expert however urged the coaches to be persistent in their quest while keeping the communication amongst them. She reminded the Coaches about her passion for women’s football and willingness to develop it higher.“I love Women’s football and want to develop and work with them. My next big task is to play Women’s Super Nawettan”, she said. She concluded by thanking the President Lamin Kaba Bajo for been the biggest supporter of Women’s football. “I have never seen a person so passionate about women’s football than Mr Bajo. I can tell you he is the main reason why I am still here”.

For his part, Gambia Football Federation Boss Mr Lamin Kaaba Bajo, expressed satisfaction on the outcome of the Gambia-German partnership saying the short term project expansion to a long term of two years is as a result of Monika’s great achievements.
President Bajo said that the Federation will always develop women football “not only in quantity but quality” and has no doubt that this course will have great impact in the coming league season. “I am sure that the coming season will be competitive. Work starts today and you must all endeavor to make the best use of the knowledge gained here”.
Mr Bajo promised that his executive would continue to ensure that all the necessary support is given. “Women’s football has gained lots of potentials. The impact would be visible within the two years and could be expanded again. The future of Football is Women Football”, he noted
Participant Veronic Malak on behalf of her colleagues, thanked the Course Coordinator Monica Staab for the relentless efforts for making the event happen as promised. She also thanked the GFF President for championing the course of Women’s football. All participants were presented a certificate of attendance.