Juba – South Sudan and Kenya have signed Memorandum of Understanding to strengths the territorial border reassertion at Ilemi triangle as a moved towards the realization of amity between the two countries.

However, the move would see teams from Juba and Nairobi negotiate a number of instruments to govern the relationship between the two countries on cross trade and investment.

The two foreign ministers have said they will continue seeking ways to strengthen trade relations between them.

“We’ll also discuss various bilateral agreements and explore ways of working together in the region,” said Deng. “As always, we are grateful for Kenya’s contribution to South Sudan, key among them peace and security.”

Meanwhile, Kenyan’s Foreign Affairs Cabinet Secretary, Monica Juma said that they had planned a series of talks of framework agreement ahead of a visit by President Salva Kiir to Nairobi – to be scheduled later in the year to review the security and management of the border between the two countries.

The two presidents will also have expected to discuss how to fast-track implementation of the peace process in South Sudan and how Kenya could cooperate on regional infrastructure development.

Dr Juma said Kenya would be seeking to benefit from South Sudan’s wealth as a form of payment for her peacekeeping efforts in the country.

“Both the Kenyan and South Sudanese teams will be negotiating a number of instruments to govern the relationship between the two countries as far as trade and investment are concerned,” said Dr. Juma during a joint Press conference with her Southern Sudanese counterpart, Foreign Affairs Minister Deng, in Nairobi.

Juma said among other things, they planned to launch the first ever joint commission for cooperation with Juba.

Also expected to feature in the talks is the ease of movement of persons and goods between the two countries.

South Sudan, which gained her independence from Sudan in 2011 after the decades of scorched – earth conflict. Immediately, the world youngest country joined the East Africa Community in April 2016, since then, the country has been keen to improve relations with countries in the bloc.

The Ilemi triangle has been series of inter-ethnic conflict, basically between the Toposa in South Sudan, Turkana in Kenya, and Nyang’atom of Ethiopia.

The Ilemi Triangle is an area reportedly named after Anyuak chief Ilemi Akwon, a territory claimed by South Sudan and Kenya and borders Ethiopia.

The status of Elemi Triangle is confusing according to international institutions and the three governments.

The dispute arose from unclear wording of colonial-era treaties, which attempted to allow for the movements of Turkana nomadic herders.

The Ethiopian government has never made an official claim on any of the Ilemi and in fact agreed that the land was all Sudanese in the 1902, 1907, and 1972 treaties.

In 2011, the Sudanese claim to the Ilemi Triangle was transferred to the new national government in Juba.

Kenya has also de facto control of part of the area, and has deployed Military and paramilitary in the area, saying the move is in response to cattle rustling and cross-border insecurity among Turkana, Toposa, Didinga, Nyangatom, Dessanach of Ethiopia and Karamajong of Uganda.

Kenya has set a base a few kilometers away from Napadapal checkpoint -unofficially giving it control over the triangle.

Perhaps, officials in South Sudan say the territory was never legally transferred to Kenya by a 1936 undertaking that allowed the British colonial governor of Kenya to administer it on behalf of the then colonial authorities in Juba. The territory was retained by Kenya after Sudan’s independence in 1956.

In recent decades, the prolong conflict in then Sudan, to now South Sudan have had delayed a resolution to the issue between Juba and Nairobi.

Now, with the recent discovery of oil and other minerals in the region, however, this raise a concerns and complicates its resolution.

South Sudan Transitional National Legislature Assembly is putting pressure on the government, particularly Ministries concerns with foreign policy to appear before the house to explain the status of disputed triangle soon.

Is Africa Rising Narrative A Propaganda Or A Reality? 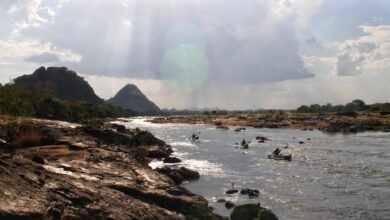