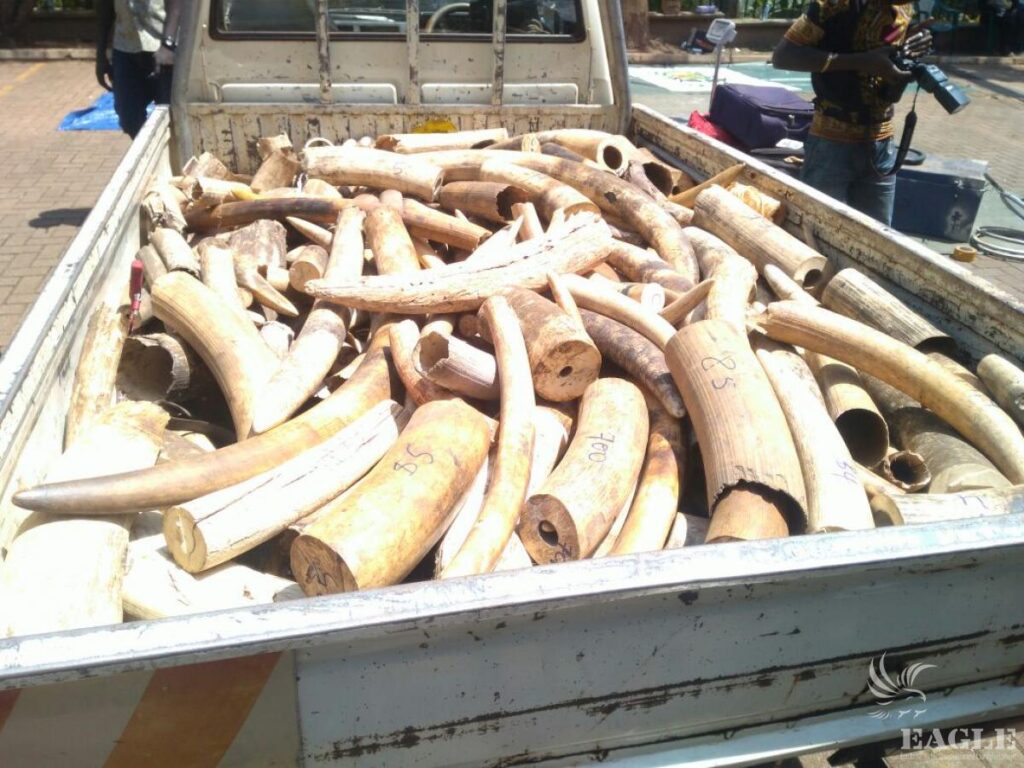 WASHINGTON – Today, Moazu Kromah (aka “Ayoub,” “Ayuba,” and “Kampala Man”), Amara Cherif  (aka “Bamba Issiaka”), Mansur Mohamed Surur (aka “Mansour”), and Abdi Hussein Ahmed (aka “Abu Khadi”) were charged in an indictment for participating in a conspiracy to traffic in rhinoceros horns and elephant ivory, both protected wildlife species, valued at more than $7 million that involved the illegal poaching of approximately 35 rhinoceros and approximately 100 elephants.

In addition, Kromah, Cherif, and Surur were charged with conspiracy to commit money laundering, and Surur and Ahmed were charged with participating in a conspiracy to distribute and possess with intent to distribute more than 10 kilograms of heroin.  Kromah, a citizen of Liberia, was arrested in Uganda on June 12, 2019, and expelled to the United States.  He was arraigned before U.S. Magistrate Judge Katharine H. Parker earlier today and detained.  Cherif, a citizen of Guinea, was arrested in Senegal on June 7, 2019, and remains in custody in Senegal pending a process through which his extradition, deportation or other lawful removal to the United States is being considered by Senegalese authorities.  Surur and Ahmed, both citizens of Kenya, remain fugitives.  The case has been assigned to U.S. District Judge Gregory H. Woods.

Manhattan U.S. Attorney Geoffrey S. Berman said:  “As alleged, these defendants are members of an international conspiracy to traffic in not only heroin but also rhino horns and elephant ivory.  The alleged enterprise, responsible for the illegal slaughter of dozens of rhinos and more than 100 elephants, was as destructive to protected species as it was lucrative.  The excellent work of the Fish and Wildlife Service and the DEA has put the brakes on an operation that allegedly peddled dead protected species and potentially deadly narcotics.”

Secretary of the Interior David Bernhardt said:  “Wildlife trafficking will not be tolerated. It is often intertwined with other major types of criminal activity including conspiracy, smuggling, money laundering and narcotics – all of which are included in the defendant’s indictment today.  The U.S. Department of the Interior remains committed to combating the illegal wildlife trade through the END Wildlife Trafficking Act and the President’s Executive Order on Transnational Organized Crime.  I would like to thank the U.S. Fish and Wildlife Service Office of Law Enforcement, U.S. Attorney’s Office, U.S. Department of Justice, and others who help bring wildlife traffickers, and other criminals, to justice.  Together, we can protect some of the world’s most iconic species while ensuring the safety and livelihood of the American people.”

DEA Special Agent in Charge Christopher T. Tersigni said:  “DEA’s global investigations with our foreign counterparts often involve transnational criminal networks involved in a wide array of unlawful acts – from drug trafficking to conspiring to commit acts of terror to international money laundering to human trafficking – that undermine the rule of law everywhere.  These suspected criminal masterminds not only conspired to traffic huge amounts of heroin to New York, but also directed a multimillion-dollar poaching scheme to traffic in rhinoceros horns and elephant ivory – both endangered wildlife species.  DEA investigations throughout the world consistently illustrate the lengths and heinous acts these global criminal individuals and networks will commit to further their illicit enterprises.”

According to allegations in the indictment unsealed today in Manhattan federal court:

Kromah, Cherif, Surur, and Ahmed were members of a transnational criminal enterprise (the “Enterprise”) based in Uganda and surrounding countries that was engaged in the large-scale trafficking and smuggling of rhinoceros horns and elephant ivory, both protected wildlife species.  Trade involving endangered or threatened species violates several U.S. laws, as well as international treaties implemented by certain U.S. laws.

Typically, the defendants exported and agreed to export the rhinoceros horns and elephant ivory for delivery to foreign buyers, including those represented to be in Manhattan, in packaging that concealed the rhinoceros horns and elephant ivory in, among other things, pieces of art such as African masks and statues.  The defendants received and deposited payments from foreign customers that were sent in the form of international wire transfers, some which were sent through U.S. financial institutions, and paid in cash.

The prosecution of this case is being handled by the Office’s Complex Frauds and Cybercrime Unit.  Assistant U.S. Attorneys Sagar K. Ravi and Jarrod L. Schaeffer are in charge of the prosecution.

The charges contained in the indictment are merely accusations.  The defendants are presumed innocent unless and until proven guilty.