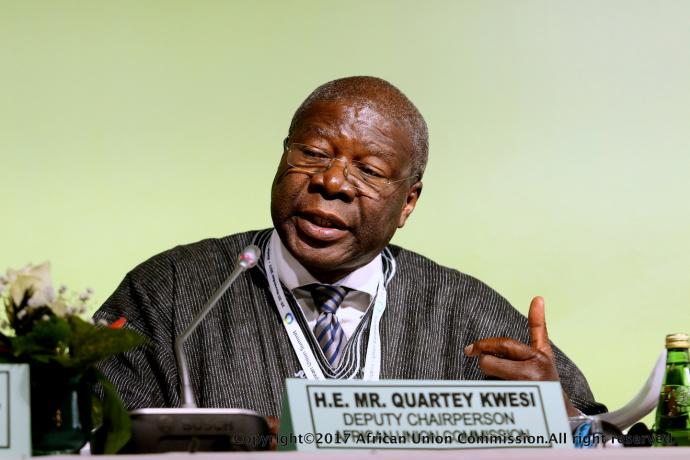 African Union Headquarters; 12th November 2018: At 31st Ordinary Session of the African Union Summit held in Nouakchott, Mauritania in July 2018, a budget of US$681,485,337 was approved for the financial year 2019. The budget covers three components operational, programme and peace support operations. The Deputy Chairperson of the African Union Commission, Amb. Kwesi Quartey, shares the five key takeaways of the adoption of the 2019 budget in what he describes as a watershed moment for Africa.

1. Give us a brief on the 2019 budget of the Union.
Amb. Kwesi; The Assembly of the Union adopted the 2019 budget for the Union at a total of US$681,485,337 at the African Union Summit held in Nouakchott, Mauritania in July 2018. This amount reflects a significant decrease of the annual budget by 12%, compared to the 2018 budget. It is also a reflection that the share of AU member states financing the budget has substantially increased compared to the partner funding in previous years. If you look at the 2019 budget, excluding the peace support operations, member states will contribute 66% of the budget while 34% is expected to be secured from our development Partners.
This increase of member states contribution has come about by implementing the decision on financing of the Union to fund the activities and agenda of the Union. Through this mechanism, we can see that the continent is gradually realizing its vision of reliable, predictable and sustainable funding of its agenda. The 2019 budget also demonstrates an enhanced process of domestic resources mobilization but most importantly, stringent measures are now in place to ensure the prudent use of these resources to meet the development needs of our Continent
The breakdown of the 2019 budget is as follows; US$161.4 million will go into financing the operational budget of the Union, US$252.8 million will go into the program budget while US$273.3 million will finance Peace Support operations.

This is the first time we had joint sittings of the AU Commission and organs, the Committee of Finance Ministers (F15) technical experts and the Permanent Representatives’ Committee sub-Committees of General Supervision and Coordination on Budget, Finance and Administrative matters and of Programs and Conferences, to prepare the budget. The preparation took about five weeks consecutively, looking carefully at the budget of each spending unit of the Union to ensure it complied with the nine golden rules.

During the 2019 budget, we also introduced the budget ceilings for departments and organs based on their track record on prudent execution rate, the ability to reach their targets and aligning their programmes strictly, to the priorities of the Union. This will greatly enhance the budget execution and ensure the expenditure is linked to results.

3. You have made reference to the nine golden rules, tell us more about that.
Amb. Kwesi; The nine golden rules are financial management and accountability principles adopted by the Assembly of the Union in January 2018. These rules are meant to ensure financial discipline within the Union to enable us decisively address issues of low execution rates, identify undetected wastages and instances of over-budgeting by departments or organs, as well as ensure full compliance with the African Union financial rules and regulations.

So far, we have fully implemented four of the nine golden rules. There is an interlinking factor on the application of all the nine rules with the progress in the implementation of the decision on financing of the Union and therefore we will soon have the other five rules applied.

The nine golden rules speak to the fact that;
a) Member states’ contributions should cover a minimum threshold of the budget to ensure the Union’s self-sufficiency and sustainability, thereby decreasing dependence on external funding.
b) The rules recognize the need for major changes to be effected to ensure revenues are predictable. This touches on elements such as the full payment of assessed contributions by Member States and partners’ contribution, for the revenue streams to be centrally coordinated.
c) The rules also speak to the credibility of the AU budgeting system which must be based on a fully integrated and automated financial management system.
d) As I mentioned earlier, one of the rules is the annual budget ceiling which is communicated to department and organs before they submit their budget proposals.
e) Also, it is important that expenditure must at all times, be authorized for virements, surplus budgets and spending that exceeds approved budgets.
f) Another key rule, is seeing to it that resource flows and transactions are reliable and efficient. Funds must be provided to departments and organs in the agreed amounts at the agreed times.
g) Institutional accountability is of utmost importance, to ensure the flow of funds is tracked to service delivery units. This requires the harmonization of all the different management systems we use.
h) Reporting is also an integral part of the financial management process. The Financial Rules and Regulations requires that departments and organs report all activities for which funds have been received, as part of the compliance and quarterly performance reports.
i) Finally, there is also the aspect on centralizing the process for engaging partners to avoid unilateral engagements for partner funded programmes.
These rules are currently being translated into AU policy and procedures and will also be reflected in the AU’s updated Financial Rules and Procedures.

4. In regards to the decision on Financing of the Union, what is the progress on that since its adoption in 2016?
Amb. Kwesi; There is commendable progress in the collection of the 0.2% levy by member states. 11 of our member states paid their 2018 assessed contributions to the AU, either partially or in full, through the new financing arrangement. We have 24 States that are at various stages of domesticating the Kigali Decision on Financing the Union and of these, 14 are actually collecting the levy.

Let me also add that there is flexibility built into the implementation of the 0.2%. Member States have the ability to determine the appropriate form and the means they will use to implement the decision in line with their national and international obligations. It is for this reason that Member States that are, for example, members of the World Trade Organization have implemented the 0.2% levy without contravening their international trade obligations.

Also, as I mentioned earlier, the introduction of the golden rules and the joint sittings have provided stronger technical oversight of the AU budget.

5. What are your projections in advancing the ongoing financial reforms?
Amb. Kwesi; Looking at the progressive developments in Africa’s self-financing agenda, I believe this is a watershed moment for Africa. Our focus is to gradually move towards funding 100% of the Union’s operational budget, 75% of the programme budget and 25% of peace support operations by 2021, for the full ownership of the Union’s agenda.
We are working on revising the Scale of Assessment as currently, 48% of the Union’s budget is dependent on the contributions of only 5 member states under “Tier 1” of the scale of assessment. This presents clear risks to the stability of the budget. It is for this reason that in a meeting held in August 2017, Ministers of Finance recommended the introduction of ‘caps’ and ‘minima’ to our existing scale of assessment, in order to improve overall burden-sharing and risk reduction.

We also want to strengthen the sanctions regime for non-payment of contributions to ensure AU Member States payments are made on time. Under the current sanctions regimes, Member States non-payment are classified to be in default only if they are in arrears for two full years. This has led to a trend where about 33% of the assessed contributions are regularly held in arrears.

Finally, we are working towards developing a credible medium-term budget framework (2019-2021) based on revenue forecasts and capacity to spend. This will enable the Union to improve the credibility of its budget, strengthen financial management capacity and accountability and demonstrate value for money and results to its Member States. We are committed to ensure the highest standards of finance and budget management as well as seeing to it that we have a credible budget based on capacity to spend and proper revenue forecasts.