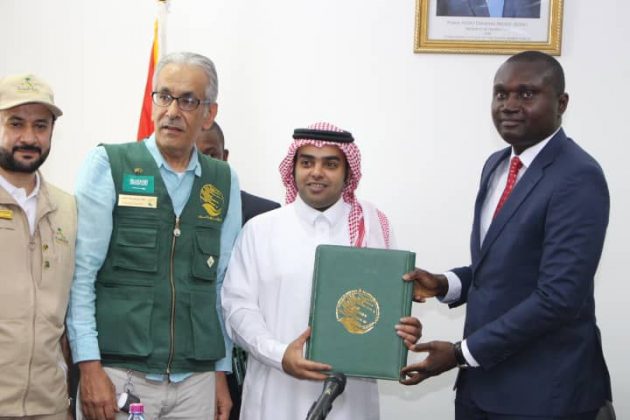 The Humanitarian Aid and Relief Centre (KSRELIEF), an Aid and Relief organization belonging to His Royal Highness, King Salman, of Saudi Arabia, has donated seven (7) containers (40) tonnes of medical relief items to the Republic of Ghana, as part of a worldwide humanitarian initiative by the Saudi defacto ruler.

The King has been under international criticism and attack following the murder of Saudi born Washington Post Journalist, Jamal Khashoggi, at the Saudi Arabia consulate in Istanbul, Turkey, last month.

At a brief ceremony held at the Ministry of Foreign Affairs and Regional Integration and attended by the Deputy Minister of the Ministry, Charles Owiredu, and the Charge’ d’ Affaires of the Royal Embassy of the Kingdom of Saudi Arabia, Mr. Abdul Karim Mohammed Alluhidan, the two officials essentially signed documents covering the items that have arrived at the port of Ghana for purposes of the donation.

Speaking through an interpreter the Charge’ d’ Affaires, Mr. Abdul Karim Mohammed Alluhidan, said the current donation is just the “tip of the iceberg” of a series of donations that the Crown Prince of Saudi Arabia plans to carry out in Ghana and other parts of the World. He was upbeat about these several other pending donations that Saudi Arabia intends to execute for the benefit of the government and people of Ghana.

Deputy Minister for Foreign Affairs and Regional Integration, Charles Owiredu registered the sincere thanks of the government and people of Ghana for the kind gesture of the Saudi Kingdom. He urged the Kingdom to consider investing in several other initiatives of government such as the one district, one factory as well as in other policy areas of government.

The King Salman Humanitarian Aid and Relief Centre, is dedicated to coordinating and providing international relief to crisis-afflicted communities, alleviating suffering and providing the essentials to allow people everywhere to live good lives.

The primary goal of the KSRELIEF is to operate the center solely on the basis of humanitarian need and without any other motive. KSRELIEF believes that it will accomplish this goal through close cooperation with fully-accredited international humanitarian relief organizations and other vital support partners.