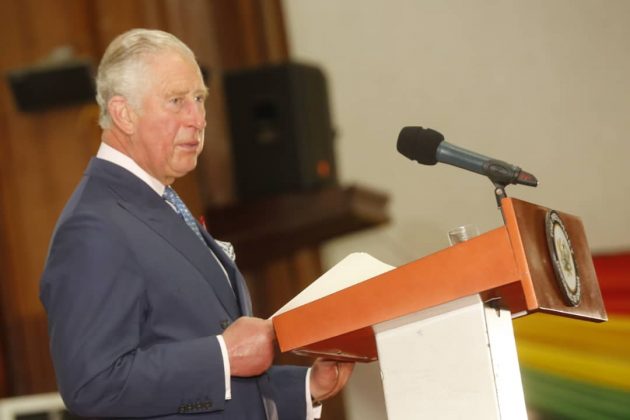 The Prince of Wales, Prince Charles, says Ghana has become a leading example to other nations and a force for good in the world. This, he said is evidenced by the strong institutions and democratic successes the Nation has achieved over the last few years.

In his Public Lecture at a Commonwealth inspired programme on the theme; “Towards A Common Future”, at the Accra International Conference Centre (AICC), the Prince of Wales, and Head of the Commonwealth, Prince Charles said even though it’s been over forty years since he last visited Ghana, “he has been following Ghana’s story closely and like so many other people, he has been profoundly impressed by the remarkable cause that Ghana has taken.”

“Over these past years your country ladies and gentlemen, if I may say so, has become an example to other Nations. It has given its citizens stability and security with strong democratic institutions, free and fair elections and the peaceful transition of power in a vibrant multiparty and multi faith democracy,” Prince Charles said.

Role of Civil Society and Chiefs

The Prince added that “at the same time Ghana’s Civil Society has thrived and its NGOs, Unions and Professional Associations are now among the most active and engaged in the region. I know too that Ghana’s traditional leaders some of whom including the Asantehene and Okyehene, I have had a great pleasure of meeting again on this visit, continue to have a vital and influential voice in your national discourse”.

The Heir Apparent to the British Throne, indicated that underlining all of the achievements of Ghana, it seems to him, “are the deeply held values of tolerance and inclusion which are imbedded in your traditional culture and enshrined in your constitution such as Protection of free speech and freedom of religious expression. While elsewhere, diversity has fuelled division and conflict, in Ghana, it has been an enduring source of strength and National pride”.

Prince Charles in celebrating Ghana’s remarkable achievements, had occasion to eulogise the Late Kofi Annan, former Secretary General of the United Nations who passed on to eternity last June.

“Here Mr. President, if I may, I would like to paid special tribute to that proud son of Ghana, Mr. Kofi Anann, who’s recent loss has been so keenly felt by people throughout this country and indeed across the World”. He added that “he will be long remembered by all those who knew him and by countless others whose life’s he touched.”