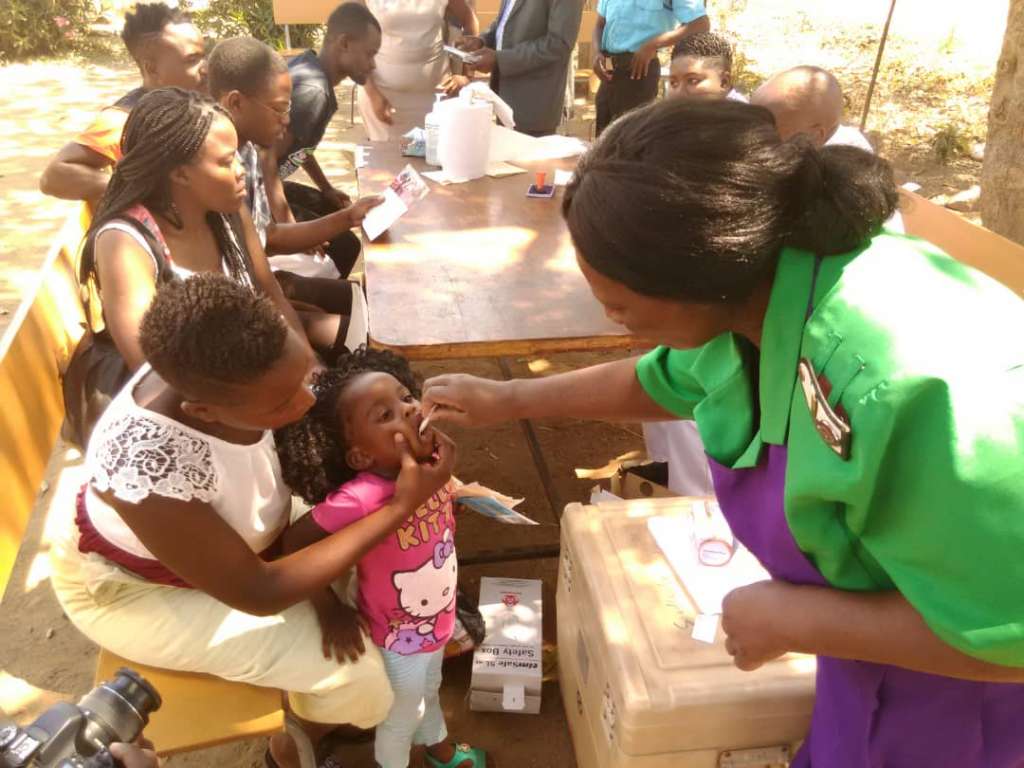 The Government of Zimbabwe with the support of the World Health Organization (WHO) and partners is launching today an oral cholera vaccination (OCV) campaign to protect 1.4 million people at high risk
of cholera in Harare.

The immunization drive is part of efforts to control a cholera outbreak, which was declared by the health authorities on 6 September 2018.The vaccines were sourced from the global stockpile, which is
funded by Gavi, the Vaccine Alliance. Gavi is also funding operational costs for the campaign.

The government, with the support of WHO and partners, has moved quickly to implement key control efforts, including enhanced surveillance, the provision of clean water and hygiene promotion,
cleaning of blocked drains and setting up dedicated treatment centres. The cholera vaccination campaign will complement these ongoing efforts.

“The current cholera outbreak is geographically concentrated in the densely populated suburbs of Harare,” said Dr Matshidiso Moeti, WHO’s Regional Director for Africa. “We have a window of opportunity to strike back with the oral cholera vaccine now, which along with other efforts will help keep the current outbreak in check and may prevent it from spreading further into the country and becoming more difficult to control.”

The campaign will be rolled out in two rounds, focusing on the most heavily affected suburbs in Harare and Chitungwiza, which is 30 km southeast of the capital city. To ensure longer-term immunity to the
population, a second dose of the vaccine will be provided in all areas during a second round to be implemented at a later stage.

“Cholera is a disease that can be prevented with clean water and sanitation: there is no reason why people should still be dying from this horrific disease,” said Dr Seth Berkley, CEO of Gavi, the Vaccine
Alliance. “Gavi has worked hard to ensure the global cholera vaccine stockpile remains fully stocked and ready to help stop outbreaks such as this. The government of Zimbabwe have done a great job in fighting
this outbreak; we must now hope that these lifesaving vaccines can help to prevent any more needless deaths.”

WHO is supporting the Ministry of Health and Child Care on a strategy for rolling out the vaccination campaign, as well as implementing the campaign and sensitizing the public about the vaccine. More than 600 health workers have been trained to carry out the campaign.The vaccination drive will take place at fixed and mobile sites including health facilities, schools and shopping centres.

WHO experts in collaboration with partners are supporting the national authorities to intensify surveillance activities, improve diagnostics, and strengthen infection and prevention control in communities and health facilities. They have also provided cholera supplies of oral rehydration salts, intravenous fluids and antibiotics sufficient to treat 6000 people.

The health sector alone cannot prevent and control cholera outbreaks. This requires strong partnerships and a response across multiple sectors, especially in the investment and maintenance of community-wide water, sanitation and hygiene facilities.

Zimbabwe has experienced frequent outbreaks of cholera, with the largest outbreak occurring from August 2008 to May 2009 and claiming more than 4000 lives.