JOHANNESBURG, South Africa, October 15th, 2018, -/African Media Agency (AMA) /-Lace up your boots because you’re about to embark on the journey of a lifetime with the family that’s bringing khaki back! The Irwins – Terri, Bindi and Robert – return to Animal Planet in a new series that gives audiences an all-access, front row seat to experience the sights and sounds of their thrilling wildlife adventures around the globe and the amazing animals that continue to inspire their conservation efforts. From running Australia’s largest family-owned zoo, Australia Zoo in Queensland, to crisscrossing the world protecting and celebrating the most wondrous animals on the planet, The Irwins work thoughtfully and tirelessly to carry on Steve’s mission to bring people closer to animals and ignite the connection that will ensure an abundance of wildlife for generations to come. CRIKEY! IT’S THE IRWINS launches as a global series premiere beginning Sunday, October 28 at 9pm and will be seen in Animal Planet’s 360 million homes around the world.

CRIKEY! IT’S THE IRWINS features the Irwins working together to care for more than 1,200 animals at Australia Zoo; overseeing a world class wildlife hospital, the largest of its kind in the world; and conducting high-octane global expeditions. Animal Planet audiences ride along with Terri as she propels Steve’s conservation mission forward, which has included expanding the once two-acre Australia Zoo into a world-class 750+-acre zoo with 105 acres open to the public. Bindi, now 20 years old, focuses her passion for animals at Australia Zoo’s Wildlife Hospital, Australia’s best equipped wildlife treatment facility which rescues, rehabilitates and releases sick, injured, or orphaned native wildlife. Robert demonstrates a curiosity, deep knowledge and expertise for all the animals around him, as well as an infectious enthusiasm to share this experience with others; a memorable trait often showcased by his father.

In the season premiere of CRIKEY! IT’S THE IRWINS, among other stories, audiences will see Robert, after months of croc wrangling training with Steve Irwin’s best friend Wes, take the final step in his journey to feed Graham, a huge crocodile at the zoo’s famous Crocoseum. Originally rescued by Steve, Graham is the Zoo’s largest and most volatile big croc, with a history of dragging Steve Irwin into the water during a routine capture, and separately injuring Wes with a surprise death roll that left him hospitalized. Bindi helps tend to Cedar, a rescue koala that has given birth to a rare set of twin joeys who must now survive the 6 to 8-month period before they can leave Cedar’s pouch. Bindi and the zookeepers face ongoing challenges to keep the twin joeys alive as nature and survival of the fittest comes into play as one of the rarest types of koala pregnancies leaves the two joeys struggling and fighting for life.
During the season, Animal Planet viewers will witness a wide range of the joy and wonder of animals as the Irwins take on many projects, including the amazing transportation of a giraffe named Scarlett, who travels over 1200 miles to participate in a breeding program as a part of the Zoo’s conservation efforts, and the release of rescued and recuperated wildlife, including Eurong the turtle, Grub, the baby Echidna, and more. Viewers will also follow the family as they travel to locations that include the stunning Lady Elliot Island, the southernmost coral cay of the Great Barrier Reef.
CRIKEY! IT’S THE IRWINS is produced for Animal Planet by Eureka where Paul Franklin, Chris Culvenor, Wes Dening and Rod Parker serve as executive producers. For Animal Planet, Erin Wanner is executive producer, Sarah Russell is producer and Paris Peckerman serves as production coordinator.
Distributed by African Media Agency(AMA) on behalf of Discovery.
For further media queries contact:
Raquel De Canha
FleishmanHillard
Tel: (011) 548 – 2047
Email: raquel.decanha@fleishman.co.za
About Animal Planet
Animal Planet, a multi-media global business unit of Discovery, Inc., is the network of hit franchise series and special programming dedicated to animals and the natural world that includes DODO HEROES, DR. JEFF: ROCKY MOUNTAIN VET, MY CAT FROM HELL, PIT BULLS & PAROLEES, TANKED, TREEHOUSE MASTERS, THE VET LIFE, THE ZOO and PUPPY BOWL, the largest non-sports TV event on Super Bowl Sunday. Animal Planet is the premiere TV, digital and social community for all things animal, providing immersive, engaging, high-quality content across all Animal Planet platforms including: Animal Planet television network, available to more than 350 million homes around the globe, complimented with a deep Video On Demand offering; online assets at http://www.animalplanet.com/, the Animal Planet GO app that allows viewers to catch up on full episodes of their favorite shows anytime, anywhere; and Animal Planet Social including Facebook, Twitter and Instagram via @AnimalPlanet.
About Discovery
Discovery, Inc. (Nasdaq: DISCA, DISCB, DISCK) is a global leader in real life entertainment, serving a passionate audience of superfans around the world with content that inspires, informs and entertains.
Discovery delivers over 8,000 hours of original programming each year and has category leadership across deeply loved content genres around the world. Available in 220 countries and territories and 50 languages, Discovery is a platform innovator, reaching viewers on all screens, including TV Everywhere products such as the GO portfolio of apps and Discovery Kids Play; direct-to-consumer streaming services such as Eurosport Player and Motor Trend OnDemand; digital-first and social content from Group Nine Media and a strategic alliance with the PGA Tour to create the Global Home of Golf. Discovery’s portfolio of premium brands includes Discovery Channel, HGTV, Food Network, TLC, Investigation Discovery, Travel Channel, Turbo/Velocity, Animal Planet, and Science Channel, as well as OWN: Oprah Winfrey Network in the U.S., Discovery Kids in Latin America, and Eurosport, the leading provider of locally relevant, premium sports and Home of the Olympic Games across Europe. For more information, please visit www.corporate.discovery.com and follow @DiscoveryIncTV across social platforms.

ABOUT EUREKA PRODUCTIONS
Eureka Productions is a US and Australian-based production company that has produced over 160 hours of programming in less than three years of operation. Eureka has created and produced a large number of original unscripted formats including The Chefs’ Line (SBS), The Employables (SBS), The Single Wives (Seven Network), Cult of Killers (Oxygen) and two upcoming series for major streaming platforms. Additionally, Eureka has produced Australian adaptations of numerous hit international formats including The Voice (Channel Nine), Australian Spartan (Seven Network) and Drunk History (Channel Ten).

Address by Deputy Minister Buti Manamela at the University of South Africa (UNISA) Conference on Decolonising Knowledge, Teaching and Learning in Higher Education 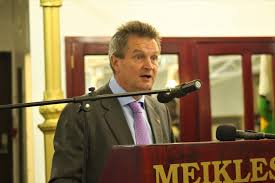