The outgoing JMEC leader has called on South Sudanese political leaders to stop buying guns, and use monies for implemented peace and development in the country.

“Instead of buying guns, buy textbooks and turn swords into ploughshares,” said Festus Mogae, Chairperson of the Joint Monitoring and Evaluation Commission (JMEC),

Mogae made this remarks on Tuesday, during a farewell reception held in his honour in Juba.

“I appeal to you (South Sudanese) to build bridges. Come together and build this youngest and beautiful African nation. Many things may have gone wrong but it is time to concentrate on the future and implement the Revitalized Agreement on the Resolution of the Conflict in South Sudan (A-ARCSS), which we all painstakingly brought to fruition,” Mogae further said.

Adding that, although the objective of a peaceful South Sudan is yet to be realized, the President said, he remains “hopeful that tragedy that befell this country, will one day come to an end” and that South Sudan leaders “many of whom are religious, will ultimately see the necessity of turning swords into ploughshares.”

“I am more optimistic because South Sudan political leaders must be tired of fighting, instead of destroying the country, they could use the natural resources to build social and physical infrastructure,” said departing JMEC Chaired.

President Mogae, who stepped down as the Chairperson of JMEC at the end of last month, appealed to the regional and international community to fully support the now more inclusive Transitional Government of National Unity (TGoNU) for the successful implementation of the R-ARCSS.

Botwana, former president was appointed in 2015 as chaired of JMEC, in aftermath of the signing of CPA between president Kiir and designated first vice president Machar, deal that collapsed in 2016.

However, Mogae thanked IGAD leadership for giving him “the opportunity to be part of the pursuit to stabilize the Africa’s youngest nation.

“That was a big honour and it is a pity that I am leaving when peace has not been completely achieved. But together, much has been achieved as well, including the constitution of key institutions and mechanisms which remain critical to the implementation of the Revitalized Agreement,” he said.

The President reflected on the missed opportunities and challenges he encountered while at the helm of the Commission, whose mandate is to monitor, evaluate and report the implementation of the Agreement.

“At one time, I pushed for the one voice message among IGAD member states. I think they listened but I don’t think they spoke with one voice, as I would have wanted them to do,” he said. “However, my appeal to launch a process for the revitalization of the 2015 Agreement was accepted,” he said.

“I depart with hope and best wishes to the people of South Sudan. Much remains to be done. I pray for the peace and tranquility that this country deserves,” Mogae concluded.

Of recently, president Kiir and opposition leader Machar signed the revitalized peace deal, in attempt to end the nearly five years which has killed hundreds thousands of people and displaced 2.5 million people from their homes.
South Sudan – eastern Africa youngest nation got her independence from Sudan in 2011, but just returned into another civil war  in mid – December 2013, over power wrangling and resources control in the ruling party, SPLM.
On Sep 25, 2018 21:25, dengatem84 <dengatem84@gmail.com> wrote:

S. Sudan president Kiir appoints UN blacklisted army general as deputy defense minister
By Deng Machol
Juba – South Sudanese President Salva Kiir has appointed UN blacklisted SPLA General as new country’s deputy defense minister.
The SPLA General Malek Reuben was appointed as country deputy minister of defense in a presidential decree announced on the state-run SSBC last Monday.
General Malek, who is under UN sanction for allegedly reported planning an offensive which targeted civilians in the former Unity State in 2015, homeland of Dr. Riek Machar, leader of the SPLM – IO.
But the SPLA has repeatedly denied the accusations.
According to the report by the Panel of Experts on South Sudan in January 2016, General Malek was one of a group of senior security officials who planned the offensive against the SPLM-IO, beginning in January 2015, and subsequently oversaw its execution from late April 2015 onwards.
General Malek was the SPLA Deputy Chief of Staff for Logistics at the time.
The Panel of Experts reported evidence, including testimony from military sources, that ammunition was supplied to youth groups by SPLA headquarters specifically for the offensive.
The attacks reportedly resulted in systematic destruction of villages and infrastructure, the forced displacement of the local population, the indiscriminate killing and torturing of civilians.
It also led to the widespread use of sexual violence, including against the elderly and children, the abduction and recruitment of children as soldiers, and large population displacement.
Earlier, the campaign group of Human Rights Watch called similar promotions “a slap in the face of justice”.
It said the move showed the impunity enjoyed by commanders accused of human rights abuses.
However, the observers criticized president Kiir’s decision, says such moved will create vacuum in justice and it will give room to the army general (s) to do more harm in the country.
General Malek, appointment comes at the time, president Kiir and SPLM – IO leader Dr. Machar signed the revitalized peace agreement, in an attempt to end the nearly fifth years conflict, that has killed ten thousands of people, and displaced 2.5 millions people from their homes.

Growth in Sub-Saharan Africa is Slower than Expected 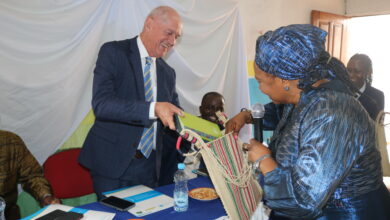