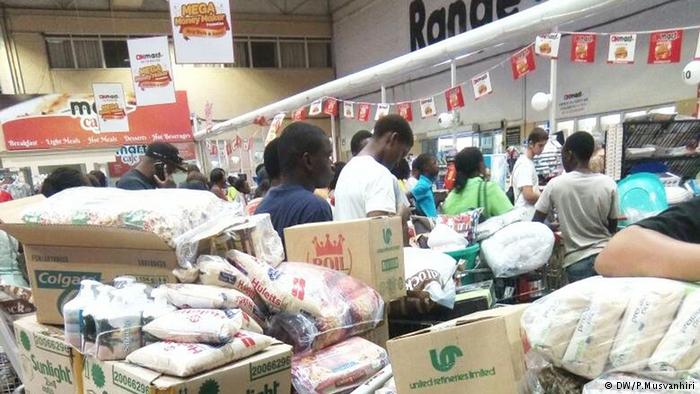 Zimbabwe’s major supermarkets and retail shops have started to ration
products following unexpected price hikes which have seen prices of
major commodities going up exorbitantly.
Only recently, major fuel retailers were battling to cope with

supply of fuel mainly petrol and diesel resulting in long queues and
hoarding.However, as of yesterday even in the city of Harare long
vehicle queues could be seen at most fuel stations indicating that
they had been some injection of fuel to the suppliers.
As of yesterday major supermarkets in the capital Harare such as OK
supermarket registered long queues with customers in panic buying
mode.
However, it is still not clear what has triggered the price hikes

since fuel prices are still maintained at the same prices.
Some small retail shops have also started to peg their prices in the
US dollar currency.Most of the shops have of late been using the bond
note which had been pegged at the same rate with the US
dollar.However, the bond note is beginning to lose value by day due to
day to day speculative black market rates.
Zimbabwe’s major hurdle has been to contain a thriving black market

where prudent financial fundamentals are a pie in the sky.
l have just today been to Food World supermarket, one of the major
retail shops in the CBD of Harare wanting to buy a bottle of drink and
have been told that l am allowed just top buy one such product.
One young shopper in the CBD of Harare just told me here that he was

only allowed to buy one bottle of water due to the rationing of
products reportedly meant to minimise panic buying and hoarding.Some
of the buyers are reported to buy the commodities in bulk from the
major supermarkets then resale them at their verandas.But this
development was partially minimised when vendors were ordered to
vacate the CBD due to cholera.
This is coming amid reports that during the past few days shoppers,

especially in Harare were in panic buying mood grabbing most of the
basic commodities in anticipation of sporadic price increases.
However, government seems to be troubled by the price hikes
development and as of yesterday, Vice-President kembo Mohadi warned
retailers hiking prices unnecessarily that their licences would be
revoked.There have been unconfirmed reports that there might be
elements of sabotaging the economy by unspecified elements.
According to the Herald newspaper, government has directed that

Further, the government directed that no businesses should reject bond
notes and other electronic payments when transacting.

With regards to the proposed two cents tax per dollar, the government
said there was no need for the public to panic as this was yet to be
implemented and still being fine-tuned.

it is reported that those who defy the directives would face
drastic action and with regards to those in the fuel sector, they risk
revocation of their licences.
It is reported that the two cents per dollar tax that was announced
by Finance Minister Mthuli Ncube on monday will apply to transactions
of $10 and above only and will be capped at $10 000 for transactions
of above $500 000.

Community forestry is being hijacked by global logging companies in Liberia, increasing risk of future conflict