Congolese gynaecologist Denis Mukwege is known as “Doctor Miracle” for his ability to repair through reconstructive surgery the horrific damage inflicted on women who have been raped.

The 63-year-old Congolese gynaecologist set up the Panzi hospital in the eastern Democratic Republic of Congo city of Bukavu nearly 20 years ago – shortly after he had his first experience of treating a woman who had been raped and mutilated by armed men.

Dr Mukwege recounted the horrific injury the patient had suffered in a BBC interview, saying the woman had not only been raped but bullets had been fired into her genitals and thighs.

He, along with his colleagues, have since treated tens of thousands of victims.

Panzi hospital now cares for more than 3,500 women a year. Sometimes Dr Mukwege performs as many as 10 operations a day.

‘Rape capital of the world’

“I… started a hospital made from tents. I built a maternity ward with an operating theatre. In 1998, everything was destroyed again. So, I started all over again in 1999,” he told the BBC in 2013.

Panzi hopsital has since grown to become a major health facility in eastern DR Congo. Its website says it has 370 doctors, nurses and support staff.

It serves a population of 400,000 and also treats patients from neighbouring countries.

Eastern DR Congo has been wracked by more than two decades of conflict, with numerous armed groups battling for control of the region’s rich deposits of gold and other precious minerals.

Many different militias have been accused of carrying out the indiscriminate rape of the region’s women.

“The conflict in DR Congo is not between groups of religious fanatics. Nor is it a conflict between states. This is a conflict caused by economic interests – and it is being waged by destroying Congolese women,” Dr Mukwege told the BBC.

In 2010, a top UN official labelled the country “the rape capital of the world”.

Women raised funds for his return

In September 2012, in a speech at the UN, Dr Mukwege criticised President Joseph Kabila’s government and other countries for not doing enough to stop what he called “an unjust war that has used violence against women and rape as a strategy of war”.

The following month he was targeted by gunmen who broke into his home and briefly held his daughters hostage.

According to his organisation’s website, his trusted friend and security guard was killed during the attack.

He later fled with his family to Sweden, then to Belgium.

He returned home in 2013 following a campaign by local women who raised funds to pay for his return ticket.

“After that gesture, I couldn’t really say no. And also, I am myself determined to help fight these atrocities, this violence.”

“My life has had to change, since returning. I now live at the hospital and I take a number of security precautions, so I have lost some of my freedom,” he told the BBC’s Outlook programme in 2013.

Dr Mukwege currently lives under the permanent protection of UN peacekeepers at his hospital.

‘I was operating when I heard the news’

He told the Nobel committee in a brief interview that he was in the operating theatre when the news of the prize came through.

“It was when I was operating and I heard people start to cry and it was so, so surprising,” he said.

“I can see in the face of many women how they are happy to be recognised and this is really so touching,” he added.

A picture of Dr Mukwege and the staff of Panzi hospital celebrating the Nobel win has been shared on Twitter: 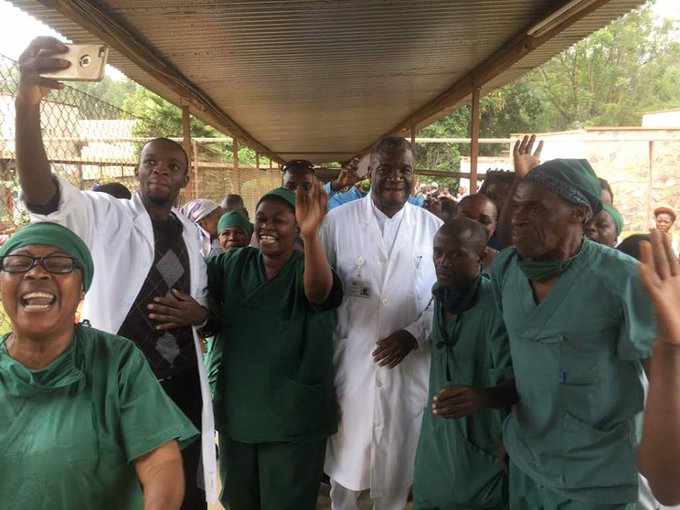 Outbursts of joy in @PanziHospital.
It’s not every day one receives the @NobelPrize.
But no time to stop. @DenisMukwege‘s in the operating theatre.
A patient is waiting.
Our battle continues. @PanziFoundation @MdMBelgique #Panzi #DRCongo #Mukwege #NobelPeacePrize

Crowds gathered at the hospital cheered and ululated to celebrate the prize which Dr Mukwege said was dedicated to the many women who were victims of sexual violence.

Although he has fallen out with DR Congo’s government, its spokesman Lambert Mende congratulated Dr Mukwege.

“We have had differences with [him] every time that he tried to politicise his work, which however is important from a humanitarian standpoint. But now, we are satisfied with the Nobel Academy’s recognition of the work of a compatriot,” Mr Mende told AFP news agency.

Dr Mukwege was born in 1955 in Bukavu. He went to medical school across the border in Burundi and later studied gynaecology and obstetrics at the University of Angers in France.

He was inspired to become a doctor after numerous visits to see the sick with his preacher father.

He has received many other international awards, including the 2008 UN Human Rights Prize. He was named African of the Year in 2009.

Researcher: Signs of anglophone crisis were there 20 years ago