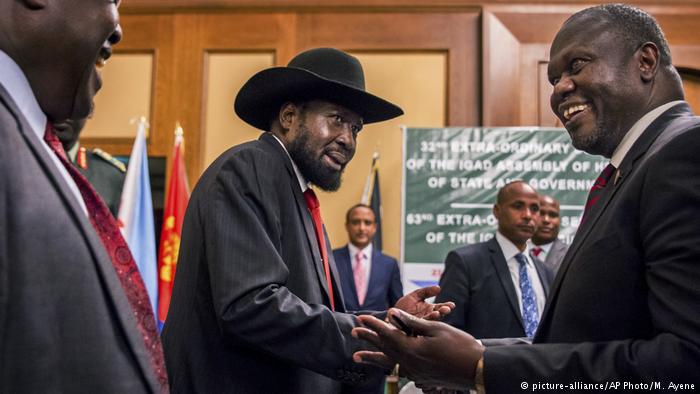 The event that took place on Wednesday evening was under the auspices of the regional political bloc, the Intergovernmental Authority on Development, IGAD.

The signing in Ethiopia came after months of negotiations and preliminary pacts. It seeks to draw a line under the conflict that began in December 2013, has caused near-economic collapse and forced more than a third of the country’s estimated 12 million citizens from their homes, fueling the world’s third-largest refugee crisis after Syria and Afghanistan.

South Sudan plunged into warfare two years after independence from Sudan in 2011 when a political dispute between Kiir and then vice-president Riek Machar erupted into armed confrontation. The civil war has killed more than 10,000 people, displaced two million and held up the country’s progress since it gained independence seven years ago.

The deal, which has international and regional backing, grants rebels and other opposition figures major positions in an expanded South Sudanese government, with Machar returning as first vice president. It won’t be enacted until May at the earliest and is the second attempt to form a transitional administration with the rebel leader after the first collapsed weeks into its implementation in 2016.

A previous peace deal signed in 2015 fell apart a year later after clashes broke out between government forces and rebels in July 2016, followed a months of the formation of TGONU.

The deal was signed by leaders of the different factions and by representatives of the IGADregion and the body’s secretariat. IGAD is currently led by Ethiopian Prime Minister Abiy Ahmed, he delivered a stern warning to the parties to ensure that the current deal does not fail.

“The eyes of the world are upon us as the South Sudan leaders commit today to press for reconciliation and lasting peace in their country,” Ethiopian Prime Minister Ahmed said ahead of the signing.

In statements after the signing ceremony, the information minister Michael Makuei welcomed the signing of the revitalized peace agreement by all the parties, said that his government from now on wards will start the implementation process.

“Nobody abstained from the agreement and from now onward we will start with the implementation. My appeal to the people of South Sudan is that let us forgive ourselves, let’s work together for the whole interest of our people,” Makuei said.

For his part, a member of the opposition group, Dr Lam Akol describes the signing as big step forward:

“I must say it is a big step forward, meaning it is a bright day for South Sudan that the parties have finally put their signature on a peace agreement that we hope will last,” Dr. Akol said, who is due to take over vice president post.

On other hand, the head of the United Nations mission in South Sudan, David Shearer, welcomed the agreement while warning the “greatest challenges are yet to come during the implementation phase.”

“The United Nations and the international community will be expected to play their role in assisting with genuine reconciliation and peacebuilding activities. However, we need to be persuaded by the demonstration of collective political will of the parties to implement an agreed and realistic implementation plan,” said David Shearer, at signing ceremony. “The key ingredient still lacking is trust. Those signing the agreement are former friends and foes. From my discussions with the parties, suspicion is widespread. It is beholden on all of us to encourage trust between parties,” he added.

The SRSG particularly acknowledged the efforts of the IGAD, the Governments of Sudan and Ethiopia who have patiently championed negotiations over the past few months and shown true leadership in bringing the parties together to sign a new agreement.

“A genuine commitment to peace and concrete actions to implement the agreement will encourage the people of South Sudan to move back to their homes to lead lives that are safe and self-reliant. And, enable the country to transition from its current dire economic state to an environment that attracts investment and development,” Shearer said.

While the government and UNMISS is optimistic about the new deal that aim to end the bloody shed in East Africa’s youngest nation, the Troika countries remain skeptical over the latest deal.

“We remain concerned about the parties’ level of commitment to this agreement and to the Cessation of Hostilities Agreement,” said a statement on Wednesday by the UK, the U.S. and Norway, the troika that worked to bring South Sudan to independence in 2011. To be convinced of both sides’ the commitment to peace, they need to see a significant change in approach, the statement read in part.

The troika countries want to see an end to the violence, full humanitarian access given to aid workers, the release of political prisoners and see checks on executive and majority power and the transparent use of resources.

“This must include, but not be limited to: an end to violence and full humanitarian access; the release of political prisoners; and a real commitment to effective and accountable implementation, demonstrated by supporting robust security and enforcement mechanisms, checks on executive and majority power, and the transparent use of resources for the benefit of all South Sudanese,” they said. “Without progress in these critical areas, we remain concerned the agreement will not deliver the peace that the people of South Sudan deserve,” they further added.

Of recently, the Troika and the European Union threatened to stop their support for the activities and institutions tasked with the implementation of the South Sudan peace agreement.

According to the Revitalized Agreement on Resolution of the Conflict in the Republic of South Sudan (RARCSS), a pre-transitional period of eight months shall come into force within two weeks of the signing revitalized agreement. At this period, the parties are expected to commit to their people and the international community that they will not return to war.

However, the IGAD’s information program manager shared details of the 128 – page document which chiefly among others was expected to lead to the formation of a revitalized transitional government of national unity, RTGoNU.

The RTGoNU is to be based in the capital Juba and will be expected to steer affairs of Africa’s youngest nation for a period of thirty-six months. The transitional period is expected to commence eight months after the signing of today’s agreement.

The term and mandate of the RTGoNU shall be for the duration of the Transitional Period, until such time that elections are held, except as provided for in this Agreement.

The RTGoNU is expected to last for three years. The RTGoNU shall hold elections sixty (60) days before the end of the Transitional Period in order to establish a democratically elected government.

The mediators also maintained the four vice presidents, with the incumbent TGoNU nominating two, and then the SSOA, and the SPLM – FD nominating one each.

In the deal, Sudan and Uganda troops will be deploy in South Sudan to ensure the full commitment of the parties to the agreement.

For the deployment of Ethiopian and Kenyan troops, the deal provides issue of deployment of the RPF shall be handled through the engagement of IGAD and the UN Security Council.

Ethiopia is already present in South Sudan as the peacekeeping operation which is part of the monitoring mechanism. Kenya was part of the UN mission but withdrew its troops after a UN reporting blaming the UNMISS force commander, a Kenyan general for not taking the necessary measure to protect civilians in July 2016.

This latest peace deal brings to an end the talks on the revitalization of the 2015 peace accord, which was violated in July 2016 when the bodyguards of Kiir and Riek clashed at the presidential palace in Juba.