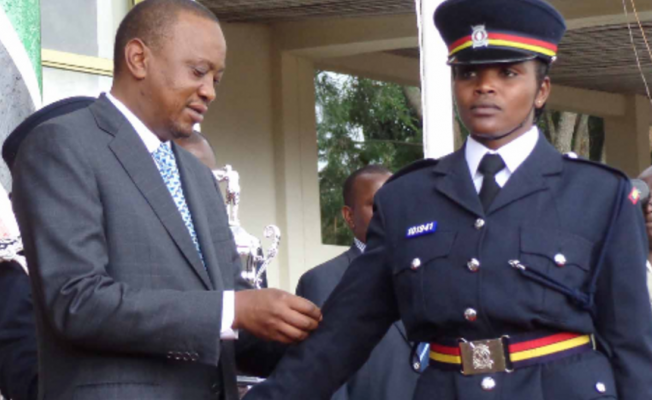 The changes touched on uniforms, command, housing and training. The forms include the integration of functions, rebranding, scrapping of some positions and renaming.

Speaking at Kenya School of Government, a state corporation offering management training, research, consultancy and advisory services to the public, the Head of State disclosed new uniform consisting of Persian blue shirt/blouse, Persian blue pair of trousers and a beret with the same colour. The Navy blue and jungle green colours donned by police for long period of time has turned out to be history.

“We want to have a better visibility of the officers by introducing the new unforms,” he reiterated.

He also revealed that the Kenya Police Service will be emerged with the administration police (paramilitary security unit) into General Duty Police officers under the command of the Inspector General of police. Majority of the administration police officers will be absorbed into the Kenya Police Service and the remaining will have their duties refined.

Their main role will be providing security to government facilities and buildings such as at ports and Standard Gauge Railway. Administration Police camps will be turned into police stations.

“We will integrate 39, 680 police officers and 24, 572 administration police into general duty police officers under the command of Deputy Inspector General police, leaving a total of 64,252 officers given the unified command to offer better security for Kenyans,” said President Kenyatta.

The Head of State also hinted at provision of house allowances to junior police officers who live in the institutions’ houses. They have been given 90 days notice to vacate upon receiving the allowances.

“The policy of mandatory and free housing for junior officers in institutional houses is hereby abolished. Instead, house allowance will be provided. All the police officers in police lines will be required to enter into private tenancies with property owners. They shall vacate within 90 days of the new allowance,” President ordered.

Deputy Inspector-General in charge of Kenya Police has been mandated with public safety and security which his Administration police counterpart will deal with protective and border security.

President Kenyatta also divulged that all police officers will undergo refresher training to help them understand the new structure and functions.