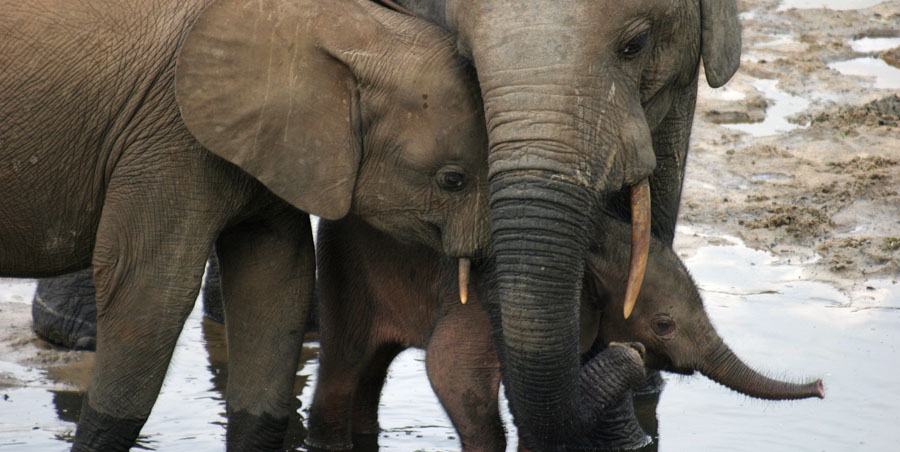 Deep in the rainforest in a northern corner of the Republic of Congo, some of the most sophisticated monitoring of animal sounds on earth is taking place. Acoustic sensors are collecting large amounts of data around the clock for the Elephant Listening Project.

Forest elephants are in steep decline; scientists estimate two-thirds of Africa’s population has likely been lost to ivory poaching in recent decades. Africa’s savannah elephants have also declined by 30 percent over a recent seven-year period, primarily because of poaching, according to results released in 2016 from Paul G. Allen’s Great Elephant Census.

But those working to save these species, which are critical to keeping ecosystems in balance and that also draw wildlife tourists, have a powerful new tool at their disposal: artificial intelligence.

Conservation Metrics, a Microsoft AI for Earth grantee based in Santa Cruz, California, uses machine learning to monitor wildlife and evaluate conservation efforts. It is applying its sophisticated algorithms to help the Elephant Listening Project, based at Cornell University’s Lab of Ornithology, distinguish between forest elephant calls and the other sounds in a noisy tropical rainforest. It’s a perfect job for AI — looking for these rare patterns in terabytes of data that would take humans years.

Researchers use the elephant call data to build more accurate and frequent population estimates, track their movements, provide better security and potentially to identify individual animals, which can’t be easily seen from the air.

It is one of many ways biologists, conservation groups and Microsoft data scientists are enlisting artificial intelligence to prevent the illegal killing of elephants across Africa, stop the global trade in their parts and preserve critical habitat. Efforts include using machine learning to detect real-time movement patterns that could alert rangers to poaching and blocking online ads that attempt to sell illegal ivory or elephant parts.

Scientists with the Elephant Listening Project estimate that Africa’s population of forest elephants has dropped from roughly 100,000 animals in 2011 to fewer than 40,000 animals today. But those numbers are largely based on indirect evidence: ivory seizures, signs of poaching and labor-intensive surveys that are too expensive to be done regularly.

The Elephant Listening Project has spent more than three decades researching how elephants use low-frequency rumbling sounds to communicate with one another. More recently, those scientists began to use acoustic sensors at research sites to build population estimates and, ultimately, to track and protect forest elephants across their ranges in Central and West Africa.

If scientists find, for example, that at specific times of year elephants are using clearings in an unprotected logging concession to access scarce minerals or find mates, scientists can work with the loggers to schedule their work to minimize disturbance and reduce conflicts.

But there has been a bottleneck in getting data out of these remote African forests and analyzing information quickly, says Peter Wrege, a senior research associate at Cornell who directs the Elephant Listening Project.

“Right now, when we come out of the field with our data, the managers of these protected areas are asking right away, ‘What have you found? Are there fewer elephants? Is there a crisis we need to address immediately?’ And sometimes it takes me months and months before I can give them an answer,” says Wrege.

Conservation Metrics began collaborating with the Elephant Listening Project in 2017 to help boost that efficiency. Its machine learning algorithms have been able to identify elephant calls more accurately and will hopefully begin to shortcut the need for human review. But the volume of data from the acoustic monitors is taxing the company’s local servers and computational capacity.

Microsoft’s AI for Earth program has given a two-year grant to Conservation Metrics to build a cloud-based workflow in Microsoft Azure for analyzing and processing wildlife metrics. It has also donated Azure computing resources to the Elephant Listening Project to support its data-processing costs for the project. The computational power of Azure will speed processing time dramatically, says Matthew McKown, the CEO of Conservation Metrics. The platform also offers new opportunities for clients to upload and interact with their data directly.

It takes about three weeks for computers to process a few months of sound data from this landscape-scale study, says McKown. Once the Azure migration is complete later this year, that same job may take a single day.

“It’s a huge improvement. We’re really interested in speeding up that loop between having equipment monitoring things out in the field and going through this magic process to convert those signals into information you can send into the field where someone can take action,” says McKown. “Right now, that process can take a really long time.”

‘We’ve only scratched the surface’

Across the continent in East Africa, Jake Wall, a research scientist with Save the Elephants who collaborates with the Mara Elephant Project and other conservation groups, typically has more immediate access to data about the savannah elephants he studies in Kenya and seven other countries. That’s because animals in those populations have been outfitted with GPS tracking collars that transmit location data via satellites and cell networks.

That information is uploaded to the Domain Awareness System (DAS), a real-time data visualization and analysis platform now used in protected areas across Africa. It integrates data from about 15 different sources today, including ranger vehicle and radios, animal trackers, camera traps, drones, weather monitors, field reports, snare locations and satellite imagery. The tool was developed by Paul G. Allen’s Great Elephant Census, another AI for Earth partner that is moving the DAS system and its data onto the Azure cloud, to give managers a real-time dashboard that can inform tactical decisions for interdiction against suspected illegal activity or apparent threats to endangered wildlife.

In some areas, DAS also powers a Save the Elephants tracking app that can alert rangers when an animal has slowed or stopped moving via email or text message. The app can also warn when animals are heading toward human settlements where they might raid a farmer’s crops. Reserve managers or the farmer can then help herd the animals back to safety. From Gabon to Mozambique to the Congo, some 463 animal tracking devices are deployed, of which 358 are on elephants.

In other projects, Microsoft has worked with the Peace Parks Foundation, which combats rhino and other wildlife poaching in South Africa, to create remote sensing systems that can detect and evaluate poaching risks. Microsoft, through a NetHope Azure Showcase grant, is also helping move the open-source SMART (Spatial Monitoring and Reporting Tool) Connect to the Azure cloud. It is used in dozens of conservation sites across Africa to improve the effectiveness of wildlife patrols.

AI for Earth has also provided grants to researchers at the USC Center for AI in Society (CAIS) and Carnegie Mellon University, who have created and are continuing to improve Protection Assistant for Wildlife Security (PAWS). It uses machine learning to create patrol routes based on where poaching activity is most likely to occur. USC CAIS has also created and is continuing to improve the Systematic Poacher Detector, which detects poachers and wildlife in nighttime drone footage, now being used by organizations including Air Shepherd.

Even with advances in radio collar technology, sensors and imagery collection, a lot of additional work is needed to turn that data into scientific insights or actionable intelligence, says Wall.

“I think we’ve only scratched the surface of what’s possible,” says Wall. “We’re really excited because the expertise that Microsoft and AI for Earth can bring to the table includes skillsets that field biologists don’t typically have.”

“Machine learning could be applied to seven or eight immediate things that I would love to know more about, whether it’s recognizing individual elephants or picking up on changes in movement behavior or figuring out what’s happening on a landscape level with human expansion and deforestation,” says Wall.

Wall has been collaborating with Dan Morris, a Microsoft researcher working with AI for Earth, on a half dozen project ideas. One examines how to use machine learning to identify streaking behaviors — when elephants run fast and in an unusually straight line — that can be a sign of poaching or other threats.

Morris has also been working to apply machine learning algorithms to camera traps, which are remote field cameras that are triggered by motion and photograph anything that crosses their path. But finding an animal of interest can be like looking for a needle in a haystack.

“Sometimes no one has time to look through these images and they end up sitting on a grad student’s shelf somewhere,” says Morris. “The potential for machine learning to rapidly accelerate that progress is huge. Right now there is some really solid work being done by computer scientists in this space, and I would guess that we’re less than a year away from having a tool that biologists can actually use.”

Wall and Morris are also beginning to work on using AI to distinguish between elephants and other animals like buffalo or giraffes in aerial photography. Knowing when and where elephants are coming into contact with other wildlife — and particularly domesticated animals like cattle — can help rangers minimize conflicts with humans and help scientists better understand disease vectors.

These insights can also inform land-management decisions, such as where to lobby for protected areas and where to locate human infrastructure like roads and pipelines. That’s one of the most significant yet least understood threats to elephant survival, says Wall. With access to the right imagery data, AI tools could help begin to keep tabs on, and draw useful insights into, human encroachment into their habitat.

“We’re always focused on poaching and these acute problems, but really it’s the expansion of human settlements and the advancements of roads and railways and pipelines that are going to affect African elephant populations going forward,” says Wall.

‘AI is really the key piece’

Saving elephants isn’t just about stopping poachers where they hunt. Disrupting the global marketplace that rewards them economically is equally important.

Microsoft and other tech companies have joined the Global Coalition to End Wildlife Trafficking Online, organized by the World Wildlife Fund (WWF) and partners TRAFFIC and the International Fund for Animal Welfare. After observing that trafficking in wildlife parts like elephant ivory, animal skins and live pets had largely moved from physical marketplaces to the internet, they convened companies from across the online landscape to combine forces to stop it.

Along with targeting the illegal trade in elephant products, the coalition partners target criminal transactions such as the sale of tiger cubs for pets and the trade in pangolin scales and illegal coral.

“Previously cybercriminals were able to operate pretty freely on the internet because there wasn’t much risk,” says Giavanna Grein, a wildlife crime program officer at WWF. “But now we’re creating deterrents and consistency across all the different platforms — if every time a criminal creates a new account and puts up a new post, it’s taken down immediately, that’s going to be really frustrating for that criminal.”

The coalition has since worked with search engines like Bing, e-commerce sites and social media companies to adopt strong and consistent policies about what products are prohibited on their platforms. WWF also provides training to help companies recognize and shut down advertisements and customer accounts that traffic in illegal wildlife.

That involves some mix of human detective work and algorithms that search for keywords associated with wildlife trafficking. In September, Microsoft’s AI for Earth team will host an AI-focused workshop for tech companies and academics working to enhance automation to detect illegal wildlife and their products online. The goal is to advance technologies to identify and root out endangered species posts before anyone has a chance to see and purchase them.

“AI is really the key piece in combating wildlife trafficking online. While it’s not the only solution needed, automating the review of posts containing illegal wildlife and their products would drastically increase the barrier to entry for wildlife cybercriminals,” says Grein.