Today is a special day of pride for the continent of Africa. This day represents some of Africa’s milestones in the successful interweaving of science, technology and innovation into our solutions of dealing with our developmental challenges in our quest to catch up with the rest of the world and make our contribution to world civilisation.

The National Development Plan Vision 2030, which is our blueprint for positioning South Africa on a greater development path, states that “science, technology and innovation must play an increasing role in skills development, job creation and economic growth”.

In mobilising our nation to respond the emerging opportunities that are presented to humanity by the evolution of science and technology, the African National Congress as the governing party has committed to the transformative science, technology and innovation.

This commitment to science, technology and innovation, takes into account the evolving debates, research output and inventions precipitated by the evolution of the Fourth Industrial Revolution.

For our part as South African government, our Department of Science and Technology is making investment in research and development to realise the coming into life of this revolution. To this effect, we will develop a public-funded science, technology and innovation plan of action over the next 12-18 months that will result to socio-economic impact.

Through smart investments in research and development, the Department of Science and Technology is supporting South African industry to grow and create more jobs through building scientific, technological and knowledge-based capabilities.

This international partnership of the Square Kilometre Array, strengthens our collaboration as partner countries, scientists and researchers as well as private sector players. This collaborative work, will unlock the full potential of our research and development that respond to the challenges and opportunities of the 21st Century.

We are today demonstrating to the world and ourselves that nothing is impossible once we set our minds on a common objective, and pool our resources to achieve such an objective.  As the African continent, we take this opportunity to thank the world for having confidence in us, and entrusting us with a global science project of this magnitude.

Today here we are, launching the SKA Phase 1 in the form of the 64-dish MeerKAT radio telescope. We take pride in the fact that a project of this magnitude was completed on time and within the originally projected budget of R3.2 billion. This efficiency and precision demonstrate our capability of managing major projects.

It is my greatest honour to be part of this historic moment to launch the MeerKAT Telescope in the beautiful province of Northern Cape.

We also wish to convey our collective gratitude as Africa to the SKA funders and the coordinating consortium compromising Australia, Canada, China, Germany, India, Italy, New Zealand, Sweden, the Netherlands, the United Kingdom and my country South Africa.

We also thank our African sisters and brothers who supported the South African bid to have this iconic instrument built on our land. To the people and governments of Botswana, Namibia, Mozambique, Madagascar, Mauritius, Kenya, Zambia and Ghana, this is your success too.

As you know, the SKA project is an international effort to build the world’s largest radio telescope, with a collecting area of approximately one square kilometre.

This iconic instrument will produce science that changes our understanding of the universe.  It will be co-located in Australia and Africa.

It is a factor that deserves mentioning that the telescope will be the largest of its kind in the world, with image resolution quality exceeding the Hubble Space Telescope by a factor of 50 times. This will give the SKA unprecedented scope in observations, enabling it to produce transformational science.

We recall with great level of excitement that South Africa’s involvement in the SKA began in 2001, when the country was an observer in the project.  That observer status turned into an expression of interest to bid for the hosting of the telescope.

It is now our proud history that the eight African countries I mentioned above became a solid part of the African bid. There was no shortage of support for our resolve.

The African Union Heads State and Government supported our bid to host the SKA and committed Africa to participate in the global SKA project. The success of this project demonstrate that fulfilling Africa’s Vision 2063 is possible.

That massive and agitated support fell on fertile ground because South Africa’s vision for astronomy is to become a hub for astronomy sciences and facilities, as articulated in our Ten-Year Innovation Plan 2008 to 2018, and the National Strategy for Multiwavelength Astronomy adopted by our Department of Science and Technology in 2015.

You could say the universe is on our side.

South Africa has a natural geographical advantage that makes it suitable for cutting-edge astronomy research across a multi-wavelength continuum.

Through flagship astronomy projects such as the MeerKAT here in Carnarvon, the Southern African Large Telescope in Sutherland, and the African Very Long Baseline Interferometry Network, the country is gradually positioning itself as a global centre of excellence in multi-wavelength astronomy research.

We moved swiftly as South Africa to preserve our geographic advantage by passing the 2007 Astronomy Geographic Advantage Act, one of the most progressive pieces of legislation in the world.

We owe the launch of the MeerKAT 64 dishes to this preservation move. But a significant milestone was reached when, with the integration of 16 dishes, the First Light image was obtained.

That was a clear indication that the MeerKAT would, once fully operational, take its place among the world’s leading research instruments.

Accordingly, the MeerKAT was recognised by the construction industry when it became the first recipient of a Special Platinum Award at the 2017 Logistics Achiever Awards. The Awards celebrate excellence in the application of operational logistics and supply chain management principles.

The longevity and sustainability of the SKA project are anchored in the fact that we have managed to develop in-house capacity in the Continent.

The MeerKAT project is an iconic scientific instrument designed entirely by South Africans.  Furthermore, 75% of components that went into the construction of the MeerKAT were sourced locally.

This has empowered local industry and institutions to acquire skills and expertise in advanced technologies, and to grow their international competitiveness.

There is no doubt that the launch of the MeerKAT further strengthens the prospects of a larger role for South Africa in the construction of the SKA, and promises numerous benefits for the country and the region as a whole.

There has been visible impact on the real estate sector of the Northern Cape, which has led to new economic opportunities for local communities.

It gives me pleasure that the SKA project has had a direct impact on job creation thus changing the lives of many families. The SKA project has created 7 284 employment opportunities through the construction of the MeerKAT and related projects.

These include land acquisition, the resurfacing of 80 km of road to the site, the construction of 110 km of power lines, fibre rollout, as well as the MeerKAT data centre.

I should share with you that the SKA project spin-offs have come handy in the advancement of our National System of Innovation.

This brings all of these under the umbrella of the South African Radio Astronomy Observatory.  It is an important step towards our ambition to create in the medium to long term, a national astronomy institute to house all aspects of astronomy in the country.

The MeerKAT has already made a significant scientific contribution, observing a rare burst of activity from an exotic star known as a magnetar.

This observation and the subsequent publication of an article in The Astrophysical Journal demonstrates the outstanding capabilities of the MeerKAT as a new instrument for scientific exploration.

In 2017, the Southern African Large Telescope and MeerKAT telescope also played an important role in a significant astronomy event involving the observation of gravitational waves.

This proves that our telescopes have joined the league of globally sought after instruments for conducting big science, something that all Africans can be proud of.

We are aware that the SKA project’s sustainability would be doomed without a supportive human capital development programme.  The Programme has awarded 961 bursaries in science and engineering, including 133 bursaries for recipients from other African countries.

SKA South Africa also introduced mathematics and science at the local school and employed a teacher for these subjects. Currently, learners from the surrounding towns of Carnarvon are accommodated at the hostel at Carnarvon High School to study these subjects.

Through this initiative, 7 learners obtained good passes and are enrolled at various universities.  The number of Carnarvon High School learners that are benefiting from full-cost undergraduate bursaries and Technical and Vocational Education and Training College funding continues to grow.

The SKA will further assist local schools with programmes in school management, numeracy and literacy development, and early childhood development.

The importance of early childhood development in producing future scientist, cannot be over-emphasised as this lays the foundation for holistic development, whilst cultivating lifelong learning.

Further, the SKA has established a temporary technical training centre in order to create a pool of artisans and semi-skilled workers in Carnarvon and nearby towns.

Twenty-one students who graduated from the centre have found employment at the SKA.  A further 25 are currently undergoing work-based experiential learning at the SKA and will complete trade tests in 2019 with the prospect of being employed on the project.

There will be further local partnerships and tourism projects that would support this SKA.

South Africa’s geographic position has enabled the Hydrogen Epoch of Reionisation Array radio telescope, to be located in the Karoo Astronomy Reserve. This will enable astronomers to study the formation of the first stars and galaxies in the universe.

We are pleased to announce that the SKA South Africa-led consortium has received about 2,2 million Euros from the European Union’s Horizon 2020 Fund to undertake a detailed infrastructure design for the SKA site.

Last week on the 5th of July, we hosted President Nana Ado of Ghana on a State Visit. During that visit, our two countries strengthened their partnership and economic relations.

We note with pride that Ghana recently became the first of South Africa’s eight African SKA partner countries, to complete the conversion of a redundant communications antenna into a functioning radio telescope. The telescope was successfully launched in Kuntunse, Accra on 24 August 2017.

Since its launch, the Kuntunse Radio Telescope has successfully carried out its First Light observations. This is a testament to the hard work of the teams in South Africa and Ghana, the support of their European colleagues, and the vision of the African Very Long Baseline Inteferometry Network project, which is strengthening Africa’s leading role in the international SKA project.

The launch of this MeerKAT project bears testimony to this fact. Science is the instrument we are going to use to expedite the meeting of our Sustainable Development Goals targets.

With this few words, I invite the world to come and witness what the united efforts and collaboration of all partner nations can achieve to advance human civilisation. 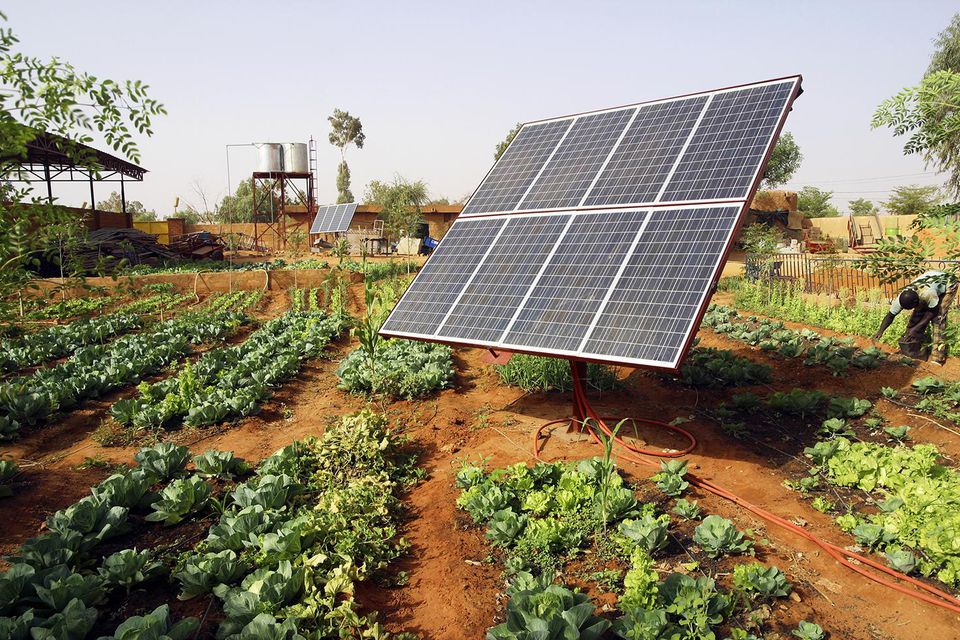