Nigeria’s Senate President, Bukola Saraki and Speaker, House of Representatives, Yakubu Dogara have described as ” a desecration of the legislative sanctity”, the on-going situation in Benue State in which eight out of the 30 members of the State House of Assembly have commenced impeachment process against the governor and with the support of the police, the 22 other members who constitute more than two-third majority are kept away from the Assembly complex.

In a statement jointly signed by their media aides, Saraki and Dogara also called on President Muhammadu Buhari to call the police to order and stop being used to achieve political purposes.

“We have monitored closely the development in Benue State in which the impeached Speaker, Terkimbir Ikyange led seven other members to serve impeachment notice on the state Governor, Samuel Ortom while the 22 other members who constitute more than two-third majority have been prevented from having access to the chamber. We believe this is illegality and does not conform to parliamentary procedure on impeachment.

“We also note with surprise the role of the Police in this undemocratic events in which the minority is seeking to impeach a Governor against the position of the majority. We believe it is the sacred institution of the legislature that is being desecrated and rubbished in all these negative developments.

“The situation in Benue State House of Assembly has grave implication for the nation’s democracy  and it represents a throw-back to the period of dictatorship in our country. It also represents how the Nigeria Police are being misused to achieve political end. In a statement recently, the Presidency derisively referred to an era in the past where a minority number of legislators was used to impeach Governors who were unfriendly with the Federal Government. What we are seeing in Benue now is a return to that inglorious era.

“We believe this unlawful and unconstitutional move to impeach Governor Samuel Ortom by a minority should be condemned by all lovers of democracy, at home and abroad. We call on President Muhammadu Buhari to call the police to order and prevent a break-down of law and order. We also call on friends of Nigeria in the international community to lend their voice in condemning the perpetration of illegalities and actions that can subvert our democracy.

“There is already a tense atmosphere in Benue State following the recent killings. Nobody should encourage any action or move which may exacerbate the security situation in the North Central State.

As leaders of the Federal legislature, we are ready to work with our colleagues in both chambers of the National Assembly to prevent any attempt to destroy any state legislature or use it to derail democracy”, Saraki and Dogara stated. 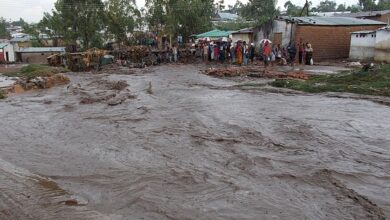