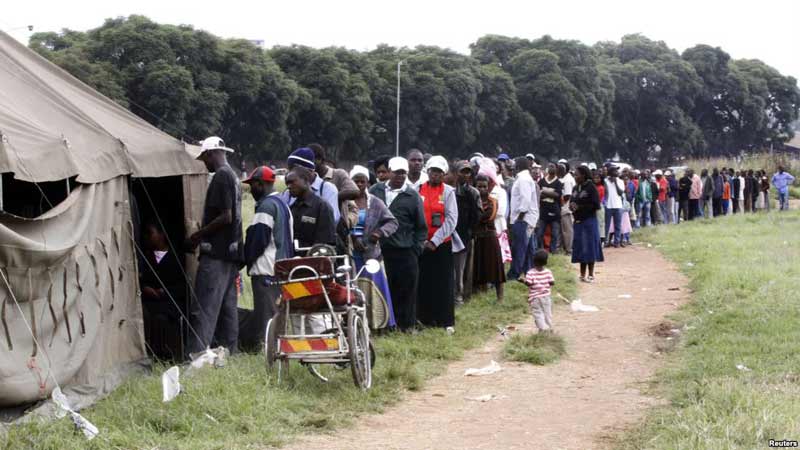 Addressing Journalists today in the morning in Harare at a local hotel, Rindai Vava said these are evading all 210 constituencies in the country’s ten provinces. Vava said the voting is of calm and the mission is deployed to observe free, credible elections around the country,

‘ ’At the moment its calm ,, peaceful and there is hope this goes well up the end of the day .It is only that MDC ALLIANCE and ZANU PF are breaking the Law in some constituencies . This could be greediness at constituency not national level. We only fear protests at the announcements of the results because there are some people hoping, expecting what might not be there ‘’

‘’Secondly , fears from those who think there are tricks here and there and that there might have been unfavorable feeling towards others by Zimbabwe Electoral Commission . We are just listening and looking at what is happening, where is it and who is involved and why’’,

Speaking as well  , Lizwe Jamela representing Election Situation Room  ,  said some political parties are breaching section 7[1][b] of the Electoral Act which prohibits any political party from publishing statements from mid-day the day before elections .

‘’There have been door to door campaigns, small meetings and distribution of party regalia. ITS MDC ALLIANCE AND ZANU PF WHO ARE GUILTY OF VIOLATING THE COOLING DOWN PERIOD. Statements were published from mid-day the day before elections.

‘’This is prohibited by the Electoral Act in the country. This is done by MDC Alliance and ZANU PF members. They moved from door to door campaigning. However, the huge euphoria is with MDC Alliance Party members.’’

‘’We made this report to ZEC and they are promising to mend out on the issue. Apart from all this there are reports of intimidation and harassments prior to elections. There are threats of removal of food aid to the people who are known to have been receiving this food aid.

‘’This is particularly ZANU PF . Still MDC Alliance has its wrongs and rights, but at most they are on the right side. ZANU PF is the one reported on the issue of food handouts for winning sake.

According to a survey carried by a number of Journalists, they are long queues indicating that there are delays with the work of someone not fulfilling and taking the task at full hand. There are also reports of delay of the ballot papers for the ward councilors.

There are fears of tension as they are long queues observed outside most polling stations. In many places people are organized alphabetically instead of on a first come first to be served basis for ease of processing

In some areas like in the Midlands province, observers were denied entry to polling stations. Some of the areas are Silobela in the Midlands Province in Mutare north and west, and in Mashonaland west. Sometimes observers are allowed to enter but not allowed to witness opening processes.

There is also confusion of village heads standing as party heads in areas like Mt Darwin north of the country, parts of Mashonaland Central and in Mutare 257 kilometers from Harare travelling to the east of the country.

A number of cases of police officers and party agents going behind the screens to observe voters being assisted have been reported. There is evidence of photographs and vides received ‘, ESR will report fully on all cases of forced assisted voting.

In Goromonzi some people who were on the voters roll during inspection are no-longer on the list. The big figure was discovered in Harare .This has become a concern with the Election Situation Room and Zimbabwe Election Support Network.

Why identity verification matters for mobile operators in Africa