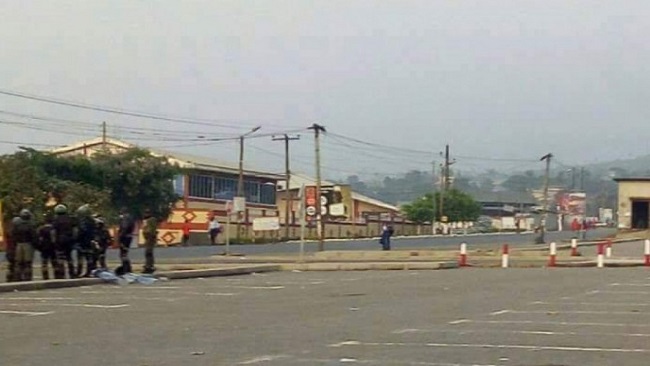 In my last article I focused on the Amba Fighters – how they are perceived as freedom fighters ready to take bullets for their people  (https://www.panafricanvisions.com/2018/life-war-zone-30-days-ambazoniaanglophone-cameroon-5/). We must understand their activities as part of the Anglophone project to de–Francophonize Ambazonia. They are of a generation that is hostile to all forms of tyranny. And anyone who stands on their way, be s/he armed or not, is treated as an obstacle to freedom. We are now caught in a scenario where the government no longer has monopoly to discipline bodies or openly inflict pain on people through the gun. This dramatic change within the past nine months has seen disenchanted youths fighting what they see as occupational forces  (https://www.panafricanvisions.com/2018/life-war-zone-30-days-ambazoniaanglophone-cameroon-4/).  Their resistance is part of the greater project of making Ambazonia ungovernable. In this post I take a look at Ghost Town, a passive resistance method that was unthinkable just two years ago. This is framed within a context where the government and its gluttonous Anglophone elite have lost legitimacy at the grassroots in the Southern Cameroons.

After the police brutalized protesting lawyers and teachers in late 2016, there were calls, primarily on social media, for Anglophones to demonstrate solidarity with the protesters. Anti-Francophonization demonstrations on the streets had become dangerous – people were dragged in mud, others were shot, university girls were raped, some youths were arrested, etc. I can remember a Facebook group calling for people to stand with Anglophone teachers. It was within this context that Ghost Town emerged as a more practical and collective offline protest at the ways in which the Anglophones leaders were manhandled. By this passive resistance, it was meant no economic activity took place on a day that was designated for the Ghost Town. All businesses remained closed. By 2017, Monday had become the official Ghost Town day. It is now called contri Sunday (native Sunday). In addition to this, all official or national days are assigned Ghost Town status, meaning people in the Anglophone zone are not expected to participate in celebrating whatever is celebrated in Cameroun such as the Youth and National Days. Some of the Ghost Towns – particularly those referred to as mami wata Ghost Town – have been so tense that state employees simply do not turn up for work.

It was time for the government to gamble on another strategy that had hitherto worked in most instances. It sent Anglophone elite to act as mediators and quite a lot of them spoke of the need for the people to stop the passive resistance. But the government failed to know that these French Cameroun-based individuals have lost legitimacy among their people. Anglophones have been questioning the dishonest elite for a long time; they are perceived as thieves, as swindlers who do not account to the villagers what they do with investment money handed over to them by the government. This question is asked within a wider concern as to why the elite collaborate in the Francophonization of Ambazonia.

In any case, those who have failed to observe Ghost Towns have been treated unkindly; the shops, cars, motorbikes and schools (just to name a few) of defaulters have been torched by the population. And the government has not been able to do nothing about it. This aside, those elite that have sided with the government and those who have urged the villagers to denounce the passive resistance now find themselves in uncomfortable situation. Some of them have been told they are not welcome in their villages. And the youths delivering these bans have not spared those elite who ignore the injunctions. A few collaborators of the regime in power have been caught, stripped naked and humiliated. Unfortunately, some have been tortured. These are all recorded and shared on social media. Basically, these elites have been told that they can no longer speak for the people of Ambazonia. And it doesn’t bother the Francophone government that these tokenistic elites aren’t representing the people.

By and large, the militarization of Anglophone Cameroon has had as specific aim of protecting French and Francophone investments and system of oppression. This means the military is there to provide a secure environment for the French and Francophones to exploit resources in Southern Cameroons. The oppressed are by the military intimidation told their attempts to oppose oppression is futile in the face of heavily armed government troops. Now, come to think of Ghost Town operating in a militarized zone. La Republique du Cameroun conceives power mainly in terms of brute force and this would require that the police/military is physically present to enforce discipline. In this sense, citizens respond to authority only out of fear of physical or psychological injury that could be brought to bear on those who resist the Francophonization of Ambazonia. This is unlike in Ghost Towns where citizens respond to calls from physically-absent leaders, some of whom are only imaginary.

While in Bamenda in mid-April 2018, I realized that people observed Ghost Town more rigorously as compared to Buea. All businesses were closed, the streets were scanty and only a few transport services were operational within the city. I could not leave the city before evening because of the Ghost Town. On our way back to Buea that evening we passed through high security military control on the Anglophone site of the country.  The darkness was terrifying. We stopped, descended from the bus, showed our identity cards and then trekked for about 150 meters before getting back into the bus. The frightened military police had their guns pointed and were perhaps ready to shoot.

One would expect the government to be in total control in parts of the country that are militarized. And being in control here would entail among other things, guaranteeing the running of daily activities in a direction the government wishes. This could be either out of fear or respect. It could even be both. But the passive resistance in Ambazonia has proven that brute force does not necessarily make people to conform, fix or adjust themselves to an oppressive condition. The oppressor can use the gun to control people if s/he can find them, if the people are within spaces where the oppressor can control. But if the oppressor can’t access people within controllable spaces, the gun and its frightful sight, (powerful as it is), is just what it is: a potential object of repression.

When you are on the ground in Cameroon, you quickly realize that threats from the government, elite and local authorities are taken less seriously nowadays in the Anglophone region. Even after the government disconnected the internet and threatened to send to jail anyone posting information/images related to the war, Ambazonians still update the world about the ongoing war. Anglophones are by this passive resistance signaling that they are ready to use any means to fight oppression. To engage in Ghost Town would mean people are ready to sacrifice – willingly or by force – their present economic benefits in view of a better life in the future.

Lest anyone interpret this article as glorifying the suffering of the oppressed in a war zone; it is more about their resilience and courage in the face of a calamity!