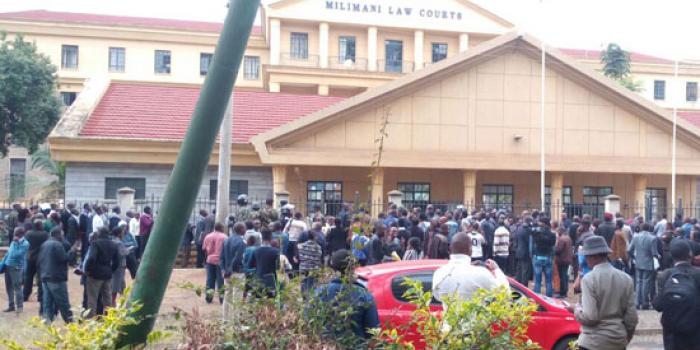 Activities in Kenyan Milimani Law Court was interrupted for few minutes on Tuesday morning after the court plunged into darkness during the hearing of bail application by Kenya Power and Lightening Company’s (KPLC) bosses, who were charged of corruption allegations.

The power firm said the outage was as a result of technical fault. The firm’s managing director Ken Tarus, his predecessor Ben Chumo and other nine senior managers at the utility company were nabbed on Friday, July 13, 2018 in connection with economic crimes following a directive from Director of Public Prosecution Noordin Haji.

The power officials are accused of procurement of faulty transformers and irregularities in pre-qualifying 525 companies for labour and transport contracts which led to a total loss of sh.470 million ($4700000). The CEO Ken Tarus and other eight mangers are alleged to have awarded transport and labour tenders to 33 companies which were not qualified and given some tenders more than once. Despite the irregularities the officials went ahead and paid them sh.160 million ($1600000) with a pending balance of sh.95 million ($950000).

Most of the companies used fake documents to apply for the tenders and 39 of the companies given the work were not registered at the time of application and pre-qualification,” Noordin Haji reiterated.

Alongside the firm’s bosses, the 33 directors and companies are also likely to face charges.  Muwa Trading Company Ltd agreed to supply the utility firm with transformers even though they do not manufacture them instead they shop from a manufacturer in In India, Nucon Switchgears PYT Limited.

Later Muwa Trading Company’s contract was terminated due to massive failures of the transformers and delay in delivery, a move which the directors James Njenga Mungai, Grace Wanjira Mungai and John Anthony Mungai protested. They sued Kenya Power for breach of contract; however, they agreed to settle the matter out of court.

According to Haji, Kenya Power accepted the default transformers without sending its engineers for a factory inspection in India and did not inspect them when they were received in the country.

Energy Cabinet Secretary Charles Keter criticized the manner in which the bosses were arrested. He bashed the police for invading the senior managers’ homesteads at midnight. Keter who confirmed his support on fight against graft termed the arrest as a mockery of the rules of natural justice. However, he appealed for calm assuring Kenyans that the activities in the power company will not be scuttled despite the arrest of the decision makers

“Let’s be human even in arresting people. You can’t go to someone’s house at midnight. Why can’t you call someone and ask them to report to a police station? If it is Charles Keter you want and can’t find him on phone, call my security or my wife and I will show up to face the law,” said Keter.

Those found guilty will be charged of abuse of office and willful failure to comply with procurement rules. Jared Omondi Otheno was appointed as the acting CEO.