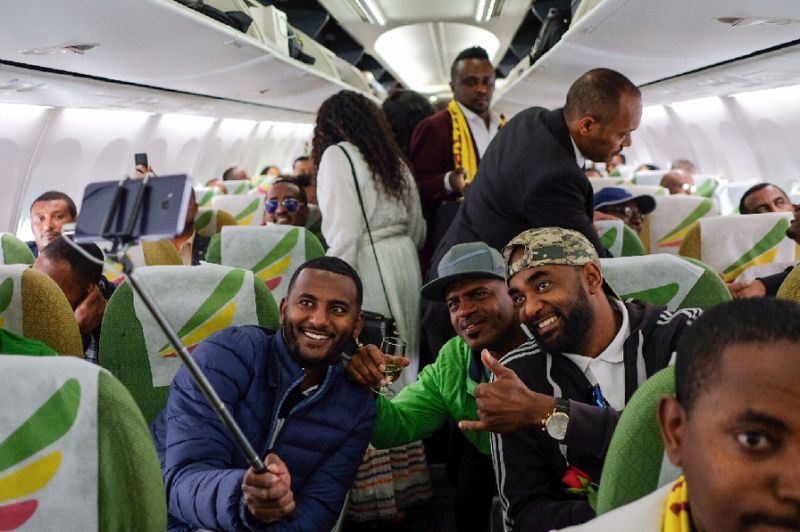 Asmara (Eritrea) (AFP) – Ethiopia and Eritrea on Wednesday resumed commercial airline flights for the first time in two decades, with emotions spilling over into the aisles and onto the tarmac as families were reunited.

Two flights left Addis Ababa within minutes of each other and an hour and a half later touched down in the Eritrean capital Asmara, in the latest phase of a whirlwind peace process between the former foes that began just six weeks ago.

An AFP journalist on one of the flights reported passengers singing and dancing in the aisles, overwhelming flight attendants, before falling into the arms of long-lost family members upon their arrival.

“I’m super excited. You have no idea,” said Izana Abraham, an Eritrean who was born in Addis Ababa — a fact that saw him deported from his home country during a bloody war between 1998 and 2000. “This is history in the making.”

Izana, 33, was going to visit his father. The two had been separated ever since his deportation until finally meeting in Dubai last year.

The airline wrote on Twitter shortly after take-off that “the bird of peace has just flown to Asmara.”

“This day marks a unique event in the history of Ethiopia and Eritrea,” the airline’s chief executive Tewolde GebreMariam said at a ceremony inaugurating the historic flight.

“The fact that we are taking two flights at a time shows the eagerness of the people,” said Tewolde.

Champagne was served to passengers in all classes, who toasted each other and posed for selfies during the flight.

Ethiopian Airlines, one of Africa’s fastest-growing carriers, has said it would initially operate a daily return flight between Addis Ababa and Asmara.

“With the demand we are witnessing, I think we’re going to increase the frequency to twice a day, thrice a day and even more,” said Tewolde.

He added the opening of Eritrean airspace to Ethiopian Airlines would also mean more efficient routes to the Middle East. 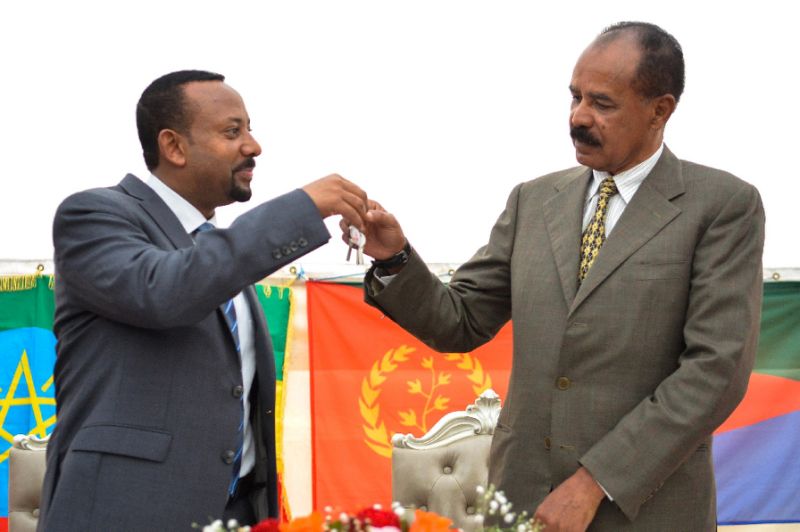 When the planes landed, passengers poured onto the tarmac where they danced together with a cheering crowd who welcomed them, waving the flags of the two nations.

Family members torn apart by the war sobbed as they were reunited.

“I am very excited. I can’t explain my feelings,” said Fasika Moges, who lived in Addis and met her sister Lula at the airport.

The pair had been separated since the war but, unlike many, Lula was able to afford a slow, indirect flight to Addis Ababa last year to visit.

Among the passengers on the first flight was former prime minister Hailemariam Desalegn, whose shock resignation in February was the first step in a series of seismic shifts in the politics of Ethiopia and the Horn of Africa.

“I knew one day it would happen,” Hailemariam said of the peace with Eritrea.

Hailemariam was succeeded in April by Prime Minister Abiy Ahmed, a 42-year-old former army officer and cabinet minister described by analysts as a “man in an extreme hurry”.

After announcing the liberalisation of parts of the Ethiopian economy and releasing jailed dissidents, Abiy last month declared his intention to make peace with Eritrea after two decades of frozen relations.

Eritrea was once part of Ethiopia and comprised its entire coastline on the Red Sea until it voted for independence in 1993 after decades of bloody conflict.

A row over the demarcation of the shared border triggered a brutal conflict that lasted between 1998 and 2000, leaving 80,000 people dead before evolving into a bitter cold war.

Abiy stunned observers with his announcement that he would finally accept a 2002 United Nations-backed border demarcation. However he has yet to announce a pull-out of troops.

He then paid a historic visit to Eritrea, during which he and President Isaias Afwerki declared an official end to the war. Afwerki reciprocated with a state visit to Ethiopia just days later.

The emotional reunion has been welcomed by Ethiopians who share strong cultural ties with Eritreans and have been cut-off from friends and family on the other side during the long years of enmity.

The rapprochement is expected to provide an economic boost to both nations, offering booming Ethiopia — which currently channels its trade through Djiboutian ports — access to Eritrea’s coast.

Amnesty International has said the new peace should be a catalyst for change in Eritrea, one of the world’s most isolated nations.

Since the end of the war, Isaias has used the threat of Ethiopian aggression to justify repressive policies, including an indefinite national service programme the UN has likened to slavery.