The Norwegian Ambassador to Nigeria, Mr. Jens-Petter Kjemprud, in this interview, outlines potentials for further cooperation between the two friendly countries

ABUJA, Nigeria, July 10, 2018,-/African Media Agency (AMA)/- As far back as 1890, Nigerians got exports of stock fish from Norway. This expanded to other sectors including shipping, ship building, oil and gas, renewable energy, making Nigeria Norway’s most important economic partner in Africa. The Norwegian Ambassador to Nigeria, Mr. Jens-Petter Kjemprud, in this interview, outlines potentials for further cooperation between the two friendly countries.
Daily Trust: How would you assess relations between Nigeria and Norway?

Ambassador Jens-Petter Kjemprud: I would describe it as very good. We opened an embassy in Nigeria at independence, but already had long trade relations dating back to the 1890s predominantly through stock fish exports. Trade, shipping, ship building, oil and gas, renewable energy are the main economic sectors, making Nigeria Norway’s most important economic partner in Africa with potentials for further growth. Political relations have become much closer in the past years with frequent meetings at political level and political visits both ways. The annual Nordic African foreign ministers meeting held once in Oslo and once in Abuja within the past three years is a good arena to discuss issues of common concern and the annual Nordic African Business Summit held every November in Oslo is an arena to develop further economic cooperation. We are also in the process of developing a bilateral political consultation mechanism and for two years now have had a very proactive Nigerian-Norwegian Chamber of Commerce based in Lagos.

DT: Norway hosted the humanitarian conference on Nigeria and the Lake Chad region. How would you assess the outcome?

Amb. Kjemprud: We are quite happy with the outcome. The two main ambitions of the conference which we hosted with the UN, Germany and the Nigerian government was to broaden international attention on the humanitarian needs in the Lake Chad region and secure solid funding to respond to the needs. Both ambitions were achieved. We are now in the process of planning for “Oslo 2” conference in cooperation with the UN and Germany, to be held in Berlin. We follow closely the government’s efforts to alleviate the humanitarian crisis which affects up to seven million people and urge the Nigerian government to cooperate fully in preparation for the new conference. Such a conference should go beyond the humanitarian funding to bridge the gap towards development, peace and stability and supplement necessary peace initiatives for the Northeast. There is no military or humanitarian solution alone.

DT: Have other projects been initiated since then?

Amb. Kjemprud: The government, UN, national and international NGOs have all responded to the humanitarian crisis, specifically the Northeast of Nigeria and Borno State in particular, as this is the epicenter of the conflict and the humanitarian crisis. The UN in particular has strengthened its presence but the pledges and commitments to the humanitarian response plan for 2018 is relatively weak, hence the need for “Oslo 2”. Norway upgraded its response through the UN, national and international NGOs in 2017 to approximately $35m. The Norwegian Refugee Council has also established a solid presence to support refugees and internally displaced persons.

DT: Having been in Nigeria for some time, how will you describe your stay?

Amb. Kjemprud: I am enjoying my stay, coming to two years, very much. Nigeria has a deep reservoir of brilliant, well educated, innovative and bright people, many of whom I have had the privilege to meet. But also, as I had the opportunity to discuss when I visited the National Institute for Policy and Strategic Studies (NIPSS) in Kuru, there is a gap between all those brilliant people and the way the country is organized. That continues to puzzle me and should pose a challenge to the politicians of this great country.

DT: How is the bilateral trade tie between Nigeria and Norway?

Amb. Kjemprud: As I said, the trade volume is good, with the bulk concentrated in shipping, ship building and oil and gas sectors. I still feel there is much untapped potential and we try to promote further trade including through special efforts to remove wrong perceptions of the Nigerian market. There is still an inclination among many business people not to engage in the Nigerian market because of the bad reputation. We thus support the Buhari government’s fight against corruption and we cooperate to urge our companies to avoid corruption. We are pleased with the improvement in Nigeria’s ranking on the ease of doing business, but still see the energy sector as an important impediment to foreign investment in Nigeria. The manufacturing sector cannot be competitive without safe, cheap and stable power supply. If Nigeria succeeds in improving the fight against corruption, the ease of doing business and puts it energy sector in order, you will see a new, more prosperous Nigeria which could also respond better to the needs of the fast growing population, thereby reducing conflicts caused by competition for scarce resources. These are the issues politicians should be judged by.

DT: The Nigerian government has called on Norway to invest in the seafood sub-sector in Nigeria, do you see this working?

Amb. Kjemprud: Trade between the two countries is imbalanced in our favour indeed, mostly due to the fact that we are both oil producing countries. We do however think that this might change. Today, the surplus in trade is mostly due to Norwegian technology inputs into the Nigerian oil sector. As the Nigerian local content policy develops, we can envisage changes in the near future. The Norwegian branch of TechnipFMC recently produced manifolds for the oil sector with 80% local content and a Lagos-based company, Marine Platforms, won a local content award this year for acquiring high technology ships for Nigeria’s subsea offshore industry from Norway. As for the seafood sector we believe and have offered assistance in developing aquaculture in Nigeria. The domestic supply only covers one-third of the demand for fish, so there is an enormous potential to develop the sector on land and at sea. Norway has the expertise as the seafood sector is our third biggest export sector. We would be happy to share our experiences. The Nigerian- Norwegian Chamber of Commerce is focusing on this and we will have a seafood/fisheries week in Lagos this October in cooperation with the Norwegian Seafood Council.

DT: You once expressed Norway’s readiness to collaborate with Nigeria on the film industry. How far has this gone?

DT: What would you want to tell Nigerians about Norway?

Amb. Kjemprud: Maybe two things: First, we have deliberately used only a small part of our oil income to fund running costs and extraordinary investments, and as a result, now have the biggest sovereign wealth fund in the world, which is established to secure the welfare of future Norwegian generations. It’s all based on the principle of saving on good days for bad days. Secondly, women’s rights and equal access to work is probably the biggest contributor to the wealth of the nation, and happiness of all people in Norway (if happiness can be measured). 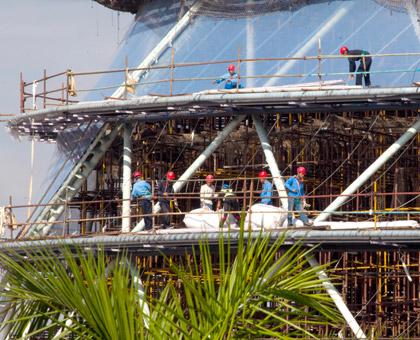