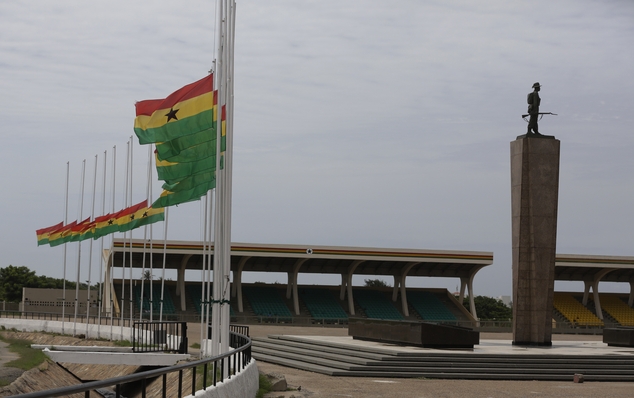 President of the Republic of Ghana Nana Addo Danquah Akufo-Addo has directed that flags throughout the country fly at half-mast for the next five days in honour of the late former Vice President of West African country, Paa Kwesi Bekoe Amissah-Arthur.

Additionally, the President said the late Vice President will be given a full state burial.

Addressing a twenty-member delegation led by brother of the late Vice President, Jabesh Amissah Arthur, at the Jubilee House, President Akufo-Addo said even though the late former Governor of the Central Bank’s wish was to have a very simple and brief ceremony by way of a funeral after his passing, he is owned by the state having served as Vice President of the country.

The President beseeched the family in the deliberations to make room for the state to pay its full respect to the late former Vice President describing him as “vibrant personality in our national life who still had so much in him to give to Ghana but…the ways of the Almighty are not our ways.”

According to President Akufo-Addo, the reception of the news of the death of the former Vice President “is a testament to how the generality of Ghanaians felt about the man. Across the political divide and different aspect of our society, everybody has been touched by his passing.”

In his address on behalf of the family, Jabesh Amissah Arthur, said the family together with State Protocol officials have had very fruitful discussions on the proposed State funeral for the late former President.

To that end, as part of the funeral process, the family will hold a church service on Friday the 6th of July 2018, to observe one week of his passing.

He disclosed that at the one week celebration, the family will announce all the plans for the final funeral rites of the late former Vice President.

The former Vice President, Amissah-Arthur, reportedly collapsed at the Air Force Gym, in the early hours of Friday the 26th of June 2018. He was rushed to the 37 Military Hospital where he was later pronounced dead.

According to eyewitnesses, the ailing vice president was conveyed to the 37th Military Hospital in a pickup vehicle because there was no ambulance, rekindling the old-age discussion on inadequate ambulances in the country.

President Akufo-Addo’s directive comes in the wake of criticism of him by the Minority for not declaring a national day of mourning following the untimely demise of former vice President last Friday.

Member of Parliament (MP) for Adaklu, Kwame Agbodza earlier argued that the government’s failure to declare even a day of mourning for the late Central Bank Governor speaks to how unconcerned the Akufo-Addo administration is about his death.

“I am completely shocked that the President of the Republic of Ghana doesn’t find it fitting to declare even an hour of mourning for the demise of the former vice President. It is uncharacteristic of our President. Every other President or somebody of that stature that has passed got a better dignity from the sitting President. Vice President Amissah-Authur didn’t get that,” he stated.