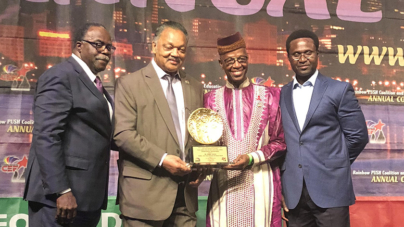 NEW YORK CITY, N.Y., Dr. Djibril Diallo, President and Chief Executive Officer of African Renaissance and Diaspora Network, Inc. (ARDN) was named the recipient of Rainbow PUSH Coalition’s 2018 International Humanitarian Award. Dr. Diallo received the award on Friday, June 15 from Reverend Jesse L. Jackson Sr., the founder of Rainbow PUSH, during the 47th Annual Rainbow PUSH International Convention in Chicago, Illinois, in recognition of his steadfast and outstanding global leadership in making humanity’s common home a better place, through his over three decades of service in the United Nations, and his leadership of ARDN’s “Pathway to Solutions” international initiative.

“It is an honor and privilege to have received the 2018 International Humanitarian Award for my service at the United Nations,” said Dr. Diallo. “This is especially significant as ARDN is now spearheading the ‘Pathway to Solutions,’ which is a special project for the United Nations to popularize the Sustainable Development Goals, and ensure that the vulnerable are uplifted and no one is left behind.”

“Djibril’s tireless and outstanding global leadership continues to make our global village a better place for all,” said Reverend Jackson. “We appreciate his commitment to serve and thus save humanity.”

“Djibril’s receipt of this prestigious award is well deserved,” said Ms. Constance B. Newman, the Chair of ARDN’s Board of Directors. “It is a testament to the vision and force for good that the United Nations has been for the world.”

About the African Renaissance and Diaspora Network (ARDN)

The African Renaissance and Diaspora Network, Inc. (ARDN), is an internationally operating NGO headquartered in New York, with the status of a United States 501(c)(3) public charity. ARDN’s mission is to accelerate the attainment of the African renaissance by advocating for and supporting United Nations programs, such as the Sustainable Development Goals. To this end, ARDN mobilizes the passion of government, educators, artists, intellectuals, the private sector, civil society and youth, using the power of art, sport and culture as vectors for creating a better world. ARDN serves as the Secretariat or the Global Alliance of Mayors and Leaders from Africa and of African Descent. ARDN is chaired by Constance B. Newman, a Senior Fellow at the Atlantic Council’s Africa Center, who has formerly served as Assistant Administrator to the United States Agency for International Development and as United States Assistant Secretary of State for African Affairs.

The Rainbow PUSH Coalition (RPC) is a multi-racial, multi-issue, progressive, international membership organization fighting for social change, with headquarters in Chicago. RPC was formed in December 1996 by Reverend Jesse L. Jackson, Sr. through the merging of two organizations he founded earlier, People United to Serve Humanity (PUSH, 1971) and the Rainbow Coalition (1984). RPC works to make the American Dream a reality for all citizens and to advocate for peace and justice around the world.

RPC is dedicated to improving the lives of all people by serving as a voice for the voiceless.