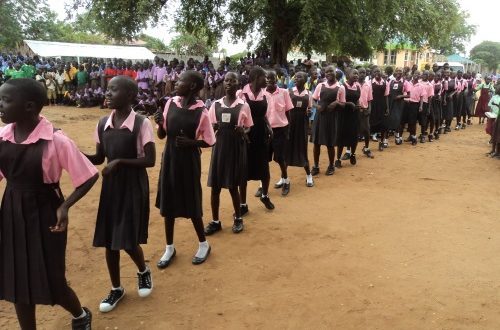 Juba – a new latest report says up to 2.4 million children in South Sudan are not receiving an education, the highest proportion of out of school children in the world.

This was attributed to the years of conflict, resulted to mass displacement and economic collapse continue to deprive children of education, harming the future of the country.

In the statement,  new data in the Global Initiative on Out of School Children South Sudan Country Study estimates that up to 2.4 million children are not attending school in South Sudan.

It added in just [next] two years the number of children not in school will increase by a further 200,000, to 2.6 million, if conditions in the country do not significantly improve, the study warns.

“We cannot leave children behind.  They are the future of South Sudan,” said Sardar Umar Alam, UNESCO’s Representative to South Sudan.  “We must work together – everyone including the government, civil society and development partners – to urgently support and invest in teachers and getting children into schools,” Umar added.

The study mapped major barriers and challenges keeping children from going to school as displacement, recruitment by armed forces and groups, poverty, and child labor were cited as major risks to children’s education.

It calls for greater investments in collecting education data to allow for evidence-based activities while stressing the importance of functional schools with clean water, books, trained teachers and a safe learning environment free from conflict.

“Investing in education is not only the right thing to do, it is the smart thing to do,” said Mahimbo Mdoe, UNICEF’s Representative in South Sudan.  “Educated children are able to build a better future for themselves, and the country.”

The study was conducted by Global Initiative on Out-of-School Children South Sudan Country in collaboration between UNESCO,Ministry of General Education and Instruction (MoGEI), National Bureau of Statistics (NBS) and development partners with support from UNICEF and the Global Partnership for Education.

South Sudan has descended to civil war in 2013 over power and resources control between president Kiir and opposition leader Dr. Machar, just two years of her independence from Sudan, a conflict in its fifth years has killed tens thousands of people and displaced four million people from their homes

Africa: Open for Business! Canada to host The Commonwealth Africa Forum in July 2018

Nigeria’s Buhari seen in public for first time in weeks