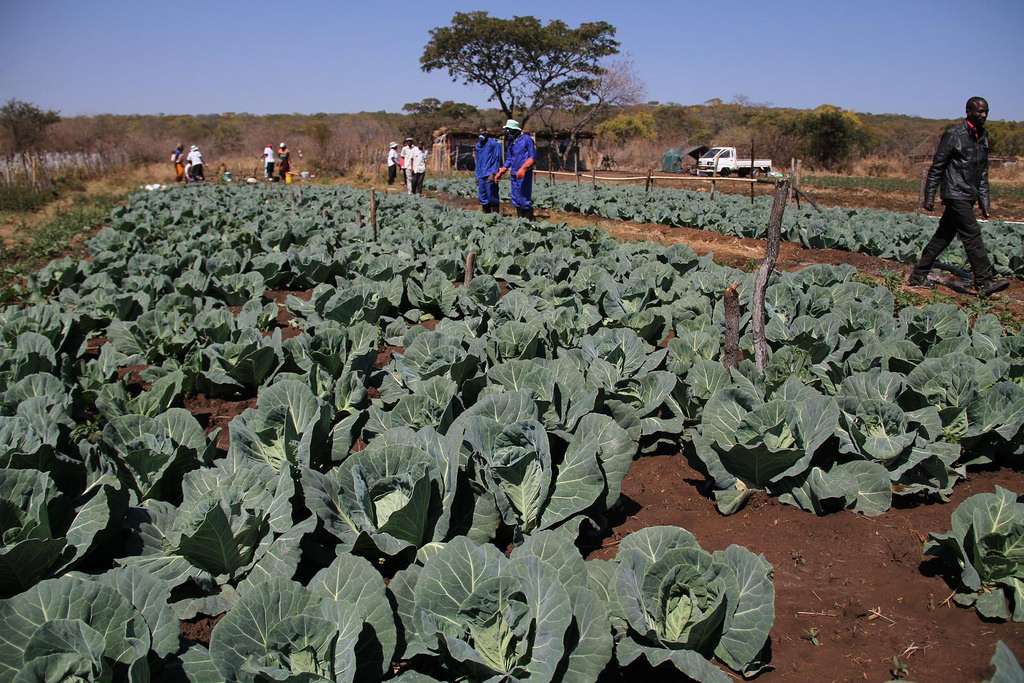 The WORLD with a total population of 7,5 billion people , 1/3 percent of food is wasted . This constitutes of 7 million tons , with total cost  of  2,6 trillion a year , 700 billion environmental costs and 900 billion social costs and 795 million people undernourished .  Most of the affected are the developing countries, among them Zimbabwe hard hit by economic hardships and impacted by climate change  . In terms of food losses and wastages , its accountability begins at its largest horticulture market .

Mbare , Zimbabwe’s largest horticultural market receives 80% of commodities a day .These sundry food stuffs are in form of field crops , cereals , legumes , pulses , fruits and all types of horticultural produce from around the country’s 56 districts . Tomatoes pour on daily basis, 1000 tons a day , potatoes 800 tons , cabbage 400 tons and fruits 150 tons .Some of these come from neighboring countries in the SADC Region especially South Africa .

Because of logistics related to mismanagement in food handling, lack of horticulture policies and lack of refrigeration especially during the summer season, most of the produce from  farms ends up wasted. A Horticulture Expert, an Economist by profession who runs an organization in Agricultural management systems called Knowledge Transfer Africa  , Charles Dhewa who is the Chief Executive Officer said at least one-eighth of the precious farm produce is lost and wasted daily .The produce is also imported and some exported to countries in the region which share the same challenge at home .

‘’At least one eighth of this precious produce is lost and wasted daily. This starts right straight from the farms . Because of poor transport logistics, lack of refrigerated vehicles and distance from the market ,this figure is reached at through underestimation, but this could be more since some losses and wastages are not recorded. Some produce comes from neighboring countries where losses and wastages occur as well .

‘’ Among these wastages, tomatoes are more at loss because of their perishability owing special attention to their cultivar nature. Horticultural produce, most in number need adequate refrigeration and closeness to markets .There-fore refrigeration technology is by no doubt not to be ignored. There is also the need of accessibility to highways linking cities and to some towns and markets where produce is taken.

‘’Therefore, factors related to perishability , accessibility and inefficient markets must be considered as first priority.  Economic factors related to over-supply when demand is high and price elasticity advantage the farmer , however , they are pulled down by lack of inputs due to economic hardships . This leads to Agricultural drought’’ , expounded the Expert .

This alone compromises on low quality food commodities without refrigeration .The Expert dwelling on this point gesticulated that climate change blow arising from global warming is more of an impact causing food losses and wastages which strain more , hard hitting farmers on the ground .The expert further on dealt on the issue of Climate Change which he said is becoming pervasive in the wastage of food in the SADC as well .

‘’These factors leads to strong losses and wastages which throw farmers out of business. Some farmers end up failing to cope up with such challenges .They give up this trade at the same time malnourishing families. This is  the only time wastage of food goes down .Families become very economic during hard times and splash out after a bumper harvest , he took a pose .

However , caution is always practiced by both farmers and buyers in the market but what pulls everything down are marketing and economic unbeatable circumstances . Also there is lack of co-ordinated supply, lack of proper communication and punctual timing at a time farmers are supposed to have a win-win situation . Research in SADC urban communities reveal more on food wastage as explored by another Expert , Maxwell Phiri , Co-ordinator with the Food And Agriculture Organization in Zimbabwe who said  developing countries are more at loss because of some other reasons related to climate change  .

‘’This leads to loss of quality of commodities because of excessive heat especially during the hot season. There is also loss in income as farmers lose much that could make them prosper on as business flourishes. Climate Change is leading to more losses and wastages as temperatures change , market forces pull down and economic factors drag these farmers down to losses in finance meant for family food consumption and money for the next harvest .Communication systems need to be improved so as to link with farmers in time ,  to educate , sensitize and bring strong advocacy to them , he emphasised .

Taking sides , pouncing more on losses , a Marketer and Accountant with the Agriculture Marketing Authority of Zimbabwe sneaked in the discussion .

‘’With Low, low prices , this is a big problem faced by  farmers as they get and proceed on with the business . Sometimes, farmers spend days along the way and more days at the market . They end up losing commodities, falling out of their pockets, coming across as well massive over-head expenses before they are even done with their business, expounded in anger Jonas Jonera as he joined in the interview  .

Jones  a Commodities control personnel , Marketer and Accountant  elaborated that most farmers, because of low education and commodity marketing knowledge  face  problems of ‘’unpredictable supply , liquidity issues and end  up duped by eco-cash unscrupulous agents who charge 20% for cash out .

‘ ’Farmers want to be paid in cash but , alas , cash is hard to come by , so  these buyers end up buying using eco-cash at the expense of farmers who want to travel back home , buy what they want is to carry back money home .Along the way to and from they waste , lose and gain little , nothing  at times . This does not motivate our farmers . Secondly , Policies of the Government are at most putting farmers at risk , thereby walking out of business , leaving everything rotting to intensive wastage and losses ‘’ , he said .

One of the prominent traders, Mercy Munemo from Mtoko pointed out that most commodities especially those perishable get wasted and lost because of damages along dirty , dusty roads , gullied roads in rural areas . Commodities sometimes spend 2 to 3 days stored in piled crates handled with less care  which make them break down leading to most perishables thrown into bins at the market .

‘’We come across many problems and challenges especially in the market, ‘’makoronyera [Low Price buyers ] , always want to pay in very low , chicken –feed prices . They preach to you all forms of changing economics ranging from prices , over-supply , less demand and low business . We end up sometimes throwing in bins all the remaining rotten and emaciated commodities which they say are of low and poor quality, We are pulled down by lack of knowledge , poor facilities , transport costs and Government lack of policies to restore order at markets ,she said .

A house wife , Naume Chiutsi who was in chagrin as she had no choice but had to take back home partly rotten tomatoes and potatoes because she had no cash but eco-cash complained of bad quality commodities .

‘’ We always waste a lot because after two to three days , we end up throwing away what we buy at what they claim is cheap yet its not that way . These commodities spend days along their way to Harare . Here in Harare , they spend days without refrigeration and at home still many families get  interrupted electricity supply and some do not have cooling systems , she complained .

Getting back into the circle of the interview, the expert Charles Dhewa said there is need for policies to be put in place by the Government to control the movement of commodities right straight from the farms. Most  of the commodities are carried by buses . Most of them delay and sometimes get break-down along the way , leading to losses and wastage of these commodities .

‘’.We call the Agriculture Marketing Authority [AMA] to advocate for policies at national level which focus on commodity transportation from the farms into the city markets . The policy must recommend refrigerated vehicles only to carry such products and prohibit buses and some small vehicles .

‘’More research comes with information related to new developments in the farming rural communities which need to develop Agro-based industries with green houses and refrigeration cold rooms for food storage  before it reaches the towns and cities markets . Still  Charles had another comment before leaving the stage .

‘’Wastage will always be there since all the big markets have no refrigeration systems . This is a big problem  . If we are to have refrigeration , we need cold rooms which accommodates tons of commodities . Still most farmers wont be able to pay for storage and security . Point two is the Government lacks finance to drive forward the systems . Lastly , donor funding is not found in this area since it might be unnecessary at times’’ .

The expert expanded that the need for technology was so important so that such problems related to refrigeration could be cushioned .He pointed out that the environment of the market is always dirty especially during rain season .That , he added as another problem  at these markets . Because of this , at last most of the garbage of wasted food is taken to Pomona .

‘’Some wasted food is taken to Pomona and some of it is bought by pig farmers who buy it at low cost or get it for free .We need to work on policies on food containerization and refrigeration . Secondly, it is vital to train farmers on food handling management to avoid wastage. Thirdly, those in the market, need training so that they remain vigilant on issues related to this .

‘’Although there is a biogas to generate energy using food wasted, there is need of a bigger one , a modern one , though the one there is of good size , the wastage of fruits , vegetables and all that is waste is so little . More wastage is needed to capacitate the generation of bio-gas energy,’’ he concluded.

Taking a squint at this Journalist , An Expert in the field of energy Tendai Marowa of Comprehensive Energy Solutions , said there is need for more than excessive production of food , maybe unmanaged waste can be increased to capacitate the generation of the bio-gas , however , this , he said cannot be  for Harare alone to supply the bio-gas . There is need for the Government to implement policies on food collection in the cities and towns so as to sustain the bio-gas project throughout the country as stated in the Energy policy .

‘’It is therefore vital for the Government to support policies on Industrialization development in rural and farming communities. However, more policies on energy development work where such developments rise . Thus only when wastages of food can come to an end’’ , he said .

The escalating problem is also found in some countries in the SADC region. However, without knowledge on policy issues at ground , the challenge hangs in air . For there to be effective Technology, always there is need to develop policies at Regional and national level .