Refugees, Ugandans join hands to save the Environment 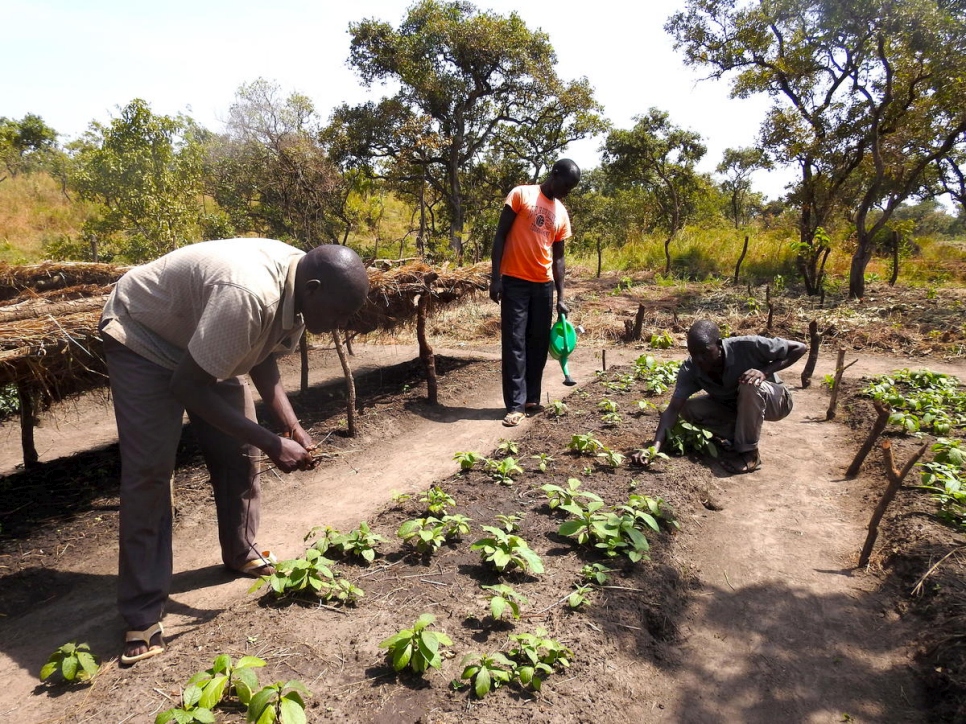 Some of the locals working with the Refugees in Nyumagi Refugees Settlement,Adjumani.PHOTO BY PAUL NIGHT

ADJUMANI-Uganda – Under a searing midday sun, Robert Onyaya 36 wipes his brow as he bends to water a bed of tiny green neem seedlings in the fertile soil of a tree nursery in Nyumagi refugee settlement, Adjumani district in northern Uganda. “We are growing these indigenous seedlings to help bring back all the trees that were cut down to make way for us, when we came here,” he says.

He fled fighting in neighboring South Sudan, with his two wives and eight children. When they crossed the border into Uganda, the family was transferred to Palabek, where they were given their own plot of land. UNHCR, the UN Refugee Agency, has provided Onyaya and 11,000 other South Sudanese refugees who live in the settlement with food, mats and household items. They have also received tools to build shelters and seedlings to grow tree borders around their plots.

Uganda is now sheltering some 1.4 million refugees, most of them from South Sudan. That number is expected to grow in 2018, and so, too, is concern over the impact such a large number is having on the environment. In the past 20 years, Uganda has lost one third of its forest and green cover due to tree cutting by the local population, for farming and cooking fuel. In the Adjumani district alone, local officials estimate that 11 million trees have been felled since December 2013 to make way for settlements to house refugees.

“Instead of rehabilitating the environment after refugees return home, we need to prevent the damage being done at the very beginning of the emergency phase,” says Mr Paul Manga, the Ugandan government’s environment officer. “The influx of refugees is being viewed as having a negative impact on the environment. But, we believe refugees can be a driving force for environmental protection and conservation if they are involved in the campaign to protect the environment from the moment they arrive.”

In line with the New York Declaration adopted by 193 UN Member States in September 2016, the Ugandan government is taking a comprehensive approach to the refugee situation in the country. It is working with UNHCR and its partners in the private sector to raise awareness and change energy practices. This means exploring more sustainable use of wood for shelter, cooking and lighting, in settlements and the surrounding host communities which have donated land to refugees.

“We need an urgent and immediate response to limit the massive destruction of the environment in Uganda,” says Mohamed Abdel-Al, UNHCR’s senior technical coordinator. “We are rolling out a new energy and environment strategy in 2018, where we aim to provide every refugee family with an energy efficient stove to reduce their dependency on wood and charcoal. To help rebuild forests, we are investing in tree planting and tree marking, and creating tree nurseries to provide seedlings to refugees and the host community.”

In Nyumagi, UNHCR partner the Lutheran World Federation (LWF) is taking a holistic approach, hiring refugees to plant trees throughout the settlement and mark others with red paint to show they should not be cut down. The Lutheran World Federation ( LWF)  is also employing refugees and members of the host community to manage tree nurseries inside and outside the settlement. Inside Nyumagi, Onyaya and 10 other refugees have received training in how to plant seedlings to re-establish tree species, such as neem and teak. “Once the seedlings are ready for sale, these men will have gained a skill they can make a living from,” says Mr Kennedy Orach, LWF livelihood and environment officer.

Ms Agnes Alur, 24, who arrived in Nyumagi refugee Settlement April, 2016 with her two small sons, received a free energy saving stove. “This stove is better than the traditional three stone stove, as I don’t need as much wood and can cook food, like peas, beans and fish, much faster,” she says.

The introduction of solar energy to replace firewood for lighting is also helping to keep girls and women safe. UNHCR, with the help of partners, is providing refugees with solar lamps on arrival. Solar street lights are also being installed on roads and at water collection sites.

The main purpose of UNHCR’s environment strategy is to meet the needs of refugees, while protecting Uganda’s environment in a strategic and sustainable way in 2018, UNHCR hopes to plant 1.4 million trees to represent each refugee in the country. This depends on overall funding for the refugee response in Uganda, which is critically low at just 37 per cent in 2017.

Meanwhile, Mr Robert Onyaya and his team are making their mark in Palabek, working to rebuild the forests of Uganda. When the day comes when he can return home to South Sudan, he is ready. “I will use the skills I learned here to start a tree nursery in my own village, so I can rebuild my life and the life of my family.