*issues 12-point resolution on state of the nation

The joint Assembly of the Federal Republic of Nigeria has drawn the battle line with President Muhammadu Buhari as it, yesterday, charged him to address threats to the lives of the citizenry and the country’s democracy, failing which it would initiate constitutional actions against him.

The impeachment of the president was, implicit in the latest face-off between the two arms of government.

The National Assembly vowed to press the international community to help secure the country’s democracy which the legislature said is now at risk. The legislators summarised the risks to the lives of Nigerians and the country’s democracy in what they alleged as the incompetence of the Police and the Inspector-General of Police, Ibrahim Idris. In its resolution, the National Assembly reiterated its vote of no confidence in Idris as earlier passed by the Senate. The Assembly at the same time passed a unanimous vote of confidence in its leadership. Senior officers of the administration and Buhari’s top 2019 presidential campaign officials drew back from joining the fray when contacted yesterday.

There were, however, mixed reactions from the civil society community, with President Buhari’s former lawyer, Chief Mike Ahamba, SAN, calling on the President to urgently deal with the issues addressed to him. Unusual joint session of NASS The resolution of the National Assembly came at the end of an unprecedented joint session of the Senate and the House of Representatives in the chamber of the House of Representatives. It was the first time the National Assembly would sit in a joint session on matters besides receiving the budget or a foreign dignitary since the return to democratic rule in 1999. Yesterday’s three-hour closed session commenced at 12.35 p.m. and ended at 3.35 p.m, following which Senate President, Bukola Saraki, who presided at the session read out the resolution which was agreed. With Speaker Dogara seated beside him, Senator Saraki said: “The National Assembly held a joint Executive Session today, Tuesday, June 5, 2018 (yesterday), where lawmakers agreed on 12 resolutions as follows: lThe Security Agencies must be given marching orders to curtail the sustained killings of Nigerians across the country and protect lives and properties of Nigerians as this is the primary duty of any responsible government. lThe systematic harassment and humiliation by the Executive of perceived political opponents, people with contrary opinions including Legislators and Judiciary by the police and other security agencies must stop. lThere must be strict adherence to the Rule of Law and protection for all citizens by the President and his appointees. lThe President must be held accountable for the actions of his appointees and must be ready to sanction those that carry out any act which will ridicule or endanger our country and democracy. lThe government should show sincerity in the fight against corruption by not being selective and also prosecute current appointees that have cases pending against them. lThe sanctity of the National Assembly should be protected and preserved by the Federal Government of Nigeria by not interfering in its business and prosecuting those who invaded the Senate to seize the Mace.

National Assembly should liaise with International Communities through the IPU, APU, ECOWAS, CPA, Pan African Parliament, EU, UN, US Congress and UK Parliament to secure our democracy. lDemocratic elections must be competitive and inclusive by removing the present reign of fear and intimidation particularly as we approach the forthcoming 2019 elections.

The National Assembly will work closely with Civil Society Organisations, Trade Unions and NGOs to further deepen and protect our democracy. The President must take immediate steps to contain the growing level of unemployment and poverty in Nigeria especially now that we have advantage of the oil price having risen to $80 per barrel. lBoth chambers of the National Assembly hereby pass a vote of confidence on the Senate President and the Speaker of the House of Representatives and the entire leadership of the National Assembly. lWe reaffirm our earlier resolution of vote of no confidence on the Inspector- General of Police who does nothing other than preside over the killing of innocent Nigerians and consistent framing up of perceived political opponents of the President and outright disregard for constitutional authority, both executive and legislative. Finally, the National Assembly will not hesitate to invoke its Constitutional powers if nothing is done to address the above resolutions passed today (yesterday).’’ 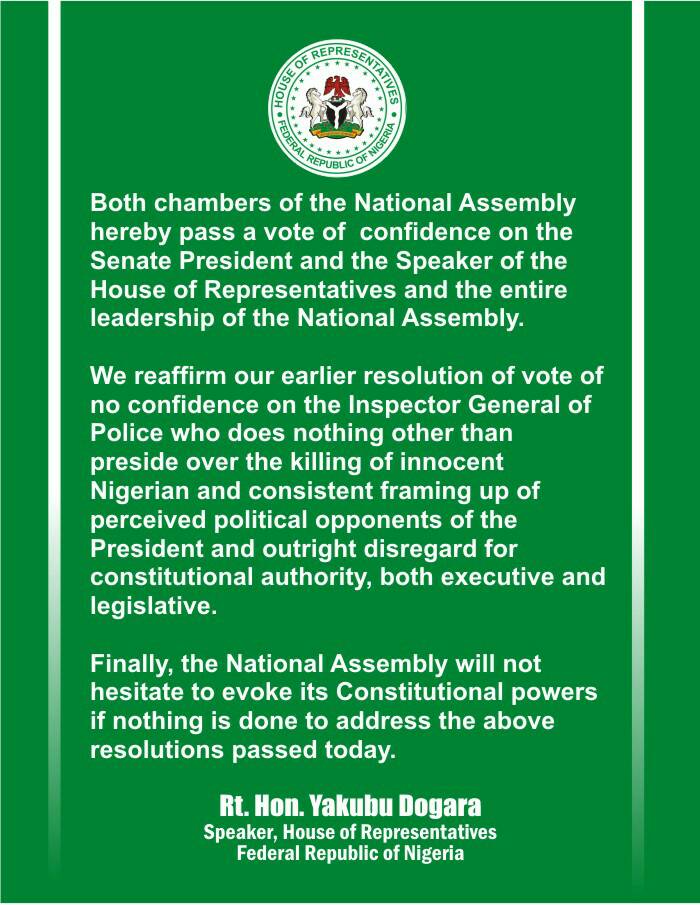 Address the issues — Ahamba Responding to the National Assembly resolution,

Ahamba urged the President to look at the issues raised by the legislators, even if they were not innocent in the handling of the problems of the country. He said: “They (lawmakers) have power under the constitution to pass resolutions, but those resolutions are not binding on the president. “Everybody in Nigeria knows that democracy is in danger. Strictly speaking, they cannot run away from the fact that they are part of endangering democracy by their conduct, but if they have passed a resolution touching on the presidency, I expect the President to look at it and decide to implement or not. “I haven’t seen their resolutions and the reasons for them, but they have endangered democracy because of some of the legislation they have passed like the Administration of Criminal Justice Act, ACJA. “There are some sections in that Act that are incongruent with the rule of law and which the security agencies are using to humiliate Nigerians.”

The resolution at the joint session was, however, last night debunked by a member of the House of Representatives, Abdulmumin Jibrin who recently returned to the House after suspension. Jibrin, who claimed to be speaking on behalf of the Parliamentary Support Group for Buhari, alleged that the resolution was conceived by legislators of the Peoples Democratic Party, PDP extraction. He said: “Almost all the senators that spoke at the Executive Session are of the PDP, while members of the APC declined joining the discussion to avoid a rowdy confrontation as the entire session could easily pass for a PDP Executive Session. “It is commendable that the Speaker tactically refused to make any comment at the session even after the Senate President took time to explain the issues which are mostly personal. “It is disturbing and raised many questions of pre-determined intentions that a known ally of the Senate President from Kwara State, Hon Rasak Atunwa drafted what was adopted as the resolution and without voting, against standard parliamentary practice. “Most of the issues raised concerning the fight against corruption, insecurity and the rule of law have been severally discussed in the Senate and the House and various resolutions passed. “We commend the efforts of Mr President in the fight against corruption, tackling of the insecurity challenges and respect for rule of law and democratic institutions. Mr President is known for his non-interference policy. 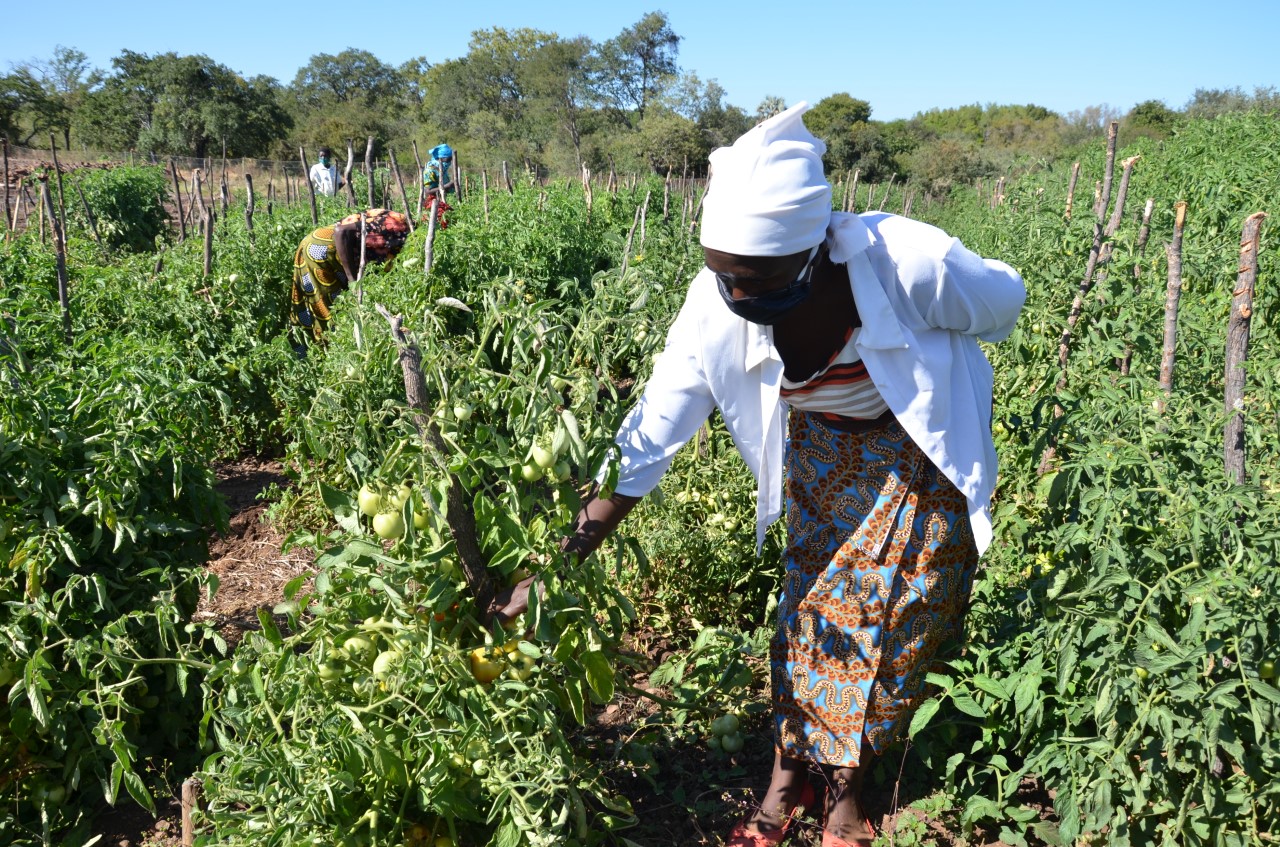 How The Back-To-School Debate Can Make Or Break The U.S. Economy