The United States Government proudly collaborates with the Government of Malawi, the private sector, philanthropic organizations, multilateral institutions, civil society and faith-based organizations, people living with HIV, and many others to achieve results

LILONGWE, Malawi, June 1, 2018,-/African Media Agency (AMA)/- This year marks the 15th anniversary of the U.S. President’s Emergency Plan for AIDS Relief (PEPFAR). President George W. Bush signed PEPFAR into law on May 27, 2003. Over the past 15 years, the U.S. Government, through PEPFAR, has saved and improved millions of lives and completely transformed the global HIV/AIDS response. Thanks to the generosity of the American people, 13 high HIV-burden countries are poised to accelerate epidemic control by 2020 – including Malawi. This is an outstanding moment for Malawi – making the country a leader in its HIV response yet again – but we’re not quite there yet and we cannot let up in our efforts.

When PEPFAR began, only 50,000 people in Africa were on lifesaving HIV treatment. PEPFAR currently supports more than 13.3 million people on HIV treatment globally. More than 2.2 million babies have been born HIV free to HIV-positive women. Worldwide, PEPFAR provides care and support to more than 6.4 million orphans, vulnerable children, and their caregivers. With PEPFAR as a leading element of global support, AIDS-related deaths have declined by nearly 50 percent globally since their peak in 2005. With bipartisan support from the U.S. Congress, the U.S. Government has invested more than $75 billion in the global HIV/AIDS response, with the vast majority of that money invested in Africa. PEPFAR focuses its efforts on where the HIV/AIDS epidemic is the greatest, need is highest, and dollars used most efficiently.

Over the last 15 years PEPFAR has invested nearly $700 million to support the HIV/AIDS response in Malawi. In Malawi, because of the generosity of the American people, PEPFAR currently supports lifesaving antiretroviral therapy (ART) for over 700,000 people. Last year alone, PEPFAR provided voluntary medical male circumcision for 98,532 men, allowed 40,428 pregnant women to receive HIV testing and counseling, and enabled 164,558 orphans, vulnerable children, and their caregivers to receive care and support in Malawi.

In partnership with Malawi’s Ministry of Health, Department of HIV/AIDS, and the National AIDS Commission (NAC), PEPFAR has implemented several innovative strategies to combat the disease. For example, PEPFAR is working to reduce the vulnerability in adolescent girls and young women through DREAMS (Determined, Resilient, Empowered, AIDS-free, Mentored, and Safe) programming. Within DREAMS program areas, we have witnessed a 53% reduction in new HIV diagnoses among 15-19 year-old adolescent girls and an estimated 30% reduction in new HIV diagnoses among 20-24 year-olds. Reducing new HIV infections among adolescent girls and young women in Malawi will be key to achieving epidemic control.

PEPFAR is Bringing us Closer than Ever to Ending AIDS…

Malawi, with PEPFAR as a key partner, is on its way to achieving control of the HIV/AIDS epidemic by the end of 2020. For the first time in modern history, we have the opportunity to control a pandemic without a vaccine or a cure, while also laying the groundwork for eventually eliminating HIV transmission. In Malawi and around the world, what once seemed impossible is now possible. But our work is far from done. Through transparency, accountability, and the power of partnership, we can accelerate progress toward reaching our shared goals.

Distributed by African Media Agency (AMA) on behalf of U.S. Embassy in Malawi. 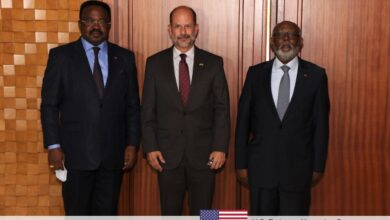 COVID 19 – Conspiracy or Apocalypse? – Part I