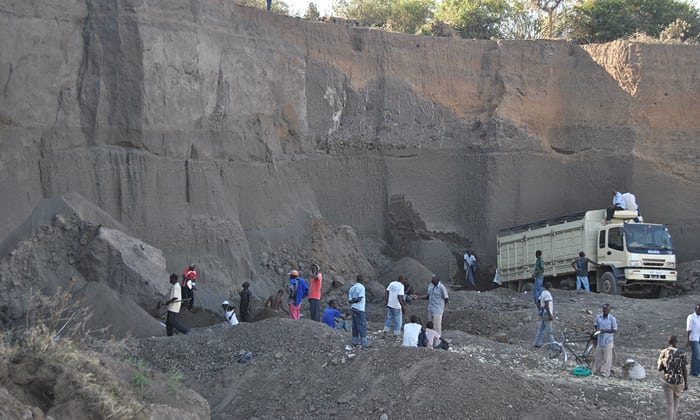 Residents of Mbeere south, Eastern part of Kenya are crying foul over sand harvesting in the region which has caused child labour and health problems.

The rise in demand of the sand from the region because of its robustness has led many constructors to influx the area with the motive of distributions in all parts of the country.

The locals claim many are experiencing health challenges like respiratory problems as a result of the dust emitted from the quarries. They also lament over the disruption of learning in twelve schools located along the roads due to noise and dust from lorries ferrying sand.

During the dry seasons, the lorries blow clouds of dust, disrupting the school activities. It is also alleged that boys from poor families drop out of school to work in the quarries.

The area Education Board Chairman James Kanya moan the many cases of absenteeism as boys withdraw from class to engage in sand harvesting to support their families.

Kanya has implored the parents to value their children’s education. “When the economy slow down due to recurrent droughts, they have to look for ways to survive without involving their children in sand harvesting,” he said.

Earlier, the residents had gone to streets demanding an immediate end of sand harvesting in their semi-arid region, however their demonstration thwarted it for a short while as the later swung into full gear.

“We did not succeed in our effort due to cartels controlling the sand business,” reiterated one of their leaders. They leaders vowed to resort to road blockade as a way of putting to an end the menace business.

Meanwhile, the area legislator Geoffrey King’angi has proposed tarmacking of roads leading to the sand mines to end disruption of learning by the dusts and noise blown by the lorries.

“We want the government to construct a road dedicated to sand transportation,” King’angi  said.

Peter Njiru, one of the pastors from the region also decried over immorality caused by the commercial sex workers who have invaded the area.

Two years back the residents blocked the roads and forced lorries carrying sand to pour it and obstructed others from proceeding to quarries.