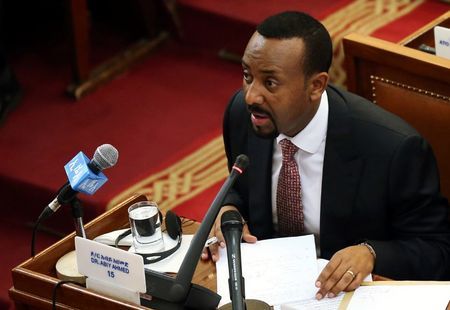 ADDIS ABABA (Reuters) – Ethiopia’s prime minister said on Wednesday that ending war and expanding economic ties with neighboring Eritrea is critical for stability and development in the impoverished Horn of Africa region.

Abiy Ahmed’s remarks followed the announcement on Tuesday by his ruling coalition that Ethiopia would fully implement a peace deal signed in 2000 and meant to end a two-year war that devolved into a stalemate resulting in huge military build up by both countries.

The pledge would entail ceding a disputed town to Eritrea. There was no sign on Wednesday that Ethiopia had begun withdrawing its troops from the town of Badme.

It is one of many policy shifts announced since the 41-year-old took office in early April, moves that could reshape Ethiopia’s relations with its neighbors and have equally dramatic impacts inside the country of 100 million people.

Whether the new measures, including liberalization of the state-controlled economy, end up addressing critical challenges from high youth unemployment to rising government debt remain to be seen. But they are shaking the country up.

“All that we have achieved from the situation of the last 20 years is tension,” Abiy said.

“Neither Ethiopia nor Eritrea benefit from a stalemate. We need to expend all our efforts toward peace and reconciliation and extricate ourselves from petty conflicts and divisions and focus on eliminating poverty.”

Ethiopia’s move is a “drastic departure” from its longstanding – and failed – policy, said Ahmed Soliman, Ethiopia analyst at Chatham House, a London-based thinktank.

“To see some movement is extremely positive. This is the most important latent conflict within the Horn and its resolution is important for peace and security in the region.”

Eritrea used to be a part of Ethiopia and waged a 30-year struggle for independence. The war on their shared border between 1998 and 2000 killed tens of thousands of people, caused significant displacement and the splintering of families.

Eritrea’s government has not responded publicly to Addis Ababa’s offer of an olive branch late on Tuesday. The two nations cut ties during the war.

Asmara’s Information Minister told Reuters on Tuesday evening he had not seen the Ethiopian government’s statement so could not immediately comment. He did not respond to phone calls on Wednesday.

Eritrea has long said it wants Ethiopia to pull its troops out from the disputed territory before normalizing ties, citing a decision by a boundary commission at The Hague which awarded the village of Badme to Eritrea in 2002.

Asmara has long felt betrayed by world powers, who they say failed to force Ethiopia to abide by the commission ruling.

Ethiopia says the row over border demarcation can only be resolved through a negotiated settlement.

On Tuesday, an Ethiopian foreign ministry official told Reuters that there were “at least 61 attempts” to mediate between the two nations, but that Asmara had rejected all requests.

Russia, the European Union, and Qatar were among those that proposed to mediate in the last two decades, he said.

Abiy said Ethiopia needed to resolve what he seemed to view as a costly and pointless dispute.

“Putting an end to this situation and finding peace is necessary beyond anything else not just for Ethiopia but for the wider Horn of Africa,” he said in a speech in Addis Ababa.

“Every Ethiopian should realize that it is expected of us to be a responsible government that ensures stability in our region, one that takes the initiative to connect the brotherly peoples of both countries and expands trains, buses and economic ties between Asmara and Addis Ababa.”

Diplomats say punitive measures taken against Eritrea may prevent an immediate conclusion to the dispute.

The U.N. Security Council imposed an arms embargo on Eritrea in 2009 on charges that Asmara provided political, financial and logistical support to militant groups in Somalia. Eritrea has long dismissed the claims, saying they are concocted by Addis Ababa in a bid to isolate the country and divert attention from Ethiopia’s reluctance to hand over the disputed areas.

“The Eritrean government has always proclaimed its innocence and will demand that the sanctions are promptly lifted. This could be a sticking point for now,” said a Western diplomat in Ethiopia.