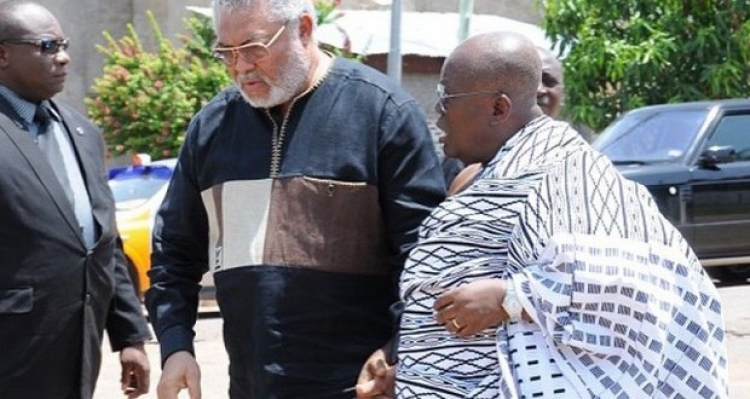 Ghana’s Former President John Jerry Rawlings says the constant lies being peddled by some members of the opposition National Democratic Congress (NDC) about his family makes it difficult for him to criticize President Akufo Addo led administration.

Delivering a durbar to commemorate the 39th anniversary of the June 4 revolution in Accra, Mr. Rawlings said he finds it difficult to believe some of the scandals that are being reported about the Akufo-Addo led government because of the lies that are regularly peddled about him and his wife.

“When you say I don’t criticise Nana Addo or the things he does, to be quite honest I don’t know what to believe or to disbelieve because I know some of the things our people say about Martin Amidu, my wife and myself are false,” the military dictator said.

But majority of his party members have accused him for treating the current government with kid gloves despite the many scandals that have rocked the NPP administration in less than 2 years in power.

Background of the June 4 revolution

The revolution sparked when the then military government of the  Supreme military Council (SMC II) of General F K. Akuffo put then flight Lieutenant Jerry John Rawlings on public trial for attempting to overthrow the government on May 15th 1979. This happened because Rawlings was a junior soldier in the Ghanaian Army who with other soldiers were refused to be given their salaries.

Rawlings turned the trial against the government by accusing it of massive corruption and requesting that his fellow accused be set free as he was solely responsible for the mutiny. He was incarcerated. His diatribe resonated with the entire nation as there was massive suffering.

In the night of June 3rd 1979, junior military officers including Major Boakye Djan broke into the jail where Rawlings was being held and freed him, and ostensibly marched him to the national radio station to make an announcement. The first time the public heard from Rawlings was a now legendary statement that he Rawlings had been released by the junior officers and that he was under their command. He requested all soldiers to meet with them at the Nicholson Stadium in Burma Camp in Accra.

The entire nation went up in uproar. The soldiers rounded up senior military officers including three former heads of states, General F. K Akuffo, Ignatious Kutu Acheampong and Afrifa for trial. They were subsequently executed by firing squad.

What Food Means to Me