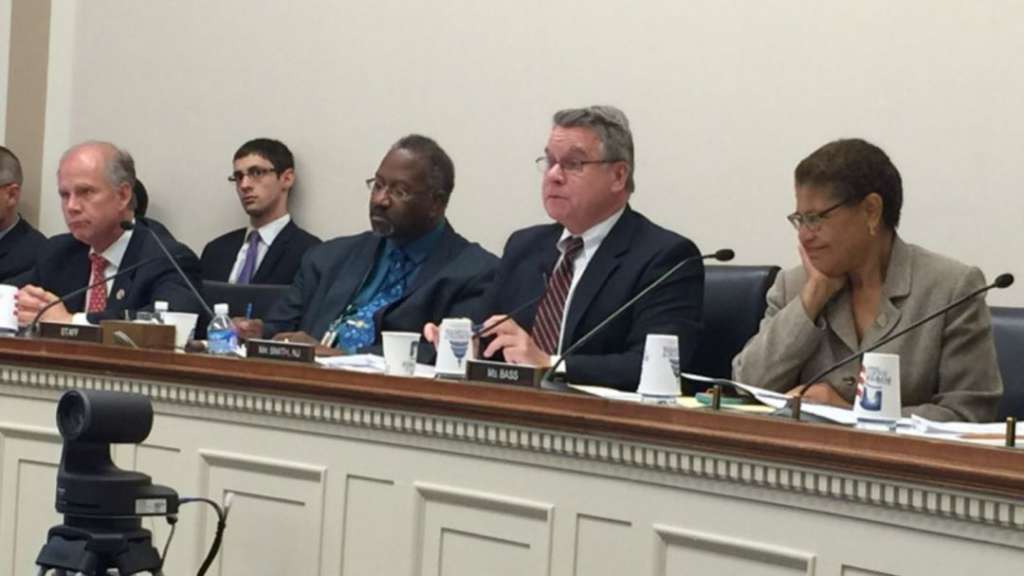 The U.S Subcommittee on Africa, Global Health, Global Human Rights, and International Organizations chaired by Chairman Rep. Christopher Smith on 27 June 2018 heard from the Acting Assistant Secretary Bureau of African Affairs, Hon. Donald Yamamoto and Southern Cameroonians on the roots of the Anglophone Crisis in Cameroon.

In his opening remarks, Chairman Smith stated that “In order to prevent the long-simmering Anglophone conflict from destabilizing a critical U.S security partner in the region, U.S. policymakers must understand the legitimacy of grievances and the social, constitutional and historical context of the present discontent in The Republic of Cameroon.”

All speakers who gave their testimonies before the U.S Subcommittee on Africa, Global Health, Global Human Rights, and International Organizations concurred with Chairman Smith stating that the road to addressing the current Anglophone Crisis in Cameroon opens only if all the actors both in Cameroon and international actors agree on what the root cause/s of Anglophone Crisis are; Agbor Nkongho, a human rights lawyer, nonviolent activist and founder of the Centre for Human Rights and Democracy in Africa (CHRDA) in his written testimony provided critical insights on the constitutional roots of the Anglophone Crisis in Cameroon.

Almost everyone who presented a testimony before the U.S Subcommittee on Africa, Global Health, Global Human Rights, and International Organizations agreed that the crisis in Cameroon is escalating. Agbor Nkongho said that Cameroon is “a nation sliding into civil war.” Adotei Akwei the Deputy Director of Amnesty International United States said: “the human rights situation in Cameroon is alarming, it is worsening, and the government of President Paul Biya–who has been in power for over 30 years–has to date, shown little inclination or political will to effectively address the crisis.” Hans De Marie Heungoup Central Africa Senior Analyst at the International Crisis Group echoed the same sentiments adding “The ongoing  conflict  in  the  Anglophone  regions  is  now  the  biggest  security  threat  to  Cameroon stability, which if left unaddressed could turn into civil war.’

All of them largely agreed on what the root cause of the Anglophone Crisis is, that is, the expression of a poorly managed decolonisation process, that saw two distinct (British Southern Cameroons and French Cameroon) people come together to form a country void of any real foundations that could guarantee coexistence.

While there are also other causes highlighted by all the persons who gave testimonies, the focus of this article is not about highlighting these causes but highlighting the recommendations forwarded by the speakers. This is because the most important thing at this stage is to try and calm down the Anglophone Crisis which continues to get worse, something made more critical by the impending presidential elections set for October this year. There are growing fears among Southern Cameroonians that if the Anglophone Crisis is not brought to an end prior to the elections, there is a high risk for no voting in Anglophone regions.

Those who gave testimonies agreed that the is need for the US to intervene in restoring normality in Cameroon as the crisis in South Cameroon if not combated can lead to civil war in addition, if not combated, the Anglophone crisis can spill over into neighbouring countries such as Nigeria and Equatorial Guinea, countries sheltering political refugees from Cameroon thereby destabilising the region as well as disrupting commerce, trade and business.

The US must, therefore, intervene in the Anglophone Crisis to try and bring an end to the crisis by pressuring the Paul Biya government to allow independent investigations into alleged crimes against humanity and gross abuses of human rights by credible international bodies, regional partners and national civil society organisations. These organisations also have to force the Biya administration to take the necessary measures to prevent the excessive and unnecessary use of force, arbitrary and incommunicado detention, torture, deaths in custody, enforced disappearances, and inhumane prison conditions. In the same line, the US also ought to call for the release of all prisoners linked to sentences from the anti-terrorism law and the 47 Cameroonians deported from Nigeria.

To bring immediate relief to the suffering masses both displaced in Cameroon as well as those who have fled to seek refuge in neighbouring Nigeria, the US must lobby other international actors into mobilising humanitarian aid basics such as food hampers.

The US Congress to hold frequent hearings on Cameroon including a full committee hearing, Centre for Human Rights and Democracy so as to keep the pressure on President Paul Biya so he acts expediently. In the same vein, insist to the Cameroon government to engage in inclusive dialogue on Federalism and Independence of Southern Cameroons with legitimate leaders of the people without preconditions. The US also needs to take the first steps in identifying national mediators including churches, in preparation for an inclusive dialogue between the Paul Biya government and leaders of the Ambazonia separatist group/s.

The US also needs to urge its United States Ambassador to bring the crisis for debate at the United Nations. Once the crisis is brought before the United Nations, there is a high likelihood that the move will pressure Paul Biya into action whether in calling for an inclusive dialogue or any other action that may result in bringing to an end the current violent scenes in Southern Cameroon.

The US also needs to maintain its current stance in condemning all forms of violence on both sides and place travel restrictions and sanctions on government members fuelling the crisis. In preparation for the upcoming elections, the US also needs to press Paul Biya to call international credible observers early on so as to monitor the prevailing political environment.