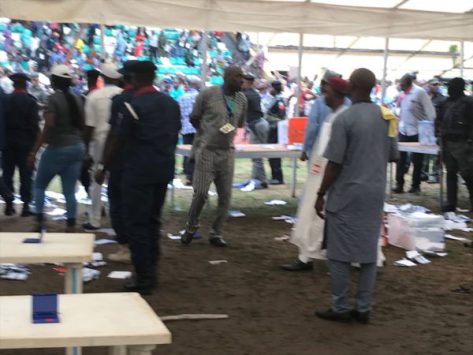 It is no longer news that the All Progressives Congress (APC) have failed to conduct its party primaries to produce a gubernatorial candidate that will carry the party’s flag in the July 14th 2018 governorship election in Ekiti state as reports available to us from Ado-Ekiti the state capital reveals how chaos, alleged electoral malpractice and violence led Gov. Al-Makura to suspend the process indefinitely.
Disgruntled agents were said to have disrupted the process when news around the venue was that some party delegates were openly being tutored on which candidate to vote for. Our correspondent reported that despite a little disruption of the process by the elements, actual voting by delegates began at about 3:45pm after accreditation of delegates had lasted for more than 8 hours.
According to Mr. Sam Akintola a journalist who was on ground to witness the whole scenario, what really happened was that after 5 Local Government Area delegates have concluded their votes out of the 16 LGA’s in Ekiti state, it was discovered that most of the delegates who had voted were allegedly been induced by agents and party officials loyal to former governor and Hon. Minister of Solid Minerals, Mines and Steel, Dr. John Kayode Fayemi (JFK).
He further revealed that other agents got wind of this development when they discovered JKF boldly written at the back of the accreditation cards of most of the delegates who had been voting. This suddenly resulted in protests by the agents of other candidates who had alleged that the delegates may have been induced to vote in a certain direction which is against the spirit of the contest.

As important as the Ekiti election is to the Presidency and the national leadership of the APC, both had impressed it on members that it had no preferred candidate among the 33 contenders.

This was the position of the party leadership and it was made known during the inauguration of the electoral committee. The APC’s National Organising Secretary, Sen. Osita Izunaso, who, on behalf of the party’s National Chairman, Chief John Odigie-Oyegun, inaugurated the Governor Umaru Al-Malkura led 5-member Primary Election Committee, told members of the committee, in clear terms, that nothing short of transparent primary was expected from them.

Recall that the Chairman of the APC primary election in the state Gov. Tanko Al-Makura of Nasarawa state had assured all the candidates and stakeholders of a transparent and credible primary election that would produce the APC candidate for the July 14 gubernatorial election.
Speaking exclusively with Senator Ayo Arise one of the aspirants for the governorship ticket, the former lawmaker who had earlier raised concerns about the possible hijack of the process by a certain candidate in an interview with Uchechukwu Ugboaja during the APC’s screening exercise in Abuja, revealed that allegations of electoral malpractice by agents of a particular candidate was what triggered the chaos that led to the disruption of the entire process.
According to him, “Allegations of electoral malpractice by a certain agent caused tempers to flare when some people started kicking the ballot boxes and destroying electoral materials, but it all began when unauthorized persons found their way into the venue after the heavy downpour, this was also followed by allegations of persons replicating the delegate badges.” 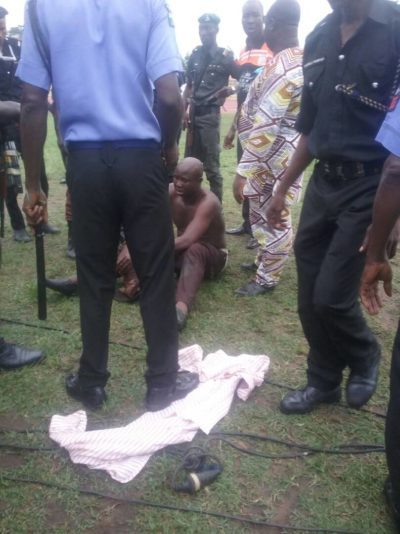 Even though there were all manner of accusations and counter accusations the former lawmaker stated that the Chairman was in charge as he summoned all the aspirants to a closed door meeting where they all admitted that since the integrity of the process had been compromised the only way the party can move forward on the issue is to have this process suspended and a new date announced.
An exclusive video made available to yours truly showed a group of APC delegates chanting anti – Fayemi slogans after voting materials were destroyed as a result of the protest which led to the cancellation of the APC primary election by the Chairman Gov. Tanko Al-Makura.
We may be reminded that on October 15, 2014, some Ministers serving under President Goodluck Jonathan resigned from the cabinet, on President Jonathan’s instruction, to pursue their governorship ambition in their various states. They were Nysom Wike, Obanikoro, Labaran Maku, Samuel Ortom, Emeka Wogu, Dr. Onyebuchi and Darius Ishaku. The governorship election was actually scheduled for April 11, 2015, almost 6 months before the election, and to make sure they didn’t use government money for their elections, they were forced to resign.
However, with the Ekiti governorship election coming up on the 14th of July, 2018, political watchers are concerned if Mr Kayode Fayemi, who is still comfortably seated in the Executive Council as a Federal Minister is not one of the main reasons why the controversy around the APC’c guber primaries may just have began. An election that is just about two months away, one could easily be left in doubt if the former governor is not prosecuting his election ambition with government money.
Other strong contenders amongst the 33 aspirants for the sole ticket of the party include former governor Segun Oni, Babafemi Ojodu who is currently a Special Adviser to the President, Congressman Bimbo Daramola, Chief of Staff to the Deputy Speaker House of Representatives and former Senate member, Sen. Gbenga Aluko.
Others are Hon. Michael Opeyemi Bamidele, Hon. Femi Bamisile a former Commissioner and Rt. Hon. Bamidele Faparusi a former Speaker of the State House of Assembly.
Meanwhile the state ruling People’s Democratic Party (PDP) led by Gov. Ayo Fayose are scheduled to conduct their primary election on the 9th of July. The outspoken governor remains upbeat that any candidate eventually produced by the APC will only end up being defeated by his party which he has described as a sleeping lion.

According to him, “Nigerians have seen the deceit called the APC and their failed government. They can see the difference. The PDP is a lion that has been woken from sleep.

“We are taking over at the federal level next year and by the grace of God, we are winning the Ekiti governorship election. We have done well in the running of the state and our continuity agenda stands firm.

“When we defeated the APC in all the 16 local government areas of the state in 2014, they went to town with a lot of lies.

“Now their party is in control at the federal level, we are waiting for the excuse they will give, as they will certainly suffer another humiliating defeat,” he said.