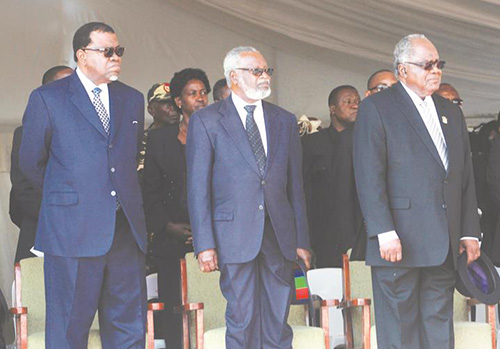 Windhoek – For Namibia, the work of the Organisation of Organisation Unity (OAU) Liberation Committee and the solidarity of the African people were instrumental in securing the Namibian independence, said President Hage Geingob.

“It is why our future progress will remain intimately tied to the success of the African continent and its people,” President Geingob said in his Africa Day message on Friday.

Africa Day, marking the founding of the OAU on 25 May 1963 is a key moment in the history of the African continent.

He said the formation of the continental body, that has since transformed into African Union, does not only shine light on Pan-Africanism as an ideology of liberation and decolonization, but crucially, it also aligns our independence to the unity of the African continent.

“Africa is free. We are now in the second phase of our struggle in which the noble ideal of shared economic prosperity for all is not secondary, but an indispensable condition for a sustainable African future.

“The work of the African Union through Agenda 2063: The Africa We Want remains important in ensuring that the majority of Africans have access to decent housing, health, education and economic opportunity.

“To fight poverty, inequality and marginalization, and to unlock opportunities for our shared prosperity, particularly for our young people and future generations, we should encourage deeper economic integration; increase people-to people exchanges and make more investments in infrastructure to facilitate trade”.

The President emphasized that peace, security and effective governance “are the conditions sine qua non for our shared prosperity in the New Africa. In line with Agenda 2063, we have to silence the guns by 2020, for an Africa of opportunity for the majority to become a reality.

“We cannot create opportunities for our youth if we do not create accountable and transparent institutions, and intensify efforts to fight corruption. The decision by the African Union to dedicate its theme for 2018 to the fight against corruption is a step in the right direction. Concerted efforts should follow.

“I have no doubt that with more determination and focused implementation of policy; our vision of a united and prosperous Africa will become a reality. We have a unique opportunity to create sustainable conditions for our collective success.

On this Africa Day, we should reaffirm our commitment to work for a better Africa, a New Africa, and a different narrative for our continent”.

Africa Day signify victory against formal colonialism on the continent. “The rise of Africans against the brutality of imperialism and colonialism – Africans, conscious that they had the right to determine their own destiny, pursued through different forms of resistance and armed struggle, the systematic dismembering and termination of colonialism,” he said.

Geingob stressed that Africans need to pause, reflect and remind themselves with courageous deeds by the Pan-Africanist movement from its base in the Diaspora, led by influential activists and academics, including W.E.B DuBois, Henry Sylvester Williams and Edward Blyden, to leading nationalists such as Nkwame Nkrumah, Jomo Kenyatta, Julius Nyerere, Modibo Keita and Ahmed Sékou Touré.