Government spokesman Lambert Mende blasted Macron for “dog-whistle remarks” that he made last Wednesday in Paris after meeting with Rwandan President Paul Kagame, who is also the AU’s current chair.

The comments caused “discomfort, not to say anger” in Kinshasa, Mende told a press conference.

Macron had said, “France supports the initiative taken by the president of the African Union, in strict concertation with the president of Angola,” but did not elaborate. Angola President Joao Lourenco was visiting Paris on Monday.

The verbal broadside from the DRC comes in a context of mounting tensions ahead of presidential elections scheduled for December 23.

Countries in central Africa are casting a worried eye, amid fears that the sprawling, volatile state could spiral once more into war, possibly drawing them into it.

DRC President Joseph Kabila, 46, has been in power since 2001 and should have stepped down at the end of 2016 after he reached his two-term constitutional limit — a constitutional clause has allowed him to remain in office until his successor is elected.

Kabila’s presidency has been stained by a reputation for corruption, oppression of free speech and poor governance. The DRC’s armed forces are struggling to repress conflict in the vast, lawless east, which is under the sway of multiple rebel groups.

Mende said, “We do not accuse the French president of anything. The question is about knowing what may have been said between him — because he spoke about it — and the president of Rwanda concerning the DRC without us knowing about.”

“When the answer comes, if it is unsatisfactory, you can be sure that we will draw all the consequences,” Mende said.

“No-one has the right to envisage solutions to our problems without us,” he said, condemning “people who are nostalgic for the colonial order” and “closed-door meetings and open plotting against our country’s sovereignty.”

The representatives of France, Rwanda and Angola were called to the foreign ministry in Kinshasa on Saturday after Macron’s remarks.

Previous conflicts in the DRC — from 1996-97 and from 1998-2003 — sucked in countries around central Africa, including its neighbours, Angola and Rwanda.

Mende on Monday did not address speculation about whether Kabila would run again in the elections, which are at the legislative and local level as well as presidential.

But he made it clear Kabila planned to remain a key figure in national politics through his role as party chief.

Kabila “is head of the presidential majority,” Mende said, referring to the majority of pro-Kabila MPs in parliament.

Now is the time for quality economic diversification in Cameroon

On the road with Niger’s peacekeepers in Mali 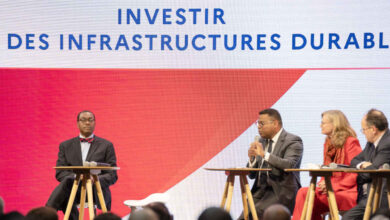