Statement by Ambassador Jonathan Allen, UK Deputy Permanent Representative to the UN, at the Security Council Briefing on Libya

Thank you very much, Madam President. Thank you to Ambassador Skoog for his briefing. And let me also very much welcome the briefing of the Special Representative of the Secretary-General (SRSG) Ghassan Salamé, and also for your report. We fully your work and your efforts, SRSG Salamé, to deliver the UN roadmap.

The UK welcomes progress towards national reconciliation through the National Conference process. It is important to do all that we can to support all Libyans to have a stake in the political process. As we have said for some months now, the status quo is not sustainable, so we welcome the efforts to prepare for elections. It is extremely positive that 2.4 million Libyans have now registered to vote reflecting the popular demand for an end to the transition period and eagerness to engage in a democratic political process. Libyans want to break the political impasse and move their country forward. But the Libyan people are suffering because of divisions and disagreements between their leaders. As the UN has set out, there are three elements which need to form part of the political sequence: the constitution, parliamentary elections and presidential elections. It is important to manage that sequencing so that credible elections are delivered and stability is promoted.

So before elections can take place, Libya’s leaders must agree to an inclusive political package on the technical, security and political measures needed to ensure that elections will be inclusive, peaceful and that the results will be accepted. As an international community and a Security Council, we need to deliver a single unified message and all national efforts must be in support of, and co-ordinated with, the United Nations.

Turning to the economy, we welcome the 2018 budget agreed on 9 May which will allow the government to support vital public services. Libya’s leaders need to work together now to address the suffering of the Libyan people while preparations for elections continue. They urgently need to agree economic reforms, to unify Libya’s economic institutions and to resolve the dispute over the Central Bank Governorship.

Finally, turning to security. The lower casualty rates since the start of 2018 are most welcome, but tragedy continues to strike, including the attack on the High National Election Commission on the 2 May claimed by Da’esh. It is a stark reminder that these groups are still working to undermine the democratic process. We in the international community must make a concerted effort to help bolster electoral security arrangements so that the Libyan people can exercise their democratic right without the threat of violence. We recognise that the fighting, particularly in Sebha and Derna, demonstrates deep divisions in Libya. This fighting is increasing the suffering of the Libyan people and being exploited by extremists. And Madam President, whilst talking of exploitation, we still recall the shocking reports of what appeared to be slave auctions run by migrant traffickers. We must take action to signal that traffickers cannot act with impunity; the UK fully supports efforts to do this, including through our sanctions regime.

Madam President, 2018 is a crucial year for Libya. It presents a great opportunity to finally deliver what the people of Libya have demanded for so long: a peaceful, secure, prosperous country and an opportunity to have a say in how this is achieved through credible elections. The international community must work together with the United Nations to support Libya’s leaders to deliver. To fail now is to invite more suffering, more wasted opportunities and more threats to all of our peace and security. 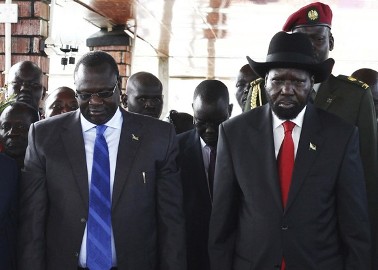