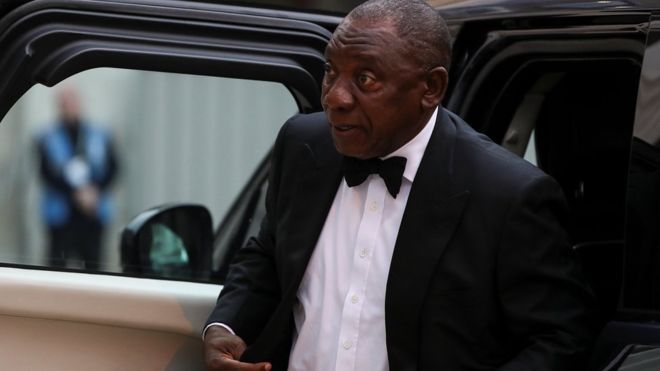 South African President Cyril Ramaphosa has cut short his attendance at the Commonwealth summit in London to deal with violent protests at home.

Clashes have taken place in North West province where protesters are demanding jobs, housing and an end to corruption.

Shops have been looted, roads barricaded and vehicles set alight.

President Ramaphosa, who took office in February, has sought to encourage investment in South Africa during his visit to the UK.

Mr Ramaphosa is scheduled to hold meetings with ANC leaders in the provincial capital Mahikeng on Friday, his office said.

“To pay attention to the situation in the North West, the president has decided to cut short his participation in the Commonwealth Heads of Government Meeting in London where he is leading a government delegation,” a statement said.

Mahikeng has been at the centre of the latest disturbances – dubbed “service delivery protests” – and streets were reported to be deserted on Thursday after bouts of looting and clashes with police.

Mr Ramaphosa has called for calm and ordered police to exercise restraint.

Mr Mahumapelo’s office has denounced the protests as an attempt to discredit him.

“[It is] an anti-Supra Mahumapelo political campaign which seeks to intimidate residents of Mahikeng‚” spokesman Brian Setswambung said, according to Timeslive.

Neighbouring Botswana said it had closed exit points along its shared border with North West province.

South Africa’s faltering economy has been a priority for Mr Ramaphosa since he took over from former President Jacob Zuma.

Growth had been weak and unemployment painfully high as Mr Zuma’s leadership was dogged by years of corruption allegations.

In a recent interview with Bloomberg in London, Mr Ramaphosa said he was seeking $100bn (£71bn) in investment to help kick-start the economy.

He said his government was determined to tackle corruption.