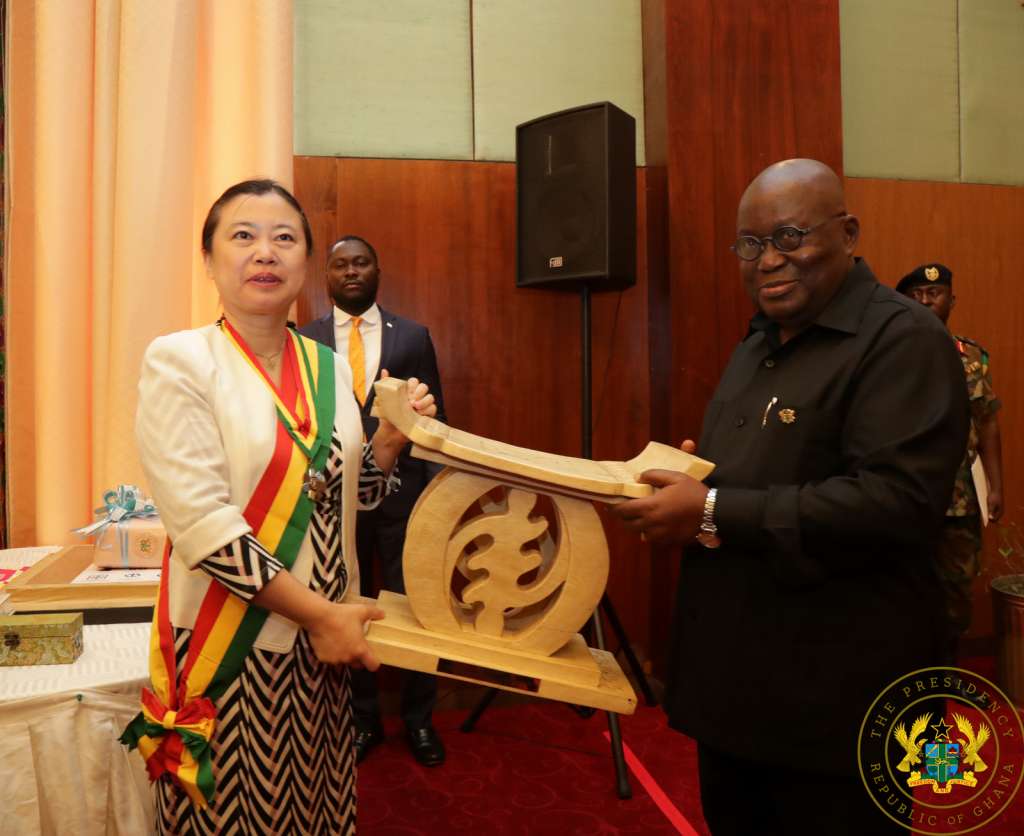 President of the Republic of Ghana, Nana Addo Dankwa Akufo-Addo, has urged the outgoing Ambassador Extraordinaire and plenipotentiary of the People’s Republic of China to Ghana, Mrs Sun Baohong, to be a strong advocate for Ghana, when she returns to China.

“When you go back to China, you will be the voice of Ghana in high circles in China, and continue to promote this strong relationship between our two countries,” President Akufo-Addo told the diplomat who has come to the end of her 4 year duty tour of the West African country.

The President made this known at a farewell lunch and a citation honoring ceremony for Mrs Sun Baohong at the Jubilee House at his request. Explaining the rationale for the honour, President Akufo-Addo stated that Mrs Baohong had become “a great friend of our nation, and whose tour of duty here in Ghana has witnessed a significant and tremendous expansion of co-operation and friendship between the Peoples’ Republic of China and Ghana.”

The President noted that Ghana-China relations date back to the very early years of Ghana’s independence, and were rekindled in the period of the leadership of President John Agyekum Kufuor, in the year 2001 to 2008, resulting, amongst others, in the construction of the Bui Dam.

“Everybody who is an objective and impartial observer of the happenings in the country would agree that these last four or five years, where our guest of honour has been the Chinese Ambassador, have witnessed a truly remarkable development in this relationship,” he said.

The President on how the outgoing Chinese organized an official visit to China for the then Vice Presidential candidate of the New Patriotic Party, Alhaji Dr. Mahamudu Bawumia, and now Vice President of Ghana said, “It was an unusual event. The leaders of the opposition are not usually the beneficiaries of official largesse from governments in power, because we know how tricky crossing that line can be. But she recognized, and the Chinese government did too, that Ghana is an increasingly vigorous democracy, and the possibility always existed that their invitee would be what he is today, the Vice President of the Republic.”

He continued, “She had the foresight, and it struck me, at the time, as an unusual gesture of friendship and solidarity, and I felt that when the occasion came, I should say so in public of how much I appreciated that gesture.”

President Akufo-Addo also made reference to “her final act of her tour of duty”, as Mrs Sun Baohong executed, with the Finance Minister, Ken Ofori-Atta, a series of agreements where China has offered $66 million to Ghana for the construction of the Jamestown Fishing Port Complex.

“It is an important initiative to see to the revival of that part of Accra, which has falling into significant decline. That initiative, when it becomes real, will make a large impact on the lives of the people of Jamestown. The balance will go into the completion of the next phase of the University of Health and Allied Sciences,” he said.

President Akufo-Addo stressed that Ambassador Sun Baohong “went that extra mile for Ghana”, adding that “that is what, in the brief period that I have seen here, has been the hallmark of her period as Ambassador to Ghana.”

She stated that “It demonstrates your Excellency’s strong commitment to promoting China-Ghana friendship, and further development of our relations. I have only fulfilled my duty as an Ambassador whilst, Your Excellency, the government and people of Ghana have given me much more.”

Singling out Ghana as one of China’s largest trading partner, and main source of foreign investment, she said the bilateral trade volume had risen from $5.6 billion USD in 2014, to $6.68 billion in 2017, with Ghana’s exports to China reaching a historical $1.85 billion mark.

She lauded Chinese investments in Ghana, saying, “The Chinese side has implemented a dozen of major coperation projects through grants and loans. Those projects have made important contribution to Ghana’s economic development and improvement of people’s livelihood.”

Concluding, she stated that, “I came to Ghana with hopes and dreams, yet I leave the country with friendship and honour.”

Rwanda: ‘You Are Not Alone. Rwanda Is Your Family,’ – President Kagame Comforts Genocide Survivors On Kwibuka23